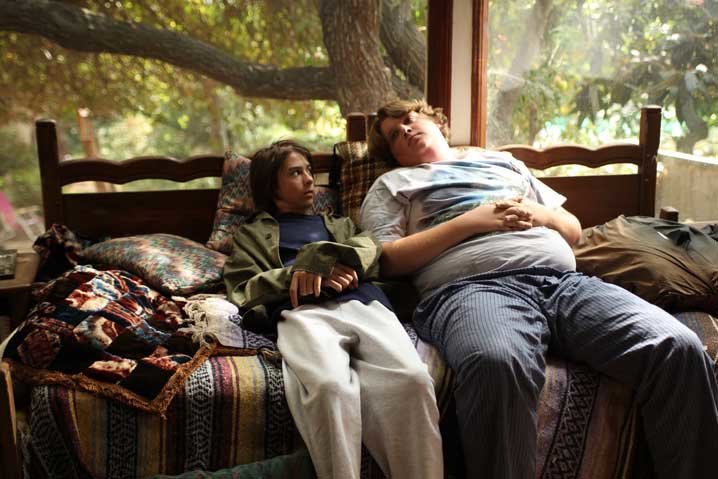 "Azazel Jacobs's profile has grown steadily since he made his striking, black-and-white debut feature, Nobody Needs to Know, in 2003," writes Nick Dawson, introducing his interview for Filmmaker, where Jacobs also writes a bit about the biggest surprise he encountered while making Terri. "He followed it in 2005 with the delightfully quirky and inventive The GoodTimesKid, a film which found a devoted audience on the film festival circuit and was eventually released theatrically in 2007. Jacobs's third feature, Momma's Man, a poignant tale of adult regression into childhood, had its world premiere at Sundance. It became one of the hits of the 2008 festival, and played in theaters later that year to universal acclaim. Jacobs, the son of experimental filmmaker Ken Jacobs, grew up in New York City and is now based in Los Angeles, and his first three features were all set in one or the other of those two cities. With Terri, his fourth film, he moves into new territory as he tells a touching tale of a obese, socially withdrawn teenager (Jacob Wysocki) in a small California town who develops a surprising friendship with his high school headmaster (John C Reilly)."

For Anthony Kaufman, writing for Screen, Jacobs "has created a beautifully subtle and wholly original take on the high-school-set coming-of-age film. While the slow-building delicate approach may alienate mainstream audiences expecting the old conventions of the genre, the film ultimately pays deeply affecting dividends in its final stretch."

"Humanistic without being moralistic, and very funny, Terri is a measured, observational examination of the stratification of teenage loser-dom," blogs Karina Longworth for the Voice. "It sketches out the steep learning curve of high school, in which the playing field between a mean-spirited burnout and a sweet kid who simply doesn't fit in is leveled with a single incident, and a lapse in self confidence can plunge a would-be mistress of the universe several levels down into the freakiverse. At the same time, Terri bitter-comically reveals that the disciplinary structure of teenage life is a farce compared to the muddled, endless purgatory of adulthood."

"The opening shot unequivocally shows how far the title character strays from the rigid template of high-school acceptability, unveiling obese Terri (Jacob Wysocki) in the bath," writes David Rooney for the Hollywood Reporter. "For reasons not divulged, he has been abandoned by his parents and lives on the wooded outskirts of an unidentified small town with his Uncle James (a touching Creed Bratton). A bookish granola type suffering from what appears to be Alzheimer's, James's windows of lucidity have grown increasingly infrequent. The film tends to leave background details for the audience to fill in, which is elegant, if slightly mannered. And [Patrick] deWitt's screenplay is stronger on dialogue than emotional development… If the lighter scenes sometimes lean toward sitcom cuteness, Jacobs has a sufficiently deft touch to get away with it. The territory often seems closest to that of NBC's unjustly short-lived Freaks and Geeks, which is by no means a bad place to be."

"Of all the things the world probably doesn't inherently need, another quirky coming-of-age Sundance flick about a lovable outcast who comes to appreciate his own individuality with the help of an oddball authority figure is probably fairly high on that list," writes HitFix's Daniel Fienberg. "But even a genre that you think can't possibly benefit from another iteration seems more worthwhile when executed properly and Azazel Jacobs's Terri takes a Sundance staple and does it right."

Jacobs "takes a conventional coming-of-age story and does it proud, enlivening the plot with an almost experimental portrait of alienation and despair," finds indieWIRE's Eric Kohn.

An entry in the US Dramatic Competition.