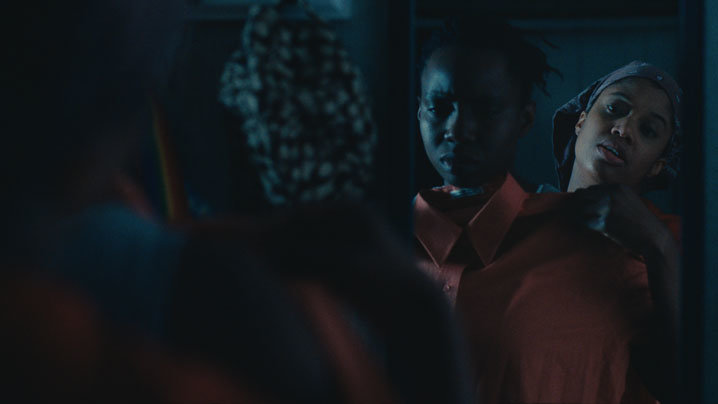 "In 2008, Dee Rees screened her short film Pariah at Sundance," blogs Mark Elijah Rosenberg for Rooftop Films. "Brimming with tension and pathos, the short built to a violent climax that was blunt and powerful. Three years later, Rees returns to the festival with her debut feature film, an elaboration on Pariah that brilliantly succeeds in both expanding the story and deepening the exploration of the characters. The overt violence is gone, traded in for an insightful give and take of love and need, anger and forgiveness, anguish and growth."

"Pariah is about the loosening of sexual and social expectations among black people in Brooklyn," writes the Boston Globe's Wesley Morris. "Its protagonist, Alike (Adepero Oduye), lives two lives. By day, she's a poet and straight-A student from a tight middle-class family. By night, she's a steely fixture at a new lesbian nightclub that she doesn't really like. This is essentially a coming-out drama that naturally blends humor and crisis without ever blowing a gasket… But the excitement and beauty of the movie is that it's not just a sexual coming-out but a racial one, too. She discovers she doesn't just like bohemian hip-hop. She likes hard black rock, too. Pariah is about the grunt work of identity politics. This is a 17-year-old girl trying to figure out what kind of black woman and lesbian to be."

The film "exhibits a sensitivity to the nuances of class and style among city-dwelling blacks that is not evident anywhere else in recent American cinema," declares Brandon Harris for Filmmaker. "This IS NOT Precious. While once again a black mother proves to be the fall guy (a two-note Kim Wayans), it isn't because of destitution, or drug use, or poverty, or neglect; it's the far more common affliction of over-protection and ignorance, of a muddled understanding of one's responsibilities as a Christian woman to love above all else. Aided by her remarkably talented cinematographer Bradford Young, who brought a similar grace to the palette and shooting style of the under-appreciated 2009 Slamdance entry Mississippi Damned (perhaps still the best recent American independent film without theatrical distribution), Rees has made a film that will hopefully make herself and her fantastic young lead Adepero Oduye stars, identity markers be damned."

John DeFore in the Hollywood Reporter: "Though shot on location in Brooklyn's Fort Greene neighborhood, Pariah is less interested in the story's locale than in capturing the private spaces — teenagers' bedrooms, restaurant stockrooms, abandoned piers — where personalities find their shape and formative relationships gel. Exceptional photography by Bradford Young does some of the movie's storytelling for it, making the world outside Alike's basement home rich and seductive."

"At times the script feels overly workshopped, with its naturalistic rhythms broken up by a few excessively expository subplots and third-act shifts that arrive with dishearteningly rigid precision," finds Andrew Barker, writing for Variety. "It's not enough to sink the pic, however, and the best scenes point toward a fine future for the director once her discretion catches up with her skill."

"After almost a decade of disappointing and at times embarrassingly bad feature films that consistently descended into stereotypical cliches, independent gay cinema may be on something of an upswing," suggests Gregory Ellwood at HitFix.

Screening in the US Dramatic Competition.

Update, 1/26: "Although the semiautobiographical story has heart and a streetwise freshness that feels unforced (Alike's environment is urban, but resolutely middle class), the film is marred by a miscast Wayans, whose falsely pained performance as the bad mother tick tocks between comically earnest and histrionic," finds Damon Smith at Reverse Shot. "Other conflicts, like Laura's yearning to find acceptance from her absent mother (what is it with demon moms?), feel stilted and extraneous — and too workshopped. None of this is likely to hurt the film's modest commercial prospects. Nor are the clichéd identity politics and well-worn themes of youthful self-expression (Alike is a budding poet who's drawn the interest of her AP English teacher) and finding one's way in the world. This is the kind of film that Sundance exists to incubate and coddle. For better and worse."