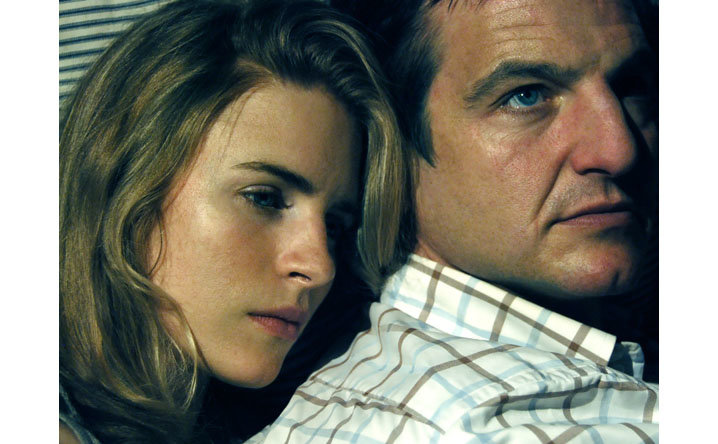 "It's a sure bet that you will be reading more about [Brit] Marling, a promising new talent and fashion-magazine-ready beauty who stars in and, with the director Mike Cahill, helped write Another Earth," predicts Manohla Dargis in the New York Times. "A story about parallel alien worlds, those interpersonal as well as interplanetary, Another Earth centers on Rhoda (Ms Marling), a bright young thing headed for MIT who, on the same night that a new planet called Earth 2 is discovered, plows her car into a family, killing a pregnant woman and her young child. Four years later Rhoda emerges from prison and reaches out to another survivor: the husband she made a widower (William Mapother as John). Out of this initially unlikely relationship, one that strains at reality even as it feels true, Mr Cahill and his appealing leads create a lived-in, absorbing world. For all the far-out space talk — true to its name, Earth 2 turns out to be a kind of mirror to the big blue marble where Rhoda has become somewhat of an alien presence — the movie has the delicate and rough texture of real life."

For Cinematical's Erik Davis, Another Earth is "one of several films screening at the 2011 Sundance Film Festival that uses a low budget to blend genres while presenting very relatable relationship stories that are infused with a sci-fi twist. Thankfully, Another Earth is one that pulls this off with great success — an emotional roller-coaster ride that focuses on identity and questions how much we know about ourselves, as well as how much more we're willing to learn… or forget."

This is "science fiction at its best," declares the Hollywood Reporter's Kirk Honeycutt. "Perhaps as startling as the film itself is the background of its creators. Cahill's background is documentaries, largely with National Geographic, while his co-conspirator, Brit Marling, worked as an investment-banking analyst before taking a sabbatical to co-direct the Havana-based doc Boxers and Ballerinas. The two wrote the screenplay for Another Earth with Cahill directing, producing, shooting and editing while Marling acts as his co-producer and star."

Variety's Justin Chang notes that the film "makes a virtue of its limited resources, selling the illusion of a groundbreaking scientific discovery just enough for audiences to accept it as a hypothetical premise; the scene that reveals the precise nature of life on Earth 2 raises serious goosebumps with little more than low-grade TV footage. Spare visual effects are impressively handled, and the recurring sight of another Earth, hovering above the horizon of this one, reps the sort of poetic, brazenly illogical image one could contemplate for hours."

Not only has Another Earth won this year's Alfred P Sloan Feature Film prize at Sundance, as indieWIRE's Brian Brooks reports, but Fox Searchlight's already picked it up as well, reports Dana Harris — also at indieWIRE, Christopher Campbell notes that "Another Earth was being linked to Moon long before anyone had seen it," while, for Eric Kohn, the film "suggests Andrei Tarkovsky's Solaris by way of Aaron Katz."

"The biggest surprise is how the movie began, and how it ended," Cahill tells Filmmaker.

Another Earth has screened in the US Dramatic Competition.