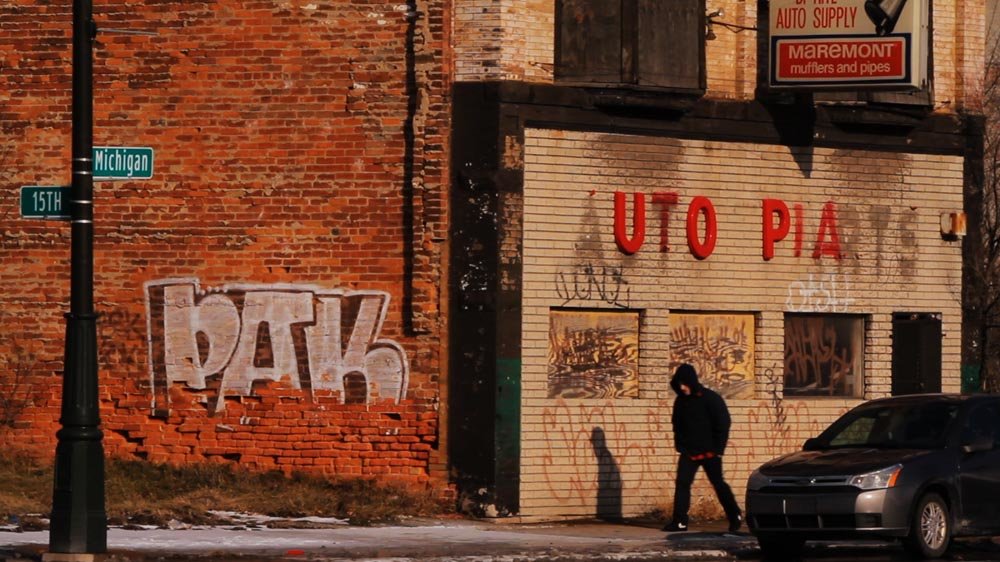 "Detropia is as much a ghost story as it is a documentary," writes Bilge Ebiri. "It's an impressionistic journey through the gray soul of a major American metropolis that is slipping — nay, has slipped — into nothingness, lonely but not quite empty…. Detropia privileges mood as much as it does context. There are extraordinary images here — an overhead shot of solitary, spectral figures walking along empty streets, or the blasted side of a demolished building waving uncertainly in the breeze, like some drunken beast. The result is a marvel, an achingly beautiful film about a town that once lay at the heart of the empire, and now seems to be drifting off its forgotten edges."

"As the jobs have disappeared from Detroit," writes the LA Weekly's Karina Longworth, "so have the people: at the start of the film, we learn that one family moves out of the city every twenty minutes, and 10,000 abandoned homes are slated for demolition. The city is, as its unpopular mayor puts it, 'broke,' so he announces a plan to 'consolidate' the community, asking people who live in outlying, underpopulated areas to move downtown so that the city can better provide them services. But moving costs money, and the city isn't offering a financial incentive. What the mayor's plan ignores — and the film powerfully brings into focus — is that many of those who haven't left Detroit are bound to their neighborhoods not just by financial constraints, but by an emotional connection to their city and its history." Karina notes, too, "the white hipster artists who are starting to colonize downtown Detroit (where an upscale loft apartment can apparently be purchased for $25,000 [!]), or of European tourists who blithely admit to have been attracted to the city for its 'decay.'"

The brackets are hers, but the emphasis at the end is mine. "What does it add up to, all this abandonment of lives and buildings, neighborhoods and property?" asks Jerry Herron. "It doesn't seem to add up to anything, other than the decontextualized spectacle itself and the demographic souvenir-hunting opportunities it provides. This city is never coming back; whatever happens next will be without urban precedent because the context of city no longer applies in this place where history has finally run out. And so the reason we come to Detroit — immigrants, tourists, artists, journalists alike — is to engage a fantasy about how we can always walk away from the past, from the now blown promise of an erstwhile prosperity that was once made real for generations of Americans. There's probably not a better place in this country, maybe in the world, for this kind of work."

Cunningham comes at the matter from a very different angle, from a "bored, angry skepticism towards the fetishism of crumbling concrete, cracked windows and hidden wastelands." And so, he has a very different project: "How might boredom with ruins be turned inside out and industrial ruin capital re-invested as anti-capitalist critique?"

More on Detropia from Eric Kohn (indieWIRE) and John DeFore (Hollywood Reporter); Filmmaker and indieWIRE interview Ewing and Grady. And one more recommended read, Ingrid Norton's "Letter from Detroit" in the Los Angeles Review of Books.﻿