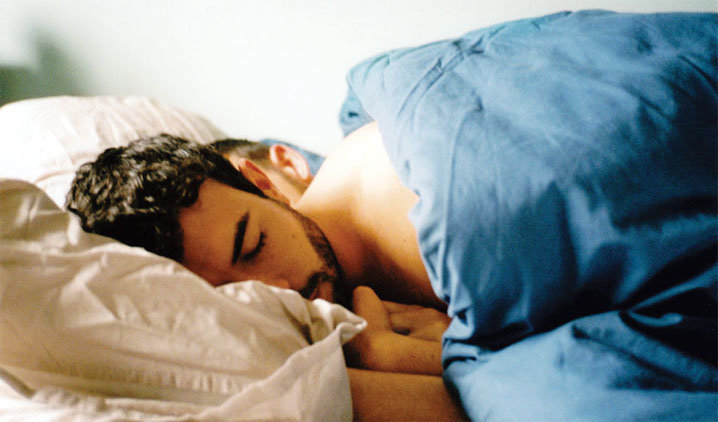 The world premiere of Andrew Haigh's Weekend made for a somewhat intimate Friday evening, and appropriately so. While another premiere, Source Code's, drew the bulk of the SXSW crowds, Haigh's second feature as a director (his years serving as assistant editor for the likes of Black Hawk Down, Shanghai Knights and Mona Lisa Smile — but also Mister Lonely — are behind him) played like a gay British Quiet City before an audience of, oh, maybe 20 or 25 people, some of whom, like me, were there on little more than a hunch. The gamble paid off. Weekend is one of the best films to screen at this year's festival so far.

Russell (Tom Cullen) has one foot in, one foot out of the closet, when he picks up Glen (Chris New), who turns out the next morning to be a man on a mission, namely, to confront straights with their fear of gay sex. His means will be an art project he'll be the first to admit is under-conceived and will most likely go ignored. The issue, though — whether and to what extent to wield your sexuality as a weapon against those who'd persecute you for it, however unconsciously — becomes one of contention between Russell and Glenn, the friction that proves the mettle of a love neither was looking for. The characters are full, the actors are up to the challenge, and the scenes roll out at a length you might not expect from a director whose day job used to be cutting for maximum efficiency. Whatever the size of the audience, Haigh must have been pleased to bring Weekend to SXSW. During the Q&A, he cited Joe Swanberg and Aaron Katz as influences. Mumblecore, it seems, has crossed the Atlantic and come back a little grittier, a little older, a little wiser. See the site for interviews with Haigh.

R Alverson's New Jerusalem is a sketch, an austere rough draft for a more substantial film. Lord knows there's material here. Ike (Will Oldham) is also a man on a mission: to convert Sean (Colm O'Leary) to Christianity, or, to put it in Ike's terminology, to have Sean surrender to God, to have him come into the light. Or, to put in terms Ike would be more likely to use if Alverson's research had matched his interest in the mindset, to accept Jesus Christ as his personal savior. Then again, Ike is hardly a studied theologian. He works at a used tire shop somewhere in the South (New Jerusalem was filmed in Richmond, Virginia) with Sean, an Irish immigrant who's recently returned from a stint with an army supply unit in Afghanistan. He's rattled, but unfortunately, all O'Leary is given to do to show it is either silently stare into the abyss or drop his face into his open hands. At first, Ike, played by Oldham with an almost frightening blank determination, seems to spot Sean as a potential notch in his Bible, but soon enough, his professions of brotherly love become intriguingly genuine. Can he, to put it bluntly, make the sale? It's a testament to Oldham's range that Ike and Kurt, the character he plays in Old Joy, come off as such different men even though their attempts at "male bonding" (Ike's phrase) meet the same end. IndieWIRE interviews Alverson.

Give Turkey Bowl five minutes or so to loosen up. That may be asking a bit much for a film that runs just over an hour, but once the cast gets over trying to force a sense of camaraderie onto the screen, once the characters stop telegraphing their traits and start living them, and the two teams of actors turn their attention to the annual game of touch football they've come out onto the field for, we can all just relax and have the breezy good time director Kyle Smith wants for us. It's that simple: old friends, and a couple of new ones, old alliances and rivalries, and yes, a couple of new ones — and one game, played out in close to real time. You can see where Eric Kohn's suggestion in indieWIRE that Smith is "a poor man's Robert Altman" comes from, but Smith isn't aiming quite that high. Nonetheless, he scores.

I have little to add to the awards and critical kudos Janus Metz has already garnered for Armadillo, the doc that follows a Danish unit to a base in Afghanistan and back — only that its "cinematic" scope (and I misuse the term intentionally) occasionally works against it, breaking its spell of authenticity.

Fightville is Michael Tucker and Petra Epperlein's most conventionally made but also most conventionally entertaining doc yet. Walking in, I hadn't even heard of Mixed Martial Arts, and once the film spent its first few minutes filling me in on the basic idea, I was dead set against it. But the tried and true techniques of documentary storytelling worked me over — colorful figures with tragic backgrounds, goals to attain, obstacles to overcome, the works — and sure enough, I found myself rooting for Dustin Poirer to beat the crap out of his next opponent and for Albert Stainback to get his shit together and get back into the game. Tucker and Epperlein cut the action to a steady, thundering beat, and resistance, while not exactly futile, is kind of pointless.

I'm tempted to "quip" that, with his latest film, Ti West has taken his penchant for mimicking cheap, formulaic horror a scare quote too far. But irony's got nothing to do with The Innkeepers. West seems to want nothing more than to recreate some movie he caught one afternoon after school, or more probably, an amalgam of movies he knew even at the time were kind of cheesy and unimaginative but that nonetheless made him jump or shriek once or twice. His embrace of clumsy dialogue and clockwork clichés might have been admirable in some odd way if he'd brought something new to the tradition — or, of course, if he hadn't run this route more successfully with The House of the Devil (2009). More from Peter Hall (Cinematical), Peter Martin (Twitch) and Gabe Toro (Playlist).

As for The Catechism Cataclysm, well, God bless Todd Rohal, his bumbling-along cringe comedy and that harsh swerve into WTF territory. Killer soundtrack to boot. Earlier: Reviews from Sundance.

Roundups on films I've not seen at SXSW are on the way. Meantime, for news and tips throughout the day every day, follow The Daily Notebook on Twitter and/or the RSS feed.