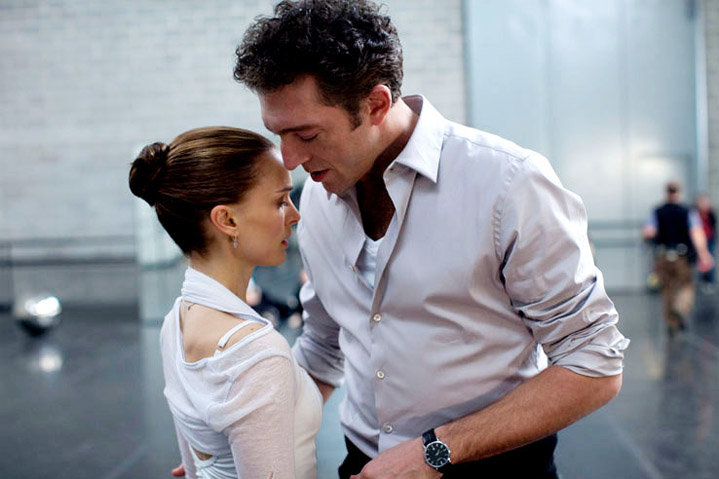 Darren Aronofsky: a resourceful technician (Pi) of considerable range but little imagination (Requiem for a Dream), after attempting an artwork of his own (The Fountain), resigns himself to a career fixated on art, but capable only of chronicling it (The Wrestler, Black Swan).

Aronofsky's two most recent films are essentially the same movie—a drama about a second-rate artist with family problems, haunted by (the reality of / possibility of) aging, who pushes him or herself to suicidal limits, done with a tinge of body horror and closing with a performance—and I get the sense that it's the movie Aronofsky will make for years to come (which is no problem: both films are pretty good, with the second one being a bit more consistent than the first). Obsessed by darkness but lacking an inner darkness of his own, he has gazed deep within himself, tried his best tragic artist / egoist routine (in The Fountain, a film that is paradoxically both artless andarty) and found little aside from an intelligence for special effects and a film student's knack for imitation and transposition. Aronofsky's direction gives the impression that he's the only man who has ever lost sleep over being able to sleep well at night; he wants badly to be psychotic or tormented and in his films creates a fantasy of psychosis (at its most morally questionable in Requiem for a Dream).

In Black Swan, the comparison-minded have already found Polanski, Lynch (?), All About Eve and its variations, and Cronenberg (close but no cigar—D.A.'s handheld razzmatazz precludes the comparison; Cronenberg's visual autopsies require steadiness and evenness, so it's no surprise that he almost never shoots handheld and insists on using the same lens on every shot of a film). But the most apt point of comparison—or, more accurately, contrast—is Jacques Rivette at his most paranoid. There are affinities: the handheld 16mm camera (in Rivette's case a budgetary necessity, in Aronofsky's an aesthetic caprice), the emphasis on theatrical rehearsal and company dynamics (the script for Black Swan, originally titled The Understudy, was about the theater; the ballet was Aronofsky's idea), the interplay between text (Swan Lake) and action (the plot). But what separates an artist who aspires only to be a proper technician of the cinema (Rivette) from a good cinematic technician who wants only to be an artist (Aronofsky) is depth.

Black Swan is a machine, though a very entertaining one. All of Aronofsky's films are machines that exist to execute a looped theme; they are—to bring to mind an object returned to again and again in Black Swan—music boxes. Ambiguity is manufactured, Christopher Nolan-style, through precise formal control (see: the film's metaphorical color scheme, which extends from Mila Kunis and Natalie Portman's wardrobe to the paint in the hallway of Portman's apartment). In comparison, Rivette's improvisatory chaos, with its clashing acting styles and degrees of realism, forms fractal conspiracies: stare firmly enough into Out 1 or The Gang of Four and you'll find more ambiguities and contradictions as—and this is essential to his peculiar paranoia—the more one grasps the grand scheme of things, they less they seem to be the product of design. In Black Swan, all you'll see is that even the tissue Portman wipes her eyes at the gala is—like the stage set, the costumes, the rehearsal room, and Portman's own apartment building—neatly patterned black-and-white.