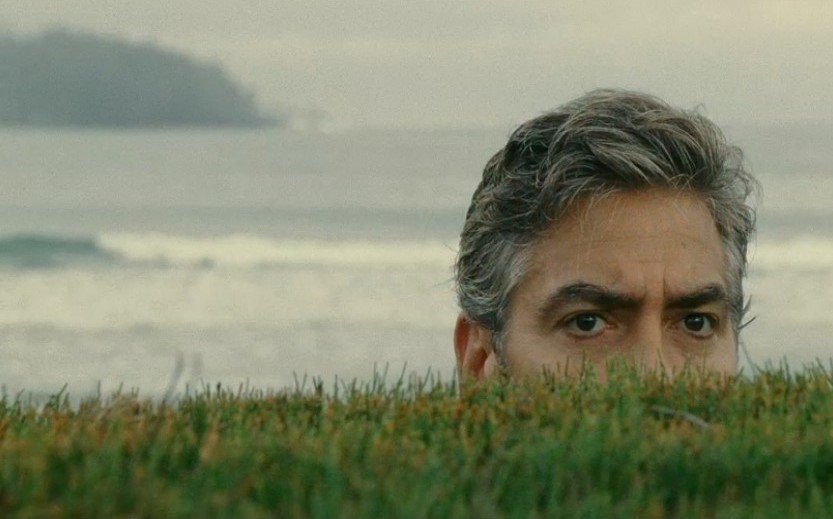 "After a five-year wait since Sideways, Alexander Payne has made his best film yet with The Descendants," announces Todd McCarthy in the Hollywood Reporter. "Ostensibly a study of loss and coping with a tragic situation, this wonderfully nuanced look at a father and two daughters dealing with the imminent death of his wife and their mother turns the miraculous trick of possibly being even funnier than it is moving…. Payne has always impressed with his talent for injecting his studies of flawed ordinary people with unexpected warmth and comedy, but never has his knack for mixing moods and modulating subtle emotions been more evident than in this adaptation of Kaui Hart Hemmings's 2007 novel."

"The Descendants is set in Hawaii," notes John Horn in the Los Angeles Times, "where [Matt King, played by George Clooney] is the sole trustee of a 25,000-acre parcel held in a family trust since the 1860s. King's relatives want him to cash out for untold millions and yield to developers, but King has more pressing problems. With his wife, Elizabeth, [in a coma and] unlikely ever to regain consciousness, King has to figure out how to care for his two daughters. Ten-year-old Scottie (Amara Miller) is despondent over her mother's condition, while 17-year-old Alexandra (Shailene Woodley) is rebelling through alcohol, drugs and promiscuity. 'I'm the backup parent, the understudy,' King says in a voiceover. All of a sudden, he's onstage and doesn't know any of the lines."

Peter Debruge in Variety: "With its tropical vistas and near-perfect weather, Hawaii makes an unexpected backdrop for such a story, a mismatch that island native Matt King acknowledges in his opening voiceover. 'Paradise can go fuck itself,' he says… Though Payne undoubtedly ranks among the leading portraitists of American cinema, his earlier films display a semi-condescending, even judgmental attitude toward his characters. Here, the individuals are every bit as flawed, and yet the tone is refreshingly open-minded, allowing observant auds to draw their own conclusions."

"Payne's film rests on whether he can coax a nuanced performance from a strong male lead who is capable of accessing intense vulnerability," notes Michael Patterson at the Playlist. "In About Schmidt (2002) he found what he needed in Jack Nicholson's Oscar-nominated turn and two years later in Sideways (for which he shared the Oscar for Best Screenplay with Jim Taylor) he scored a double whammy with Paul Giamatti and the also Oscar-nominated Thomas Haden Church. For the central male protagonist of The Descendants, Payne turned to George Clooney and in the course of the Q&A that followed the screening he insisted that Clooney had provided him with the best acting collaboration of any of his films. Can the performance possibly live up to that? Actually, yes."

"Clooney didn't fully impress me as much as he did in Up in the Air," counters FirstShowing's Alex Billington, while, In Contention's Kristopher Tapley (who has video from the Q&A) finds the film "to be a bit Payne-lite."

Update, 9/4: For the New York Times' AO Scott, Woodley's performance is "one of the most insightful and unaffected depictions of a real American teenager in recent memory."﻿

Updates, 9/9: "Looks like Alexander Payne is over being glib," writes John Semley in Cinema Scope. "Maybe he's outgrown it? Whatever the case, The Descendants may be his best film since Election, if only because it evinces a confidence to dabble in emotion and sentiment without pulling back into the stilted, familiar territory of Payne's Middle-American satirizing."

"It's far from the electric bite of 2002's About Schmidt or 1999's Election's yelps against authority," writes the Guardian's Catherine Shoard. "Rather, it's a primer on passivity: when not to act, how to give in — to grief, or abuse, or betrayal."﻿

Update, 9/10: "The Descendants is an ultra-polished picture in which every emotion we're supposed to feel has been cued up well in advance," writes Movieline's Stephanie Zacharek. "There's nothing surprising or affecting about it, and not even Clooney, who works wonders with the occasional piece of dialogue, can save it." He's "trying hard to be believable, to be real, but he's undone at every turn by the self-assured calculation of the film around him."﻿

Updates, 9/11: "I never thought I'd see the day when I'd be more impressed with the visuals in an Alexander Payne film than in the writing or acting, but that's exactly where I am with The Descendants, a muddled family drama that thrives primarily because of Payne's staging." Noel Murray at the AV Club: "There's a shameless crowd-pleasing element to The Descendants that holds it back from the truths about family relationship that it's trying so hard to reach. Still, Clooney's movielong journey from cousin-to-cousin and friend-to-friend — to deliver the news about his wife and to learn more about what she was up to before her accident — keeps the locations and tone shifting often enough to keep the story compelling, and the Hawaiian setting gives The Descendants a distinctive flavor that survives Payne's efforts to bury it in schmalz."

For Screen's Mike Goodridge, The Descendants "confirms [Payne] as the finest chronicler of human foibles working in US movies. Both hilariously funny and heartbreakingly sad, it's a beautifully observed movie… George Clooney gives his best performance to date."﻿

Update, 9/12: "Because it's Payne, a director both derided and acclaimed for surrounding his sad, seemingly hopeless characters with a deviant sense of humor, The Descendants constantly hovers on the brink of a dark comedy." IndieWIRE's Eric Kohn: "By treading carefully, Payne has created his warmest, most earnest work, if not his best."﻿

Update, 9/14: The AV Club's Scott Tobias gives The Descendants a B: "Bonus points for casting Robert Forster, who hasn't gotten quite the career boost he deserved post-Jackie Brown, and for giving Judy Greer a role of more depth and humanity than she's generally allotted."﻿

Update, 9/18: "Of course Matt will let his angry father-in-law, mourning a 'faithful wife,' stand uncorrected," sighs Time Out New York's Joshua Rothkopf. "Of course the doofusy boyfriend will turn out to be more substantial than he appears. The movie does has a loveliness to it, via the locations and its regionally motivated ukelele music. But this is all too safe from a director I turn to for difficult insights."﻿

﻿After its showing at Telluride, The Descendants will be a Special Presentation in Toronto. Then, it's off to New York before opening in the US on November 23. For news and tips throughout the day every day, follow @thedailyMUBI on Twitter and/or the RSS feed.﻿