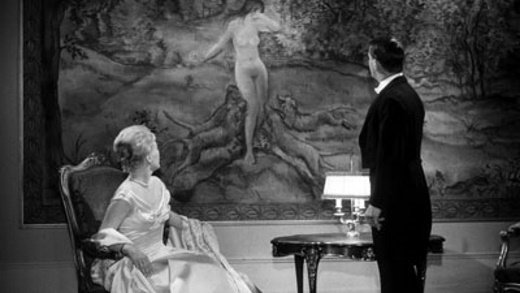 Final paintings, final books, and final films are often read into because of their terminating chronology. Did the artist know they were close to death? How is that shown in the art? When he died in 1968, Carl Dreyer had many projects lined up, including Medea and Jesus of Nazareth, which he had been preparing and researching for years, to the point of learning Hebrew. His last films, Ordet in 1955 and Gertrud in 1964, embody the exacting visual style he forged during his fifty-five-year career—a style he explicated in short essays written ten and twenty years before Gertrud. Being a director who worked with and without sound, we should trust Dreyer when he says film “first and foremost directs itself to the eye, and that the picture far, far more easily than the spoken word penetrates deeply into a spectator’s consciousness.”1 Gerturd is as much about the eponymous character's face and all the freeing or cramped emotions it contains as her words in script. Because the art is so realized, it prohibits any “reading into” its creator's consciousness—Dreyer's films, especially, the last two, were his consciousness. Every answer is onscreen.

Dreyer’s allegiance to the visual began with his early features in the twenties, including The Parson’s Widow (1920) and the first Kammerspiel (chamber drama) film Mikaël (1924). He summarized ﻿the science behind presenting images of a pleasing nature in the essay “A Little on Film Style” thus:

The eye absorbs horizontal lines rapidly and easily but repels vertical lines. The eye is involuntarily attracted by objects in motion but remains passive over stationary things. This is the explanation why the eye, with pleasure, follows gliding camera movements, preferably when they are soft and rhythmic.2

Recalling the quixotic terrain of Falconetti’s unadulterated face in La passion de Jeanne d’Arc, Dreyer’s further words on performance don’t surprise: “We can often read a person's whole character in a single expression, wrinkling of the forehead or blink of the eye. Mime is the original means of expression of inner experience—older than the spoken word.”3

Though after Jeanne d’Arc he was to make only five features in the last forty years of his life, including the disowned Two People (1945), Dreyer continually refined his methods. Due to lack of funding he sat on his work like a mother hen. Henning Bendtsen, cinematographer on his last two features, recalled that everything, every camera shot and movement, was planned, but at the beginning of each shooting day Dreyer scrapped these ideas and proceeded anew, using  all the preparation as a basis to reinterpret the way his art would look. He knew the lives of the characters as if they were his children, once taking his lead actress in Ordet to buy stockings at a clothing store, though the stockings are never seen. The same obsessiveness and constant working one hears about Bergman, Kubrick, and Tarkovsky is evident in Dreyer, who called actors in the middle of the night with ideas. Where did all that preparation lead? In an interview he said of Gertrud, “In three days, the editing was completed…I thus realized a progress, for Ordet was edited in five days and Day of Wrath in twelve.”4

In Gertrud (based on a 1906 play by Hjalmar Söderberg), a woman makes to divorce her husband (Gustav, a politician) when she falls for a much younger man (Erland, a pianist), while at the same time an old lover (Gabriel, a poet) is visiting. After she finds out Erland has lied and bragged of his conquest of her at a party Gabriel attends—the poet still yearns after Gertrud—she leaves him, as she does the other two, for a life of exile. Even with the amount of verbiage in the film, the primary means of its art are the non-verbal elements of the mise-en-scene, including the faces of the actors and the décor of the sets, including paintings, sculpture, furniture, and the enigmatic tapestry which Gertrud says replicates a nightmare she had.

While words are important, Dreyer’s belief was that “the great dramas were played quietly”5 and, “What I seek in my films what I want to obtain, is a penetration to my actor’s profound thoughts by means of their most subtle expressions.”6 How he fulfilled these tenets in his last three features was an about-face from the montage in Jeanne d’Arc—placid and glacial long takes. Owing to this ease, Gertrud contains only 89 shots in 111 minutes, with its longest being nearly ten minutes, as well as a host of four and five minute takes. These scenes contain the relatively stationary bodies of the characters sitting and standing, flummoxed by emotions that seem to only saturate them from the neck up.

The long takes in Ordet and especially in Gertrud are meditations on the human face—explorations of the emotions that create creases on our fronts, whether of ill or gracious temper. Dreyer pulls off a tragedy without spilling blood, even without physical violence, as was his wont in his other celebrated films. Gertrud’s form is a perfect complement to its wrenching narrative, as the presentation of people who lead lives of quiet desperation in this slow style endows the viewer’s capacity to witness the implacable dynamics shaping their psychology.

Some people’s words lie and some have deceitful faces. Characters in Gertrud display at least one of these symptoms, while Gertrud and Erland flirt with both, explaining their attraction despite the age gap. Waves of emotion cripple Gertrud at times. When she finds out Erland has lied, doesn’t love her, and has had a child by another woman, she is stunned. 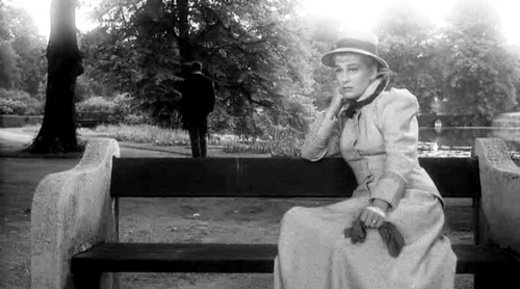 True, many shades of anguish pepper most of the faces of Gertrud (and the three men), but surprise, joy, desire, satisfaction, and duplicity mark her as well. Dreyer’s portrait of a woman affronting her fate ranges a gamut of faces, though the story only takes a little over two days. 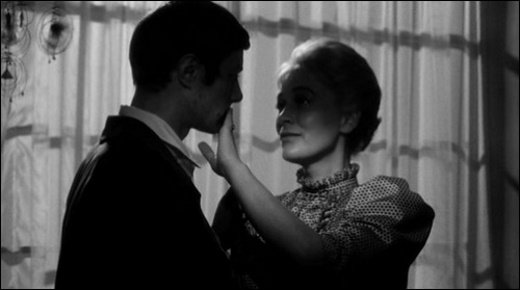 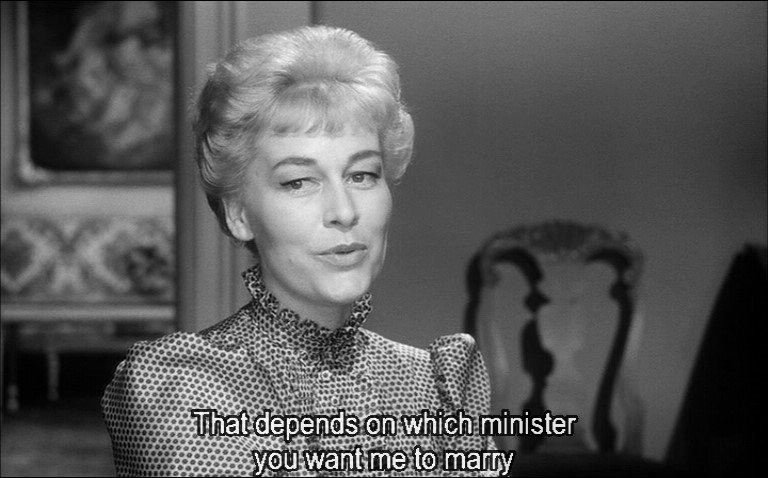 Duplicity with her husband 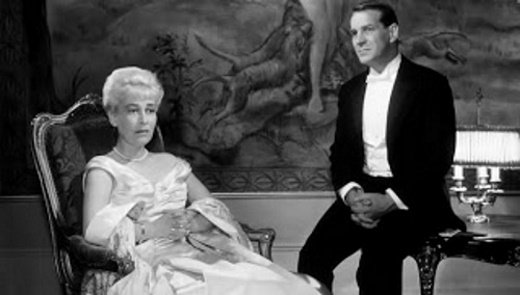 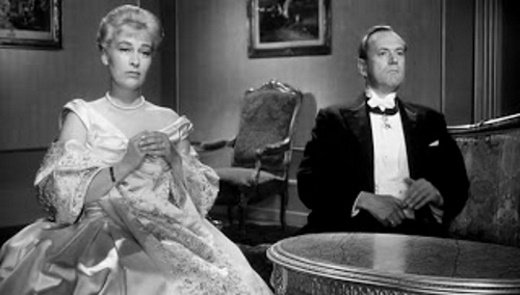 In one of the final scenes, Gabriel pleads with Gertrud in her drawing room to come back to him while her husband is away. It is a sequence of sixteen minutes accomplished in six shots, introduced by her image being reflected in a mirror to alert Gabriel of her presence. Then Gertrud sits and looks toward the camera but beyond it, into a quizzical distance, as Gabriel places himself behind her on a higher seat just behind, his head aimed in another direction, so they are conjoined, plastered together as a human sculpture recalling Michelangelo’s final work, the Rondanini Pietà. 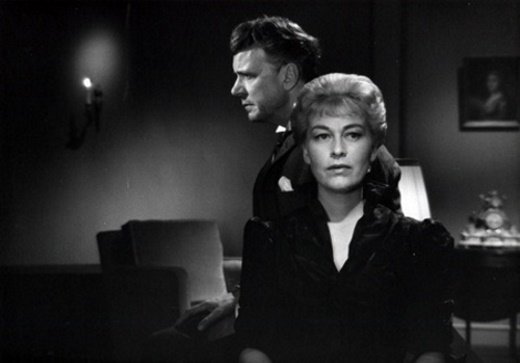 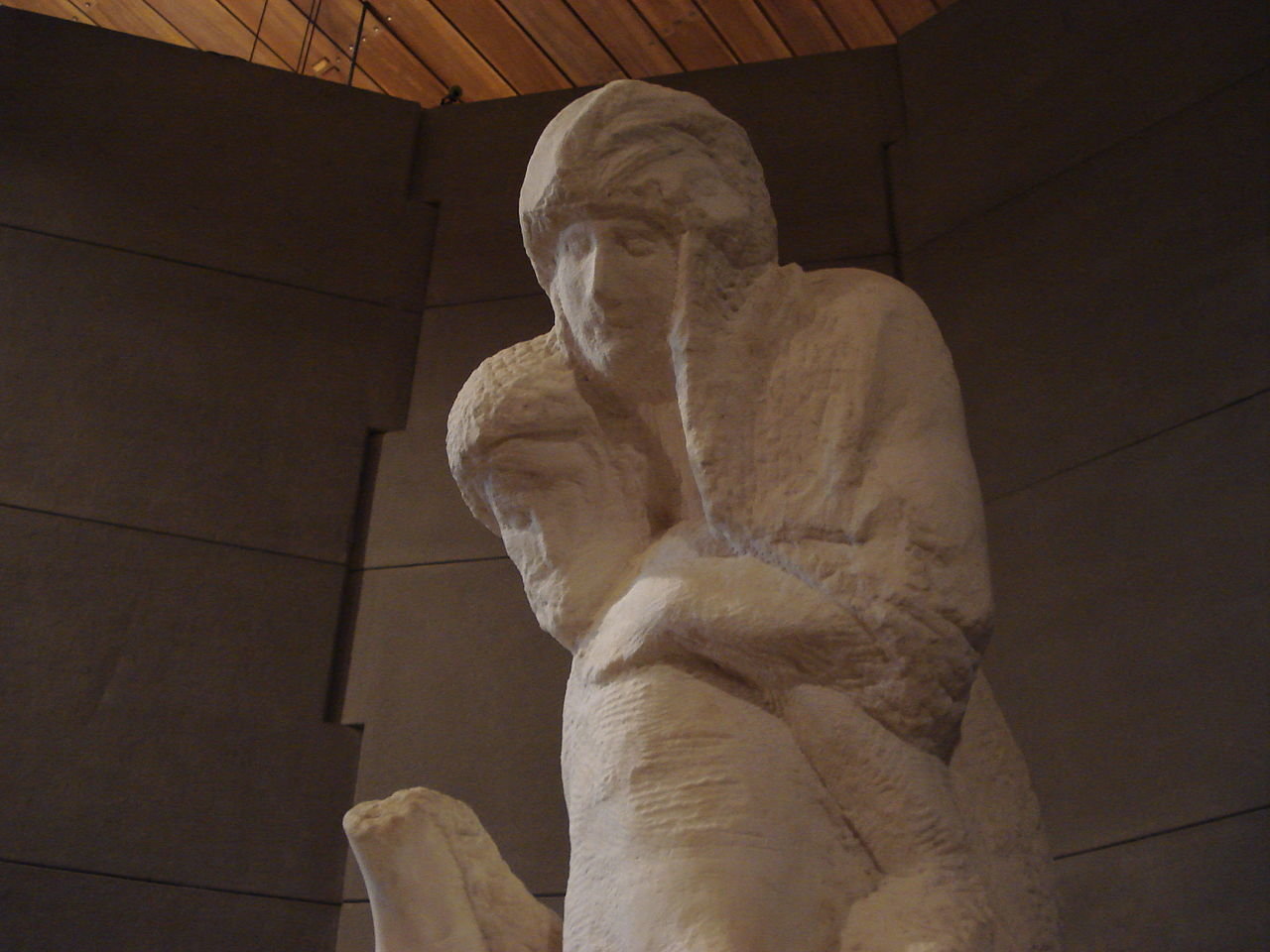 These two souls, once so similar in their physical cravings, are melded for one last time creating one creature—a wild gorgon, an afterbirth of their disjunctive emotional squalor. Their heads inch one way or the other but the viewer only gets the full facial of the spirit (Gertrud) who feels more of their true future and who has the will to remove herself and not return to the trap and trick of a dead relationship. Her face flourishes and flouts (does it color?) and the viewer sees her seeing their past joys and sorrows projected through her mind, displayed on her crinkled visage. In the beginning of this three-minute take her head is inclined toward his as she concurs with Gabriel, echoing him, “Nothing’s ever like one thinks.” Then her face tightens and straightens when she tries to answer if she ever loved her husband. When she brings up Gabriel’s poetic creed, “I believe in the pleasure of the flesh and the irreparable loneliness of the soul,” she inclines toward him again, softening her features before anger and regret ice them over. Talk of the recently departed Erland brings sadness, though finally she stands and holds Gabriel’s cheeks, a fitting motherly caesura to a onetime communion turned immature. Later in the sequence, they will stand in front of Edvard Munch’s Two People, The Lonely Ones—a woodcut showing an isolated man and woman with their backs turned. Spare camera movements, no cutting, no reaction shots—Dreyer would have said the audience provides its own. The simplicity of this style of cinema, typifies, as Andrew Sarris said of Dreyer and the film, someone “who has lived long enough to know that you live only once and that all decisions are paid in full to eternity.”7

For Dreyer, architecture was film’s sister art, with director as architect. In another essay from 1955, called “Imagination and Color,” he says, “Art shall represent the inner and not the outer life,” and that only by abstraction, which is “an expression for the perception of art which demands that an artist shall abstract from reality in order to reinforce its spiritual content,” will any artistic renewal of film be possible. Abstraction “allow[s] the director to replace objective reality with his own subjective perceptions.”8 It is the abstractions that audiences of Gertrud have responded to since its premiere in Paris (December 18, 1964) where it was received extremely negatively by the press. Though the film has taken a while to be feted (it is listed as the 43rd greatest film in the recent Sight and Sound poll), some critics have made plain their contempt for the central character, seeing her as a cold figure emitting frosty, self-involved pronouncements like, “I choose my husbands,” “I want complete love,” “I love you but you don’t love me. I no longer want you,” and “The man I choose to live with must belong to me completely.” What makes these appeals so threatening is how naked they are, but they are true human sentiments—microcosms of the long laundry lists of desires one sees in Internet dating profiles, e.g. I want someone who will love me for who I am. As an orphan who hated his adoptive mother and sought out his real mother only to discover she had died when she tried to abort a child, Dreyer’s life was no doubt harrowing. When the audience sees two people talking together but not looking at each other (as often happens Gertrud and Ordet), there is instant disenchantment, but also instant intrigue. As we see the characters’ faces more fully, we also find how they treat each other. In being interminable monuments to despair, Dreyer’s films register many reverberations. Dreyer packs his sets with art and mirrors to reflect the already reflected life we see, until finally in Gertrud’s modest Paris home her empty walls are symbolic of a hermitage or convent. She looks to nothing for fulfillment except herself.

How many times is the word “love” uttered in Day of Wrath (1943), Ordet and Gertrud? Many, more than many—it is voiced so much one can’t look away, because when love is the overt subject of art (we should assume it is always the implicit subject) we know the artist is not afraid and certainly not afraid to fail because he or she is interested in what everyone has to be interested in even if the paying public isn’t—that lonely, majestic syllable. “Gertrud is a film I made with my heart,”9 he said.

Great art doesn’t apply to our prejudices, it presents as emotion itself. Because Dreyer made a film that is love, viewers are invited to throw all their questions, hopes, and desires at it. “Is love this?” one may ask and then ten years later, one can come back to Gertrud and ask again. How convinced are we that Gertrud knows what love is? And us? Do we know? Dreyer doesn’t let a character’s choices guide us—they may enlighten, but they aren’t didactic. The architecture of the film is already fully invested in that.