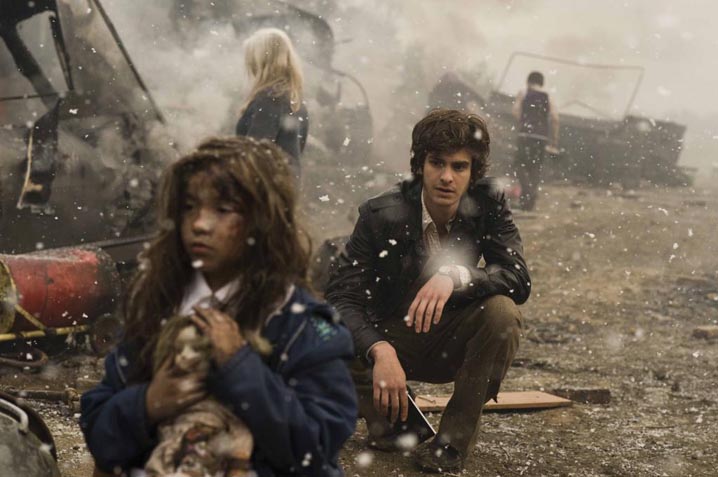 Back in March, the UK's Channel 4 broadcast a three-part series based on four books by David Peace known as the Red Riding Quartet. In May, IFC Films picked up the US rights to this Red Riding Trilogy and, as Anthony Kaufman notes, it'll be screened at the New York Film Festival (but not Toronto). Yesterday, the first part kicked off the Telluride Film Festival.

Variety's Todd McCarthy finds it "a compelling, disturbing crime drama that leapfrogs through a decade's worth of corruption and venality, leaving everyone in its vicinity permanently soiled or six feet under.... The novels and films are a mix of fact and fiction centered around the disappearances of several young girls and the crimes of the actual Yorkshire Ripper, Peter Sutcliffe, who killed 13 women from 1975-80 while eluding police. (Sutcliffe could, astonishingly, be released from prison two years from now.) The films, entitled 1974 [directed by Julian Jarrold], 1980 [James Marsh] and 1983 [Anand Tucker] (Peace's other book was 1977), reverberate significantly with one another, and are not designed to be stand-alone pictures, although the middle one could almost manage as a solo item."

"This noirish tale never lets up as it digs darker and deeper and nastier than you'd ever expect," writes Anne Thompson, while Jay A Fernandez was "shot-gunned to our seat by the film's grim view of the snaking corruption in a small West Yorkshire town. It's as good as anything currently in American theaters."

Peace, who struggled for years to get anything published at all, is also the author of The Damned Utd, adapted by screenwriter Peter Morgan and director Tom Hooper, and he's currently working on the final part of a trilogy set in Tokyo that sounds awfully intriguing.

"The television adaptations of Red Riding have attracted some of British television's most achingly hip talent," noted the Telegraph in March (following up on another profile of Peace two weeks earlier). Andrew Garfield, Maxine Peake, David Morrissey, Paddy Considine and Rebecca Hall, for starters. Benji Wilson: "Actors follow scripts, however, and it was [Tony] Grisoni's adaptations that provided the lure." Sight & Sound editor Nick James spoke with Grisoni, too, while back in the Telegraph, Amy Raphael interviewed Sean Bean, who plays "the destructive, Machiavellian businessman John Dawson."

"Each part of the trilogy is a startlingly original piece of work," writes Gerard Gilbert, who also spoke with Grisoni for the Independent: "Throughout the development of these scripts, we were haunted by reality that seemed to mirror the fiction: Stephen Lawrence, Madeleine McCann, Natascha Kampusch, Shannon Matthews, Josef Fritzl, the Yorkshire Ripper hoaxer... Sometimes, it was difficult to tell the real world from the dark fictions we were weaving."

Update, 9/6: "Although made for television, all three installments work on a very cinematic level and will reward viewers who don't flinch easily and who can keep their eyes on the ball." At Movie Morlocks, keelsetter briefly reviews all three parts.

Update, 9/7: "Jarrold's film helps to elevate the trilogy's worth considerably," writes Kristopher Tapley at In Contention. "But it really is downhill (though not exactly a steep drop-off) from there."

Update, 9/8: For Eugene Novikov, writing for Cinematical, Red Riding is "the greatest thing I've seen since I discovered the first season of Twin Peaks on DVD."

Update, 9/27: Nick Schager in Slant: "Reminiscent of The Wire and Bong Joon-Ho's Memories of Murder in its serpentine inquiry of corrupt institutional structures, and also of Zodiac in its crime-procedural data overload, The Red Riding Trilogy... proves that HBO has no monopoly on quality small-screen drama."