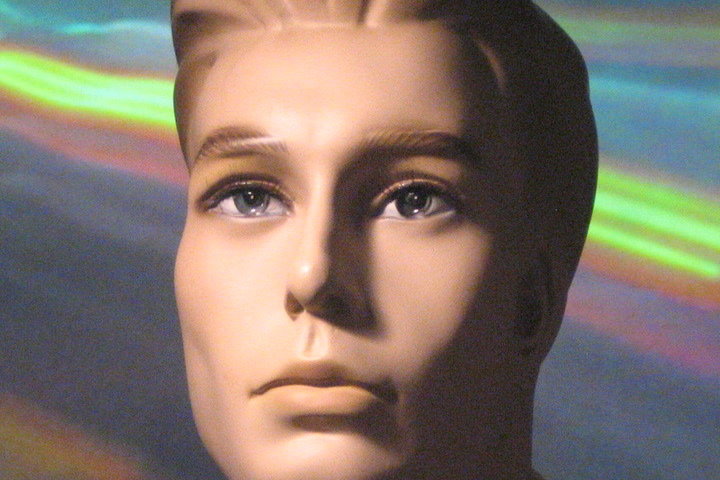 When watching Scott Stark’s wonderful new film The Realist, my mind unexpectedly shot back to a 1977 work by Peter Kubelka. Although it’s strange to think of a minor Kubelka film, especially in a career characterized by such parsimony of expression, not that much has been written about Pause!, partly because it is so notably different from the heavily edited, “high articulation” films on which Kubelka built his reputation. Pause!, by contrast, consists of uninterrupted camera rolls of Kubelka’s fellow Austrian avant-gardist Arnulf Rainer, as he contorts his face and body, struggling to maintain his balance. As one watches Pause!, it becomes apparent that the limitations of Rainer’s body are setting the parameters of Kubelka’s shots. In fact, although we cannot be exactly certain of this, it appears that Rainer is taking a breath at the start of each shot, and that Kubelka’s shot lasts until Rainer collapses under the necessity of resuming respiration.

So what does this mean? Pause! is much more than a document of a performer; if it were that alone, it would probably fit more easily into Kubelka’s filmography, even if only as a kind of one-off. What the film actually displays is a kind of expanded variation on Kubelka’s earlier method. In those previous films, the frame, and not the shot, is the basic unit of cinematic understanding. Pause! rather unnaturally elaborates the idea of a “frame,” into a shot, or into a passage of frozen human Being. To wit: the frame is a section of existence removed from the flow of life, and typically cinema reanimates this dead husk through multiplication (“weak articulation”), so as to resemble natural motion, life instead of death. But as we learned from even André Bazin, proponent of the long take and therefore King of the Weak Articulation, cinema is “death at work.” Celluloid is a form of taxidermy, and the figures onscreen are as (re)animated as Frankenstein, Bugs Bunny, or any number of French corpses ambling out of the factory or disembarking from the train at La Ciotat. The extended passages of Rainer in Pause!, then, are demonstrations of this taxidermy, operating at the other side of the screen, as the subject in the celluloid struggles to keep the breath of life in until the work of the camera inevitably draws it out, subjecting it to the destructive ravages of time. Pause! is a “realist” film. It makes film’s hermetic vacuum its uncomfortable topic.

Thirty-six years later, Stark has arrived with The Realist, which turns Kubelka’s premise inside out. Instead of watching a live individual struggling to exist within film as a non-respiratory entity, we see the defiantly dead, plastic non-lives of shop window mannequins, vibrating and trembling through Stark’s video manipulation. Like several of Stark’s recent works—Speechless (2008), Bloom (2012), actually going back as far as 2001’s Angel Beach—differential images alternate rapidly in phenakistoscope style, producing a kind of pseudo-motion in which the single framings retain their integrity as unique images. In the case of The Realist, Stark focuses on window-display set-ups or mannequin poses which, when juxtaposed in rapid succession, produce either movement or combination images: two sets of women’s legs “switch” tights, and seem to take a step; a golden ball shape “appears” between a pair of outstretched hands; heads shake as the camera pans down. Stark engages in the substitution of similar forms and, in so doing, turns replacement into a primitive animation. 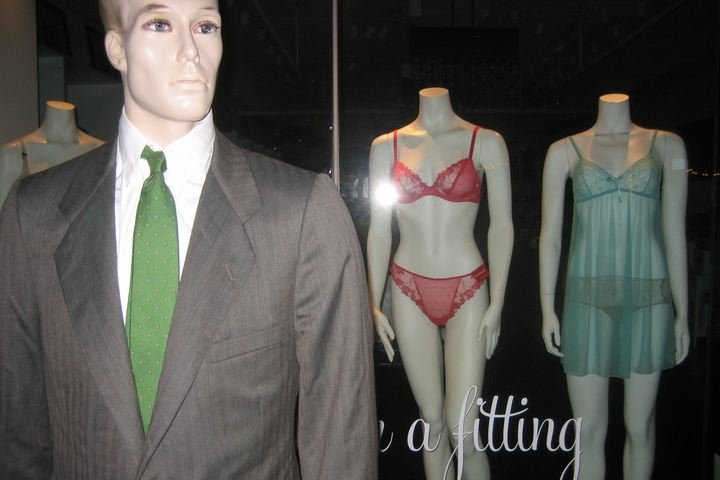 A great deal of the action in The Realist, however, consists in the “backgrounds,” although the compositions Stark employs to not really admit of this term in the strictest sense. That is, when Stark edits so as to oscillate between one mannequin and another, in a similar pose and wearing a suit that has a common shape but a different color, we see that the reflection off the window (“our” space) and the store background through the window (“their” space) is completely different. Not only does this activate the picture plane in ways we generally don’t expect. It also speaks to a deeper level of non-diegetic realism inherent in any cinematic production. Location matching, light differences, the shifting of reflections and environments across time, all of these elements are meticulously controlled when fictional features are produced. Scenes that are shot in the same space at different times are matched through formal illusionism, so as to disguise the anteriority between and among shots within a single scene. (The late Raúl Ruíz wrote, “a good viewer of the future will immediately recognize that between shot 24 and shot 25 Robert de Niro has had pasta for lunch, while between shot 123 and 124 he has clearly had chicken for supper.”) The Realist employs a “realism” well beyond anything Bazin might have advised, letting the construction of the process come forward in a manner that produces one coherence (moving bodies) at the expense of another (cyclotronic, Cubist space).

As The Realist unfolds, certain effects dominate, and their meanings, while not clear or direct, impress themselves upon our viewing as perceptual question marks. The mannequins show their vacuous faces more and more, becoming “characters” in the most basic sense. We are challenged (dared, really) to use them as some kind of point of identification, although the high-ticket fashionista outfits they sport are far more colorful and appealing than they are. This is vital, from the point of view of the retailers whose domain Stark has infiltrated. Macy's, Nordstrom, Lord & Taylor, whomever, would never want the dummies to outshine the clothes. However, through Stark’s manipulations, the mannequins command our attention. They shimmy, seduce; they seem to march in unison, as if preparing to mobilize in some sort of capitalist-couture guerrilla faction; they gaze as us like kitsch statuary. At the 11 ½ minute mark, we see an outstretched hand, opening and closing. What does “she” want? 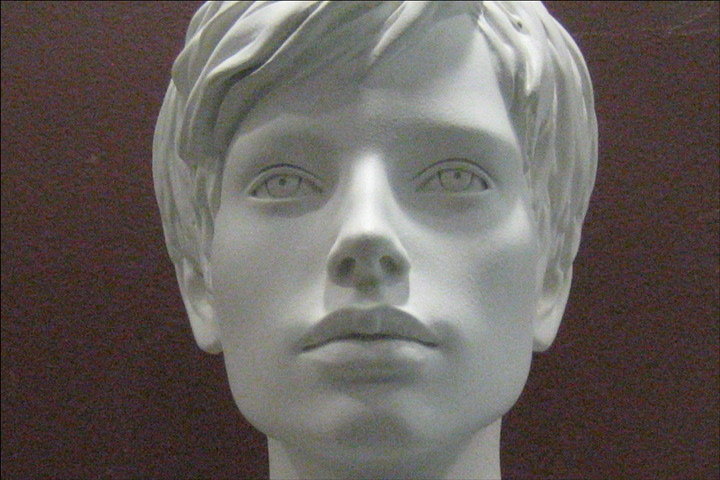 And then, in some intermediary passages of The Realist, the humanoids take a back seat altogether, as the products themselves take center stage. Displays of perfume, mixers and blenders gleaming in Macy's Cellar, and other zones of mall architecture are activated as well. (This is entirely plausible; these consumer goods and environments are as “alive” as the ostensible protagonists.) But mostly Stark zeroes in on the Hollow Men and Women, who are there to provide a kind of mirror of our consumerist non-thought. Would I look good in that? Does that come in another color? Hey, what’s that over there? Would the lines of that suit give me that sleek, powerful look that might get me that promotion? Are those plates bone china? What’s the thread count? (When Stark begins paying specific attention to a shiny red Kitchen Aid toaster, it’s clear he’s rhyming it with the perfect skin of his vaguely biomorphic subjects. If we automatically empathize with a human face on the silver screen, as film theorist Béla Balázs suggested, Stark offers a counter-theory. After all, the toaster is a warmer body than these legions of semi-walking Dead.)

Near the end of The Realist, Stark introduces a startling comparison. He both intercuts the mannequins with organic material (leaves, plant matter, images of trees), and also poses some disembodies hands and legs among the bushes, in a kind of nightmare of battlefield amputation. These figures are coming apart, and losing whatever claim they might’ve had to any surrogate life. Are they struggling? Is the film bearing witness to a pitiful attempt at a Christian miracle, or capitalism’s degraded version of the Golem? (Something even sadder, that is, than Mannequin 2: On the Run?) The dummies have left the store, entered the parking lot, but they have nowhere to go. It seems clear by this point that any conflict in our impulse to identify with the human figures is not just the product of Stark’s formal method. The crisis erupts because we recognize ourselves all too well in these empty clotheshorses and mall-dwellers. (Even the shopper-zombies in George A. Romero’s Dawn of the Dead could be said to have had souls to lose. What of us?)

This returns us to Pause!. If Kubelka achieved a form of realism by showing how cinema embalmed life, by taking the living figure and having him hold his breath to “become” the dying image of cinema’s anteriority, then Stark takes deadness (not death) and moves it around as if it were a display item, a kind of “imitation of life” that is activated only at the moment of projection. These non-human objects are as lifeless as the pixels that comprise their image, over and over again. Their Being is, and always has been, pure spectacle. And the trembling animatronic melodrama Stark has concocted for them is one that redoubles the all-too-human desire that prompts us to look at the screen in the first place. In the cinema, we want to look away from the threat of mortality by seeing life where there is none. And at the mall, we want to fill the emptiness inside us with everything money can buy. The Realist is a film about a universe so perverse that it can no longer keep its fetishes straight.﻿