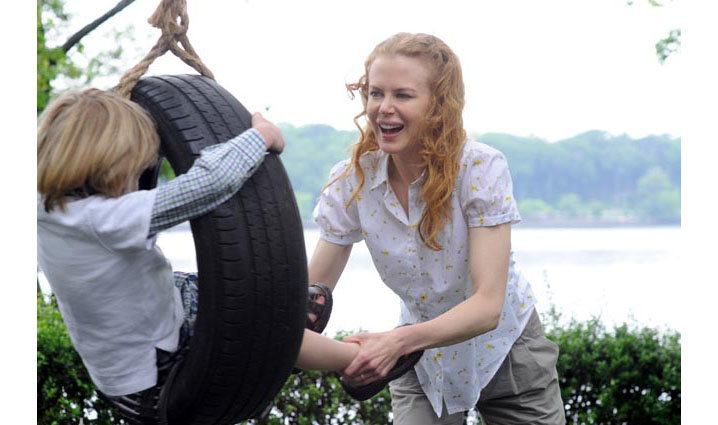 "[E]ssentially, what director John Cameron Mitchell has is powerhouse material — the story involves a couple coping with their child's death from a car accident — and two really fine actors, Nicole Kidman and Aaron Eckhart," blogs Ben Kenigsberg at Time Out Chicago. "All he does is stay out of their way: no more, no less. The results are wrenching at all the moments they intend to be, though you'd never identify it as the work of the man who made Hedwig and the Angry Inch and Shortbus."

"There's little doubt that it's based on a play, but that's not so much a criticism as a compliment," blogs Anthony Kaufman. "[T]he script has the well-worn depth of the theater and nearly all of the characters are richly drawn. I prefer the film's quieter moments to the emotional outbursts. The scenes in which Nicole Kidman and the boy who killed her son sit on a park bench and confront their collective sorrow are superb, among the best dramatic work I've seen since Life During Wartime."

The AV Club's Scott Tobias's "inner cold-blooded rationalist tells me that most of the choke-up moments were earned on the strength of across-the-board superb performances and a committed seriousness about grief and loss that largely avoids 21 Grams-type garment-rending."

"Eight months have passed since the accidental death of the Corbetts' 4-year-old son, Danny, and the New York couple, Howie (Eckhart) and Becca (Kidman), still feel their lives dominated by the loss," writes Peter Debruge in Variety. "With the larger canvas of the screen at his disposal, Lindsay-Abaire deepens several key relationships. An offhand mention of the God-freaks in group therapy becomes a full-blown subplot, as Becca rejects the collective sharing sessions, where participants appear to be competing for some sort of saddest-story prize." As for Kidman, "it's nice to see the actress's lately immovable forehead participating in her performance, with subtle, almost imperceptible fluctuations in her carefully guarded facade allowing us to follow as Becca tumbles down the rabbit hole of her own emotions. Eckhart gets a couple of big shouting scenes, but the actor manages to convey just as much in Howie's quietly injured moments."

"Rabbit Hole will win its share of accolades, but will it win audiences?" wonders the Hollywood Reporter's Kirk Honeycutt. "The small screen better accommodates this kind of concentrated tragedy; in a cinema, the story becomes like those support-group sessions the couple attends: The film does achieve moments of catharsis, but it can be heavy going."

Updates: Rabbit Hole "allows itself to be at once funny and heartbreaking without ever falling into the trap of oppressive heaviness that can so often befall such difficult subject matter," writes Tom Hall. "Mitchell's achievement, this delicate balance between gravity and levity, is a gift to the audience and a huge leap forward for Mitchell in terms of his maturity as a visual storyteller; close-ups and faces have replaced the medium shots of Hedwig and Shortbus and the young filmmaker's desire to bring energy to the music of Hedwig or the sexual frankness of Shortbus has been replaced by a faith in his actors to deliver the goods."

"Lionsgate has gone ahead and snatched up the North American distribution rights for the film and more importantly, plan to release it before the end of the year," reports the Playlist's Kevin Jagernauth.

Updates, 9/17: "Like a lot of movies about unhappy married people (Revolutionary Road comes to mind), it's self-consciously tasteful, which is the last thing I want from John Cameron Mitchell," blogs the Boston Globe's Wesley Morris. "Most scenes are bathed in acoustic guitars and strings. The photography is as pristine as the movie's expensive West Chester homes.... The movie's best, freshest instincts are comedic. The sarcasm, put-downs, and slights of grief, the little madnesses of suffering, come to Mitchell and Lindsay-Abaire more naturally. Maybe to Kidman, too. Her acerbity is as subtle as a paper cut. Conversely, Eckhart, who gave the second-best performance in The Dark Knight, is finally a full-blown emotional actor now."

Cinematical's Scott Weinberg was initially reluctant to walk into this one. "I've been to more than 75 film festivals over the last ten years, so please believe me when I say that each one always offers a movie about 'a couple mourning the loss of a child.' Sundance, Tribeca, Toronto, all of them. I'm pretty sure it's a requirement, along with the melodramas about single moms, the Holocaust documentaries, and something weird from Gregg Araki." That said: "What I ended up watching is, quite simply, one of the best films I've ever seen at a festival.... Rabbit Hole is, as far as I can tell, pretty much flawless."

"Rabbit Hole feels more like the adaptation of a really great play that hasn't been botched as opposed to it feeling like a really great movie, but that isn't to take away from what John Cameron Mitchell has achieved," writes Stephen Saito at IFC.com. The film "doesn't hinge on a revenge plot a la In the Bedroom or fall into the trap of turning into a shouting match between angry spouses, instead acknowledging the mystery of sorrow and letting Kidman and Eckhart play all its nuances as the process of letting go becomes a burden as great as losing a child in the first place. As a result, the drama may be less pronounced, but the emotions are no less complex, creating a film that's quietly devastating and elegant in its understatement."

Update, 9/20: Mary Corliss for Time: "This is no Lifetime Channel weepie; it is an evocation of coping that is deeply, complexly, heartbreakingly human."