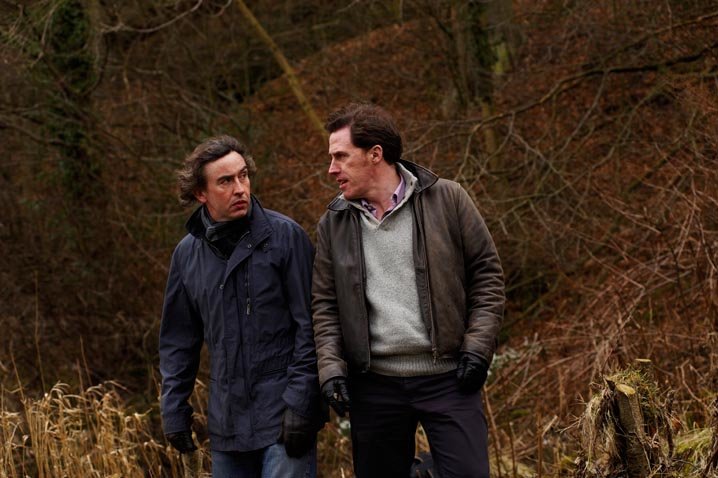 "I found myself completely charmed, and in the end quite moved, by Michael Winterbottom's The Trip, a freewheeling riff of a movie in which Steve Coogan and Rob Brydon (who appeared together in Winterbottom's marvelously out-there 2005 Tristram Shandy: A Cock and Bull Story) play semi-fictional versions of themselves, two friends taking a food-junket trip through the Northlands," writes Movieline's Stephanie Zacharek.

"Seemingly edited out of a mountain of footage for a BBC show and spending roughly a third of its running time on dueling vocal impressions of Michael Caine," writes Fernando F Croce at the House Next Door, "this wispy but funny and strangely affecting picture helps air out the stink from Winterbottom's previous The Killer Inside Me and, in its wry pricking of supercilious egos, suggests a more self-aware version of Sideways."

Karina Longworth for the Voice: "It's a pleasure to watch Brydon and Coogan egg and riff, and more than anything this works as a glimpse inside comedy as a process — which means it's repetitive and uneven."

"The flick is little more than a British road version of My Dinner With André," concedes Scott Weinberg at the newly redesigned Cinematical, "but there's also a small dash of poignancy in the duo's trek. Coogan, for example, is perpetually stressed about 'hitting it big' in America, while Brydon is rather content with this UK successes and his sweet little family at home."

"Coogan and Brydon have been playing these versions of them selves as far back as 2002's TV movie Cruise of the Gods, so it kind of gets tiresome quickly," finds James McNally. "Yes, yes, Coogan is more famous and lives a jet-set life. Brydon has everyman charm." And yet: "Almost every moment between them is hil arious, which in the end shows how strong their bond is, even when they're uncom fortable sharing their feel ings about each other."

Noel Murray "liked spending time with these guys, and I loved The Trip's well-earned poignancy as their journey comes to an end. But this is basically a good rough draft for a potentially great movie." His AV Club colleague, Scott Tobias agrees: "The Trip needs shape, and I suspect that if Winterbottom weren't rushing off to the next project, he might have spent a month or two finding the diamond in all that rough."