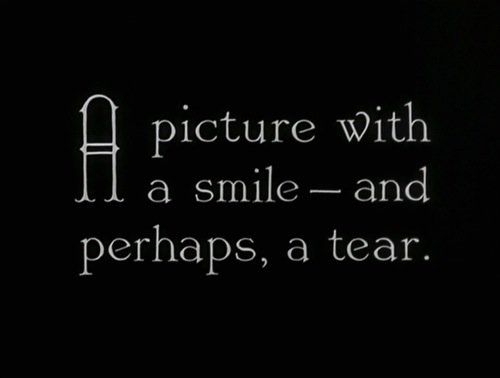 Of all the home video outfits doing business in the United States that have a continuing investment in repertory cinema, or, as a certain segment of the market might refer to such fare, "old movies," Warner Home Video has, overall I'd say, a pretty solid reputation. From VHS to laserdisc to DVD and now Blu-ray, the company has put out a lot of vital, spectacular fare in editions that, for the most part, offer the very best its given media can achieve. There have been exceptions, of course. And when they happen, the collecting community squawks particularly loudly, largely because of the reputation for care and quality the company has built. It's also a company that tends to learn from its mistakes. An over-processed restoration of Citizen Kane that came out a few years back is reportedly being corrected for a Blu-ray edition. Complaints about the use of old, near-obsolete masters for the Warner Archive DVD-on-demand collection is giving rise to a new batch of titles that are completely newly mastered. If you want a taste of Warner at its best in the Blu-ray domain, look at the company's recent releases in that format of North by Northwest, Gone With The Wind, The Wizard of Oz, and most recently, Doctor Zhivago (discussed here). It really doesn't get any better.

One of the most gross and conspicuous errors the company did commit in the DVD realm had to do with sins of omission rather than commission. In 2003, the company issued, as two box sets but also as individual titles, a series of Charles Chaplin films called "The Chaplin Collection." These discs were licensed from the French concern MK2 and used video masters made from what were mostly beautifully restored materials. The catch was that Warner did not do a proper PAL to NTSC conversion of those masters. They also created interlaced rather than progressive NTSC discs. Hence, the discs, while showing the awesome restoration work that had been done on the films, also had a lot of artifacts that shouldn't have been there: combing, for instance, in which you can actually see the two video "fields" that create a full video frame meshing with each other. Very distracting, particularly the better the display you are watching the disc on.

One good thing about high-def video is that it is its own international format. Yes, manufacturers can region-lock their discs to make them unplayable in certain territories, but that technology is entirely different from the technology that makes a PAL video unplayable on NTSC equipment. Those are two different broadcast standards, not compatible with each other. They have different frame rates, for instance, which is why if a certain process isn't applied during a PAL-to-NTSC transfer or vice versa, you'll get certain picture artifacts. On the other hand, a high-def encode is a high-def encode is a high-def encode the world over. Once you've got a good one, it can travel pretty much anywhere you want to send it.

Which means that Warner will have the chance to wave the Rod of Correction, such as it is, over its Chaplin error, if it wants to and if it gets the licensing rights. One thing's certain: someone in the State will pick up the licensing rights to the new Blu-ray Chaplins that M2K is licensing to various concerns across Europe. As someone lucky enough to have an all-region Blu-ray player, I decided a little while back to treat myself to a sneak preview of what these packages will offer, purchasing the great comic innovator's 1921 The Kid and 1940 The Great Dictator. 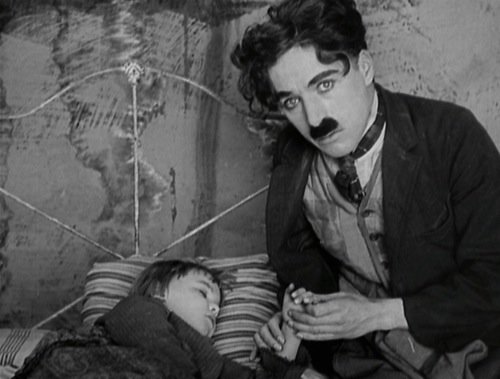 (I must have been kind of psychic, or something, because these two films are precisely the ones that are going to be available to this website's spectators in Ireland and the U.K. For those so fortunate, here are the links: The Kid and The Great Dictator) The packages, from the British Park Circus label, suggest we have quite a lot of wonderful stuff to look forward to as the domestic versions of these pictures come out. Both The Kid and Dictator packages here feature Blu-ray versions of the films and standard-definition versions of the films. These screen caps are from the standard definition discs, for which you can blame Steve Jobs, that creep. Very nice detail and gray scale, as you will, on films made 20 years apart. And boy, Chaplin really kept himself in fine trim over the course of those two decades. He is fifty in the shot below. 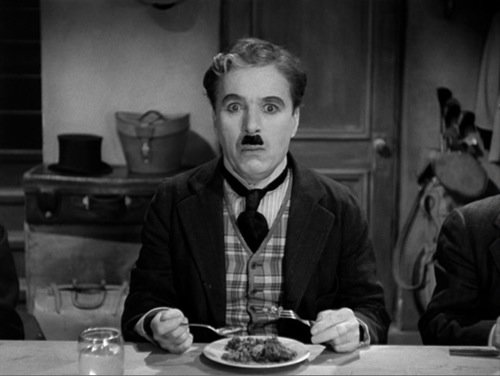 A DVD Beaver review of Dictator gives a lot of insight and history pertaining to this title on DVD; it's worth checking out in detail. As for the film itself, well, it's as problematic as it ever was. It doesn't make me nearly as apoplectic as it makes the historian, journalist and cultural critic Ron Rosenbaum, who's so venomous on the topic that you'd think that he considers Chaplin himself to have been a Nazi. "In any case, in my talk at the Harvard Film Archives, I began by tracing the origin of these tragic consequences to its comic source: the mustache," Rosenbaum wrote...and yes, while the actual politics of Dictator are extremely problematic and myopic, holding Chaplin to account for Hitler might seem to some to be...well, overreacting. Which isn't to say that Dictator isn't an inadvertently intriguing treatise on the iconography of celebrity and the ressentiment of one showbiz figure over another showbiz figure's lifting of his schtick, as it were. 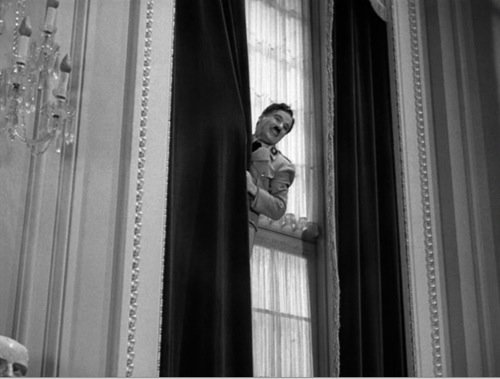 The Kid, on the other hand, is a much simpler and less vexed kettle of fish. It is Chaplin's first "feature," as it were, about an hour in length; a six-reeler rather than a two-reeler. Frankly, it plays rather like a short with padding, as witness the scene below from a dream sequence near the end of the film—a scene that distracts quite a bit from the film's central tear-jerking dramatic question, which is whether the Tramp will be able to continue to care for the film's titular abandoned child, played by five-year-old Jackie Coogan (who's completely adorable and gives no indication whatsoever that he's gonna grow up to be Uncle Fester, for heaven's sake). 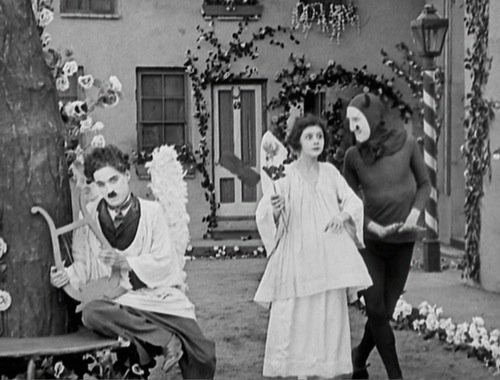 It brought up the question, in my mind, as to whether Chaplin—whose shorts continue to dazzle; I saw a program including The Rink, The Adventurer, The Immigrant, and Behind the Screen recently, and their energy and performance virtuosity, among other features, just blew me away—ever really made a proper feature film, other than City Lights. All of his films of longer duration—and many of them are, don't get me wrong, absolute masterpieces—have some quirks that make them not quite fit in with the standard of the times in which they were made. I'm not talking in terms that are necessarily answerable with an "well of course they don't; they're better;" although of course by and large the great ones are. No, it's something else. Something I'll be more prepared to discuss when I've looked at more of the new versions of the films, I daresay. (Which I may do on home video...or at the upcoming Chaplin retrospective at Film Forum.) Very much looking forward to it.