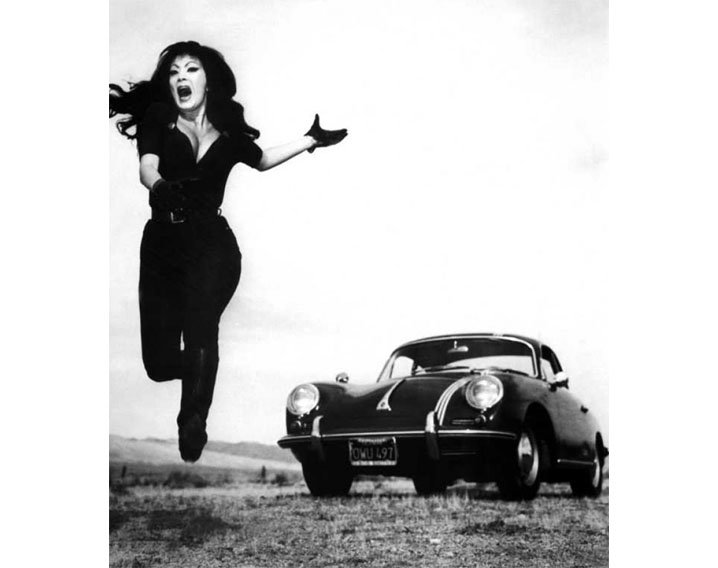 "Tura Satana, the actress whose authoritative presence, exotic looks and buxom frame commanded the attention of viewers of Russ Meyer's 1965 cult movie Faster, Pussycat! Kill! Kill!, died on Friday evening in Reno, Nev," reports Dave Itzkoff for the New York Times. "Born Tura Luna Pascual Yamaguchi in Hokkaido, Japan, to a father of Japanese and Filipino descent and a mother who was Cheyenne Indian and Scots-Irish, Ms Satana spent part of her childhood in the Manzanar internment camp near Independence, Calif, before her family settled in Chicago. Her Asian background and looks and the fact that she developed early led to frequent harassment and assaults, and she led an itinerant lifestyle, working as an exotic dancer and nude model. She even posed for erotic photographs taken by Harold Lloyd, the former silent comedian, who suggested she pursue an acting career."

Filmmaker's Scott Macaulay posts a couple of clips and points us to Shade Rupe's remembrance at Eric Kohn's place: "Tura earned her most visible role while performing in Irma La Douce. She got a call from her agent to come read for Russ Meyer. She didn't have time to change so she showed up in the wedding dress she was wearing for Irma La Douce. Russ handed her the script for 'Leather Girls,' the original title of Faster, Pussycat! Kill Kill! and asked how she would play her. Tura replied, 'I'd make her kind of feminine, but also a bitch on wheels.' After her cold reading Russ told her, 'You are definitely Varla.'"

Glenn Kenny quotes a passage from John Waters's book Shock Value (1981), "which, incidentally, I consider a masterpiece of American humor on a par with the work of Twain, Perelman, those kinds of guys." Waters recalls calling her cold for a "short but sweet" interview and being surprised to learn that she's a mother and a nurse, "and I try to imagine the buxom beauty in a nurse's outfit with a little badge saying 'Nurse Satana.' … Miss Satana's opinion of cult stardom might give pause to any aspiring actress of today — 'When the film came out, everybody who saw it wanted to punch me. I got a lot of letters from guys who wanted me to beat the crap out of them.'"

At Dangerous Minds, Paul Gallagher lays out the biography via a series of quotes from interviews and Marc Campbell posts more clips.

"Beyond Pussycat, Satana starred in cult classics like Astro Zombies and The Doll Squad," notes J Hurtado at Twitch. "She popped up now and again in video tributes to her classic work and the occasional voice over job. Mostly her fans would see her on the convention circuit, which she was happen to tour, being fawned over well into her 70s by men only a fraction of her age, and idolized by tough broads for over 40 years… Satana may be the ultimate Meyer girl. She only ever appeared in one of his films, fewer than Erica Gavin or Kitten Natividad, but no one embodied the Russ Meyer ideal like Tura Satana, and she'll forever be remembered for it."

Updates, 2/7: Lars Nilsen inducts Satana into the Badass Hall of Fame. More from Sean o"Neal at the AV Club: "Reportedly Elvis even proposed to her, but she turned him down."