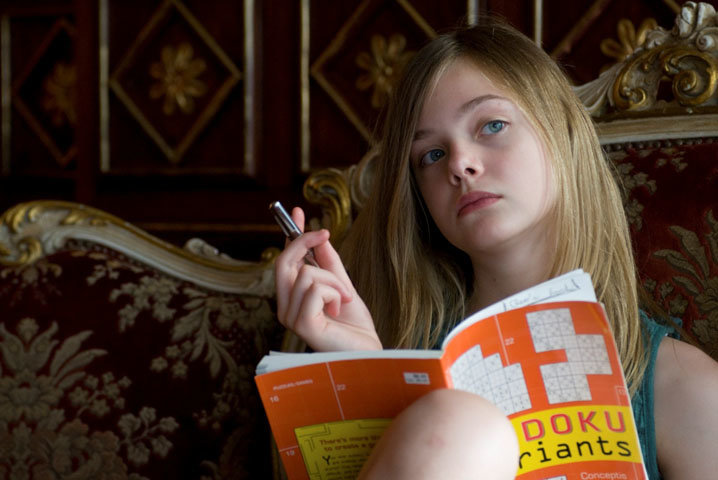 "With the wry, shimmery and thoroughly beguiling Somewhere, Coppola has perhaps made exactly the film she needed to at this point in her career: one that calmly takes stock of her abilities and interests rather than pushing them too severely." Guy Lodge at In Contention: "The director will, inevitably, take some flak for making a third consecutive film about the alienating side effects of celebrity and privilege — but as with Woody Allen and Upper East Side intelligentsia, or Mike Leigh and Britain's Tetley-swilling middle classes, this is world she knows and feels, and if she feels a responsibility to keep circling back to it in her work, then she should do so."

For Time Out London's David Jenkins, a "cloying sense of déjà vu radiates from Somewhere, Sofia Coppola's long-gestating follow-up to her divisive postmodern historical biopic Marie Antoinette (2006). That's not to dismiss the movie as a failure, it just forces viewers to make a judgement call as to whether her ongoing concerns regarding the alienation suffered by the pampered, beautiful elite (a world she obviously knows very well) coalesce into a satisfying body of work or whether she's simply making variations on the same movie. So lets chalk this one up as existing in that peculiar space between La Dolce Vita and Entourage."

But for Variety's Justin Chang, "Somewhere is a quiet heartbreaker. Trading Lost in Translation's [2003] Tokyo hotel for Beverly Hills' Chateau Marmont, the ever-perceptive writer-director further hones her gifts for ruefully funny observation and understated melancholy with this low-key portrait of a burned-out screen actor.... Film by film, she's building a fresh, distinctive body of work marked by an abiding fascination with the inner lives of celebrities — a desire to expose the ennui and alienation lurking behind so many tabloid personas and hold them up for pointed comic and dramatic inspection, something she does here with practiced ease."

Anne Thompson notes that "Italian journos at the morning press screening got a kick out of an amusing sequence when bored movie star Johnny Marco (well-played by Stephen Dorff) flies his willowy 11-year-old daughter Cleo (Elle Fanning) to a movie opening in Milan, where he orders them gelato in bed in their lavish suite at the Principe-Savoie Hotel — with its own indoor pool.... Marco is yet another wealthy, pampered and sequestered celebrity who is trapped and bored. Languidly paced with many long static shots, Somewhere is a precisely-observed, often silent portrait of a depressed movie star." Fortunately, "When his ex-wife dumps Cleo on him for a week, Marco comes to life." Whew.

"Weirdly, the movie looks like an acidly satirical comedy about LA celebrity but with all the acidly satirical comedy removed," writes the Guardian's Peter Bradshaw, "so that all that is left is a skeleton outline, a series of scenes and locations — hotel rooms, lobbies, swimming pools, luxury automobile interiors — in which essentially gentle, forgiving dialogue takes place.... Coppola is arguably very indulgent to both daddy and daughter, and to the rich and famous generally, and audiences may be bemused or exasperated, according to taste."

For the Evening Standard's Derek Malcolm, Somewhere "may last in the memory a little more than Marie Antoinette, if not quite as long as Lost In Translation."

Mike Collett-White reports on the press conference for Reuters.

"It's been 64 years since they abolished the monarchy in Italy, but judging by the reception given to Sofia Coppola at the Venice Film Festival, you'd imagine the institution was still alive and kicking," writes the Telegraph's David Gritten, adding that "all the Coppolas are beloved in Italy. Her previous films The Virgin Suicides, Lost in Translation, and Marie Antoinette have all been box-office hits in her ancestral homeland, and it was no surprise to hear that Somewhere will open in Italy before anywhere else in the world."

Updates, 9/4: "This junior league Antonioniesque study of dislocation and aimlessness is attractive but parched in the manner of its dominant Los Angeles setting, and it's a toss-up as to whether the film is about vacuity or is simply vacuous itself," blogs Todd McCarthy.

"Coppola's achievement is to have made an affecting and quietly funny film about such an unsympathetic character," writes Geoffrey Macnab in the Independent. "Johnny's character may be changing under the influence of his daughter, but he still seems the same coolly narcissistic figure at the end of the film as he was at the beginning. There is also the sense that he likes the celebrity lifestyle more than he is letting on. After all, the Chateau Marmont isn't exactly the Gulag."

"Much of what works in Somewhere is subtle and glancing, like the unemphasized comparison of fresh, natural Cleo to Johnny's jaded lovers," suggests Deborah Young in the Hollywood Reporter. "In two delightful scenes, repeated perhaps to show the unimaginative nature of his sexual fantasies, pole-dancing twins (Kristina and Karissa Shannon) appear in his hotel room performing to disco tunes. Not long afterward, Cleo performs an ice-skating routine to music in an equally succinct costume as her father looks on admiringly." What?

The Guardian's Mark Brown quotes the director: "I spent a lot of time, growing up, living in hotels when I was on location with my dad. A hotel is a world in itself and the people who stay there are always interesting, so I like hotels for settings. Also it's an impermanent place and people I am interested in are in a moment of transition."

Update, 9/5: "Somewhere has a lot of good impulses, and a salutary faith in an audience's patience; but the film's tone, in its script, performances and visual style, is studiously uninflected. It's a document of people seen remotely, maybe from outer space." Time's Richard Corliss: "Over the past decade, directors of movies and TV shows have gone nuts with shaky-cam technique. Bless Coppola for keeping her camera still, but she goes to the other extreme, of European minimalism. Like Johnny, the movie is an object in stasis. In the whole movie the camera moves only a few times, and then just to give a slighter wider or closer view of the same static image (like Johnny's head caked in makeup goo for a monster mark). Other directorial ideas smell of freshman film school: the opening shot, of Johnny driving in a wide circle six or eight times, matched by the closing shot, of Johnny leaving his car to walk straight down a highway. The film is sometimes too obvious, often too opaque." 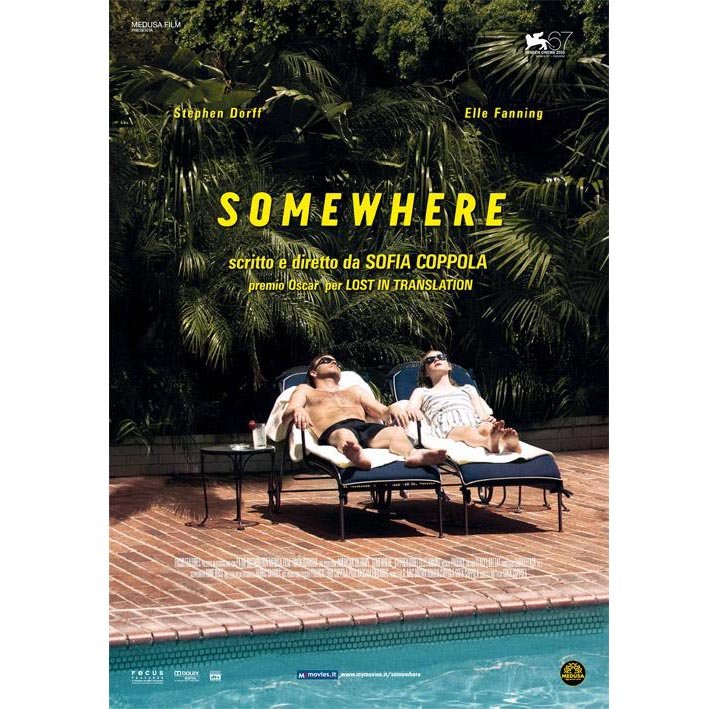 Update, 9/6: "When this kind of thing is done well, one gets The Leopard and The Garden of the Finzi-Continis and The Beautiful and Damned," writes Shane Danielsen for indieWIRE. "When it's done badly, one has an episode of Entourage. Coppola's film was not a disaster by any means. It had weaknesses — almost every joke, for example, went on one beat too long — but it also displayed craft and affection, indeed perhaps too much affection, and not the depth, the rigour of analysis, required to make this seem like anything more than a Vanity Fair cover story. But for this reason, it was tough to shake the feeling that Somewhere was simply an upscale version of Daddy-Daughter Day, made by someone determined to keep working out their own issues in public."

Update, 9/9: "There are some amusing moments, but the film lacks the comedy of Lost in Translation and the verve and risk-taking of Marie Antoinette," finds Roderick Conway Morris in the International Herald Tribune. "And the one-dimensional Marco's 'problems' will surely leave most viewers cold."