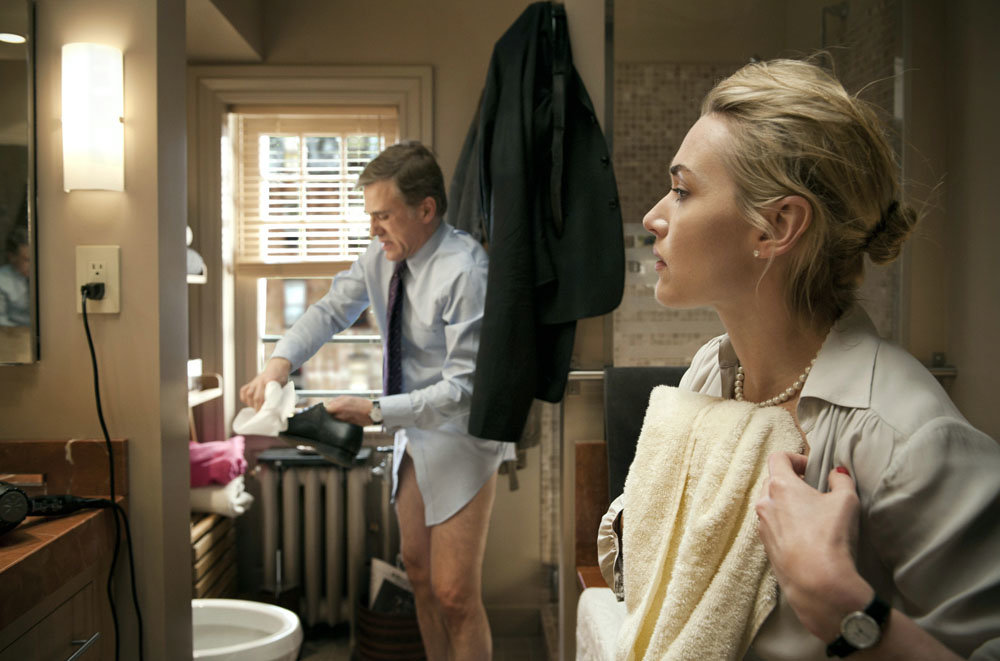 "The gloves come off early and the social graces disintegrate on cue in Carnage, which spends 79 minutes observing, and encouraging, the steady erosion of niceties between two married couples," writes Justin Chang in Variety. "But the real battle in Roman Polanski's brisk, fitfully amusing adaptation of Yasmina Reza's popular play is a more formal clash between stage minimalism and screen naturalism, as this acid-drenched four-hander never shakes off a mannered, hermetic feel that consistently betrays its theatrical origins."

"It is, in the final event, very much the play that critics and audiences swarmed around from its Paris debut in 2006," writes Guy Lodge at In Contention, "and such fans' relative satisfaction or disappointment with it will hinge largely on their individual response to the wholly refreshed cast. As with his well-acted but somewhat embalmed 1994 adaptation of Ariel Dorfman's Death and the Maiden, the director hasn't broken a sweat trying to Polanskify material that speaks very much to his sensibilities in the first place — it's not hard to imagine the beleaguered auteur filtering his own exasperation at the hypocrisies of the bourgeois moral police, however obliquely, through that of Reza." 2.5 out of 4 stars.

Oliver Lyttelton for the Playlist: "Two sets of parents — the liberal Michael and Penelope Longstreet (John C Reilly and Jodie Foster) and the successful Alan and Nancy Cowan (Christoph Waltz and Kate Winslet) — meet for dinner after their young children are involved in a playground dispute, and soon all their flaws, hypocrisies and deceptions are laid bare in a drunken evening that shows the parents to be no more civilized than their progeny… There's often a darkly funny undertone to Polanski's work, but this reinforces that he's got a real knack for comedy, for perhaps the first time since Fearless Vampire Killers, and we hope he doesn't neglect that particular muscle from here on out." Even so, Lyttelton then explains why he's giving Carnage a C+.

3 out of 5 stars from the Telegraph's David Gritten: "Waltz, as the rudest man in the room, gets the best lines. It’s well-acted and giddily enjoyable, if slightly less so once the characters start to analyse their descent into barbarism."

Updates: Todd McCarthy, writing for the Hollywood Reporter, is won over: "Roman Polanski has often been at his best in close quarters — the small yacht of Knife in the Water, the Warsaw ghetto of The Pianist, the house in The Ghost Writer, the apartments in Repulsion, Rosemary's Baby and The Tenant — so it should be no surprise that he's right at home examining the venality of the human condition in the living room of the Brooklyn apartment that serves as the setting for Carnage. Snappy, nasty, deftly acted and perhaps the fastest paced film ever directed by a 78-year-old, [Carnage] fully delivers the laughs and savagery of the stage piece while entirely convincing as having been shot in New York, even though it was filmed in Paris for well-known reasons."

Anita Singh has notes from the press conference for the Telegraph.﻿

"Polanski has rustled up a pitch-black farce of the charmless bourgeoisie that is indulgent, actorly and so unbearably tense I found myself gulping for air and praying for release," writes the Guardian's Xan Brooks. "If Carnage has a flaw, it could be that Polanski's apparent sympathy for Alan at times threatens to throw out the film's delicate, four-way balance. Arguably, it does turn a shade too shrill — and therefore too obviously farcical — in the final stretch, once the alcohol has been brought out and the mobile phone dumped in the vase of water. That aside, the film barely puts a foot wrong."

"As it spirals towards its amusingly messy conclusion the film loses its tightness and lapses towards drunken clichés, but Carnage is never if not watchable and enjoyable," finds Screen's Mark Adams.﻿

Updates, 9/2: "With the filmmaking placidly seamless the cast is likewise perfect, perfect at rising to the cliches that have been written for them, pushing them just a bit over the brink of absurdity, and holding them back — which will undoubtably lead many to accuse the film, surprisingly, of not going far enough, lacking the truest bitter edge, the harshest, freshest vision of humanity," writes Daniel Kasman here in the Notebook. "But what that criticism misses is the enjoyment of Carnage, not just that it is enjoyable to watch — its weird semi-theatricality and self-awareness of its own generalities adds a subtle, compulsive edge to everyone’s expected scene-chewing — but rather that everyone seems to be secretly enjoying themselves too, actors and characters."

"The weak link is Jodie Foster, who seems to not have fully realized that this is a comedy," finds Manolis at the Film Experience.

Alt Screen posts a roundup on Knife in the Water (1962), screening on Thursday as part of MoMA's Polanski retrospective.﻿

"Reza's diagram of devolution might be made for Polanski — if its satire weren't so timid." Time's Richard Corliss: "Dramatic logic might at least require that by the end the two men are fighting, as their sons had. But Carnage only skates on the surface of such de-profundis dramas as Edward Albee's Who's Afraid of Virginia Woolf and Rainer Werner Fassbinder's The Bitter Tears of Petra von Kant, or virtually any play by Harold Pinter, or The Lord of the Flies. For the ultimate satire of decivilization, see Luis Buñuel's 1963 film The Exterminating Angel, in which guests at a posh dinner party find they can't leave, anarchy slowly ensues, one couple commits suicide and sheep wander in to be slaughtered and cooked for food. How's that for a last supper? Reza isn't up to such grand misanthropy."﻿

Update, 9/3: "I couldn't help thinking of Sartre's Huis Clos," notes Demetrios Matheou at the Arts Desk. "Though this is infinitely more fun."﻿

An Alt Screen roundup on Rosemary's Baby, screening Saturday and again on September 24 at MoMA. 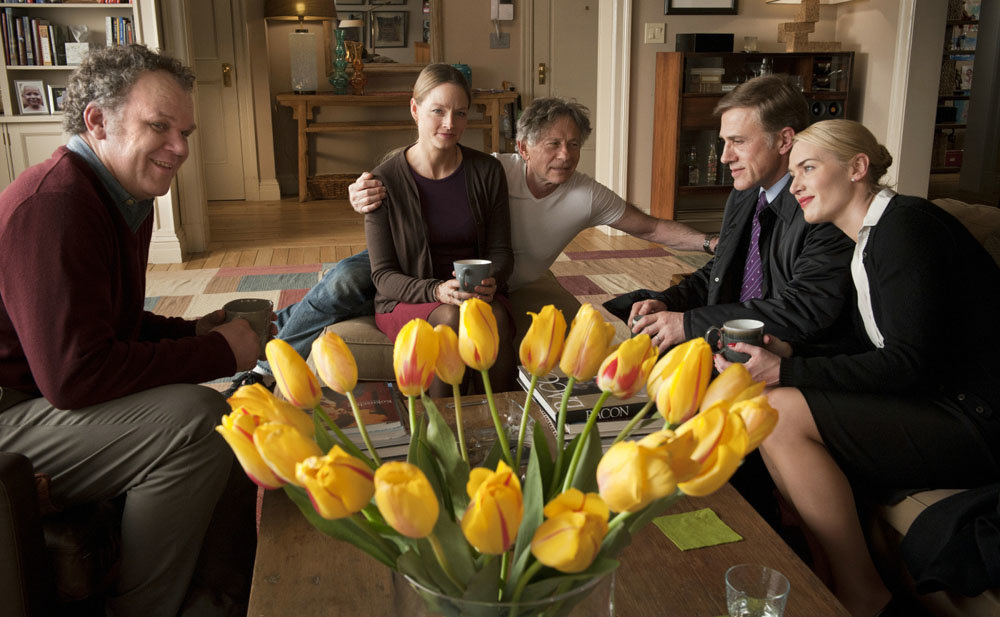 Updates, 9/7: "The release of Polanski's most recent film, The Ghost Writer, last winter almost opposite of Martin Scorsese's technically amazing yet ludicrously overbearing Shutter Island succinctly illustrated the kind of cinema that audiences, even professed cinephiles, seem to be more frequently favoring," writes Chuck Bowen in Slant. "Scorsese put on an obsessive formal fireworks show that was intent on living up to its director's status as a creator of culturally minted masterpieces, while Polanski quietly exhilarated with his immense knowledge of the kind of film craft that moves a story forward with two frames of film when another director may have needed 15…. The Ghost Writer is the type of witty, assured piece of filmmaking that our frenzied, hyperbolic pop culture has increasingly less room for, which makes the Museum of Modern Art's forthcoming, and impressively exhaustive, Polanski retrospective seem all the more comforting and, yes, even vital to introducing to new students of film one of cinema's most polarizing masters."

"Polanski's biography is a history of his times," argues Nick Pinkerton as he begins sketching the outline in the Voice. "He escaped the Krakow Ghetto before his voice had broken and, largely fending for himself, survived the liquidation of the Polish Jews. This was the beginning of a life that would be — often tragically — epochal. Polanski once opined, 'I am a toy in the hands of history.' But this small, unlikely, vulpine man launched himself onto the world stage with extraordinary will."

For the L, Elise Nakhnikian argues that "The Pianist is one of the best Holocaust movies ever made."

"But what does it mean when we so love the work of an artist that we feel obliged to sweep the master's crimes under the carpet, lest they infringe upon our adoration?" asks Laura Albert at Fandor.

Updates, 9/9: "Polanski's films regularly loop back to their beginnings, at times metaphorically, but often quite literally." For Moving Image Source, David Cairns walks us through the filmography.﻿

"The walls are always closing in and the neighbors conspiring against you in Roman Polanski's Apartment Trilogy, a set of landmark art films suffused with the brashness of B-horror," writes Tom McCormack at Alt Screen. "Each film in the series — Repulsion (1965), Rosemary's Baby (1968), and The Tenant (1976) — is a tense study in unraveling consciousness, an unflinching look at its protagonist's progressive alienation and total withdrawal from society."﻿

Carnage is competing in Venice and will open the New York Film Festival.﻿ For news and tips throughout the day every day, follow @thedailyMUBI on Twitter and/or the RSS feed.﻿