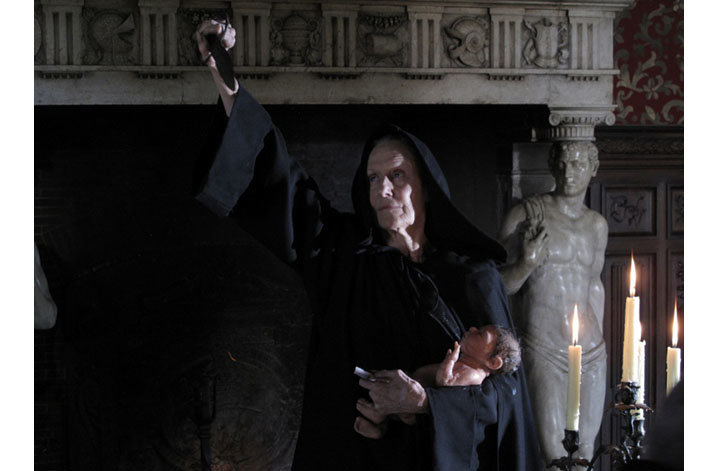 Last October, Breillat told Glenn Kenny here in The Daily Notebook that she was "interested in the tale of Sleeping Beauty since it's a symbol of adolescence and I think that that's also typically me. I going to choose to make the young girl fall asleep at the age of six, and have troubling disturbing frightening dreams until she wakes up [a full century later] at the age of 16 as a young girl. And to me I want to make it absolutely modern. I think there are resemblances with 36 fillette [Breillat's third feature, from 1988]. I also like the idea of taking this girl who falls asleep as a young girl telling herself scary tales who dreams like young girls do of fairy princess and having her wake up in an absolutely modern age, contemporary period, like in 36 fillette. I finished writing the script the day before yesterday. All of Perrault's tales are about 10 pages long so it's necessary to extrapolate what touches you and what their real inner meaning is."

"Breillat refrains on purpose from using special effects to enhance her image," notes Dan Fainaru in Screen. "Her fantasy uses real sets and costumes, designed with plenty of imagination, some lovely landscapes and frequent visual inventions, the plot being split into quite a few separate episodes, some amusing and some pretty stodgy. The visit to a No Man's Land inhabited by gnomes who won't take in strangers is certainly appropriate, the sight of a fawn carrying a little girl on its back through vast frozen landscapes is pretty breathtaking, while cinematographer Denis Lenoir contributes some carefully framed and lighted painterly references he is entitled to be proud of."

For Jon at Splendid Cinema, this "was an embarrassing mess of a movie," but that won't discourage most of us from anticipating an opportunity to decide for ourselves. Film-Zeit has just begun collecting reviews from the German-language press; nothing really substantial there quite yet, though. And just yesterday, Robert chose Breillat for the latest entry in his "Modern Maestros" series at the Film Experience.

In lieu of a trailer, here's Damon Smith speaking with Breillat for Reverse Shot in March about Bluebeard and "about fairy tales, death and eroticism, and the aesthetics of cruelty."

This summer, The TIFF Cinematheque ran the series Catherine Breillat's Anatomies of Desire. At the moment of this writing, the site is acting up and the program notes aren't entirely accessible, but there's a fine collection of links in the left-hand column. Meantime, a Breillat retrospective is on at the Cinémathèque française in Paris through September 20.

Update, 9/4: "Consensus on the Lido has it that this is a less satisfactory reworking than last year's Bluebeard," writes Guy Lodge at In Contention. "[H]aving found that film an arch, curiously tentative exercise in Angela Carter-lite, however, I was both pleased and surprised to find her latest visually richer, and conceptually more adventurous, than its predecessor.... [I]t's a pleasure to see Breillat this playful again, while much of the handmade, sweetly sinister imagery — notably a gaggle of kindergarten-age girls trussed up in hot-pink kimonos — couldn't stem from any other filmmaker's imagination. Breillat has bought herself another shot at the Perrault canon, should she so wish."

Update, 9/8: "Showing a film at Venice means having to hold a press conference in a room with 392 seats," reports Mark Brown for the Guardian. "For directors such as Sofia Coppola, Darren Aronofsky and Antony Cordier, the room has been more or less full. For Breillat, there were 370 empty seats." And as for Sleeping Beauty, he finds it to be "tedious, self-indulgent nonsense."

Update, 9/16: "I get what Breillat is trying to do here in the abstract," writes Noel Murray at the AV Club, "and the movie is never less than gorgeous to look at — but I wish the story hung together better. Instead Breillat follows her heroine from age 6 to age 16 as she travels the globe, meeting colorful princes and princes and having allusive conversations about growing up. The results are more soft and impressionistic than lingering."

This is one of Manohla Dargis's "Toronto favorites," she notes in the New York Times.

Update, 9/20: When the youngest of the three fairies "proposes that the girl 'be pricked by a yew thistle at six, sleep for 10 years and wake up at 16,' and is asked, 'What's the point of that?' she replies sagely: 'Childhood lasts too long.'" Time's Richard Corliss: "This film doesn't; it's over in 80 mins, yet it's got an adventure in the cave of a pustulent troll, a magical train ride and a tentative romance, between Anastasia and a peasant boy, that makes this a French kissing cousin to Let Me In."

Updates, 9/23: A roundup at DC's features an exclusive first look at the English translation of the first chapter of Breillat's new book, Abus de Faiblesse, as well as Dennis Cooper's commentary on five of her films.

As for The Sleeping Beauty, Michael Rechtshaffen, writing for the Hollywood Reporter, finds it to be "a typically dense and visually sumptuous production that's ultimately too opaque to be widely embraced."