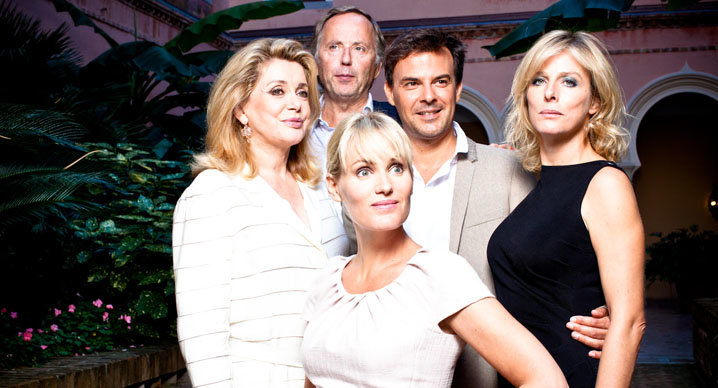 "Venice is this year becoming a festival notable for high drama and high camp, and so it proves again with this enjoyable, farcical French picture from the prolific master craftsman François Ozon, based on a 1980 stage play by Pierre Barillet and Jean-Pierre Gredy," begins the Guardian's Peter Bradshaw. "It's a wacky 70s-period screwball comedy with a blue-chip cast and a tone which is arch, knowing and self-aware but also somehow affectionate and even, I suspect, deeply serious about the indomitable spirit of France itself, in the queenly person of Catherine Deneuve. It is a veritable palimpsest of irony levels; perhaps only a French audience can fully respond to its nods and winks."

"Isn't Catherine Deneuve great? Doesn't she still look amazing? Wouldn't it be awesome if she ran the world? That's pretty much the full docket of questions asked by François Ozon's fizzy, silly, pop-brite comedy Potiche — the title is French for 'trophy wife' — and every one of them is rhetorical." Guy Lodge at In Contention: "Set in the late 1970s (for little reason, apparently, other than to let the production designers have a ball with geometric wallpaper and velveteen-covered phones), the film charts the decades-late, but otherwise swift, self-actualization of Deneuve's bored, pampered housewife, unhappily married to an openly unfaithful industrial magnate [Fabrice Luchini] and still doting on her now-grown children. When, through sitcom reasoning, she takes over as the figurehead boss of her husband's factory to appease striking laborers, she finds that she rather enjoys working for the first time in her life — and sets her sights on higher power ladder." All in all, Potiche is "both impressive and faintly exhausting, but with Deneuve having such contagious fun at the center of it, one is loath (not to mention a little scared) to complain."

"The strike, a threat to the family biz, forces Suzanne [Deneuve] to call on a communist ex-lover, Babin ([Gérard] Depardieu), who agrees to talk to the laborers," writes Boyd van Hoeij in Variety. "Depardieu, in another warm-hearted turn opposite Deneuve, finds the right notes of weariness for Babin, a somewhat tired, middle-aged idealist who's fought for workers' rights all his life; his presence ensures the film is about workers' empowerment as well as that of women. Clever parallels to today's world are clearly intentional and add a nice topicality."

Reports Camillo de Marco for Cineuropa: "When presenting his film to the press, Ozon said: 'I wanted to emphasize the underlying machismo that resurfaced during Sarkozy's electoral campaign.' Deneuve commented: 'There have been times in my life when I felt I was hired only for my looks. I would like to think that a film like this one can help women gain greater recognition, especially at work.'"

Update: For Shane Danielsen, dispatching to indieWIRE, Potiche is "the best thing [Ozon's] done since Sous le Sable: a sharp, funny, flab-free adaptation of a French theatre classic, it featured sparkling performances from both Catherine Denueve and Gérard Depardieu, and a final song, from the former, that was surprisingly moving, like some bittersweet summation of her career to date."

Updates, 9/9: "With a frothy, sophisticated, quick-witted script, Mr Ozon's film follows in the tradition of the American screwball comedies of the 1940s," writes Roderick Conway Morris for the International Herald Tribune. "And the transformation of Suzanne from a sidetracked supernumerary of whimsical eccentricity into a resourceful character of pivotal importance is a joy to behold in one of the most finely tuned, raciest and most gripping performances of Ms Deneuve's career."

"Though her transformation from mouse to lion is a foregone conclusion, Deneuve never loses the audience for a minute," writes Deborah Young in the Hollywood Reporter. "Her change of clothes and hair-styles from scene to scene is a laugh in itself. What the audience cheers for, though, is her final, triumphant combo of professionality and ageless femininity. Not only does she get the best of all the men, whose pretentious sexism is mercilessly lampooned; she ends up as the happiest person in the picture."

"Karin Viard is a treat as Luchini's secretary and mistress, who discovers the more fulfilling joys of entrepreneurial sisterhood," writes Mary Corliss for Time. "This bonbon of a film is as colorful as all the umbrellas of Cherbourg."

Update, 9/10: "This may be trivial stuff, and its origins as a crowd-pleasing hit play are evident, but director François Ozon is alert to the story's camp elements and exploits them shrewdly," writes the Telegraph's David Gritten. "It's funny and giddily enjoyable."

Update, 9/14: "Funny, twisty, and at times bittersweet, Potiche is a fluffy good time, but not entirely insubstantial." A B+ from Noel Murray at the AV Club.

Updates, 9/16: "With nods to Parapluies de Cherbourg (the factory makes umbrellas) and previous onscreen couples portrayed by Deneuve and Depardieu, Potiche breaks down character stereotypes with its tongue firmly in cheek, determined to have as much fun as possible in the process," writes Matt Riviera. "Helped by over the top production design, vintage tunes and a snappy pace, the risky endeavour delivers. The satire hits the mark, the comedy sizzles and the cast's chemistry ensures the fun is infectious. This distinctly French feel-good movie is to smart to be a guilty pleasure."

But for Fernando F Croce at the House Next Door, "It feels churlish to carp when a star is having so much fun, though I wish the material didn't play like a Gallic remake of Mamma Mia!"

Brian Brooks reports on the press conference for indieWIRE.