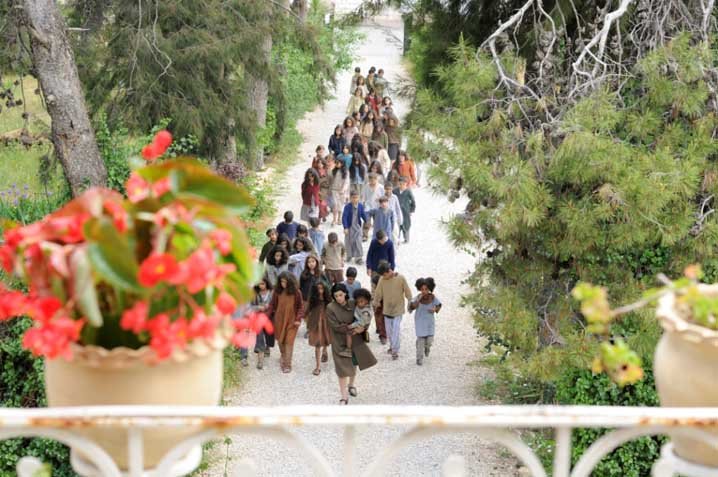 "While Julian Schnabel's Miral packs an emotional punch, he tells the wrong story," argues Anne Thompson. "I was in tears during both of the film's bookend sections, which focus on real-life Hind Husseini (the great Hiam Abbass), a wealthy Palestinian woman who in 1948 takes it upon herself to feed, clothe, educate and house thousands of orphans left abandoned and destitute by the ongoing wars and strife in Jerusalem.... While Husseini remains a character in the drama, the screenplay, adapted by Palestinian/Italian broadcaster Rula Jebreal from her semi-autobiographical novel, focuses on Miral (Indian actress Freida Pinto), a young girl born in 1973 whose widower father (Alexander Sidding) brings her to the orphanage to live during the week.... This kind of earnest agit-prop material is tough to adapt to the screen; Schnabel needed a more proficient dramatist to pull this off."

"The film's purposeful narrowing of its narrative avenues to the 17 year-old Miral's gradual involvement in the liberation movement, via a romance with Omar Metwally's hard-headed activist, would be fine if there was any evidence of an inner life to Miral herself," writes Guy Lodge at In Contention. "[A]s played with more effort than effect by Pinto, however, she's little more than a sounding-board for rival moral and political stances, hardly assisted by chunky, cloth-eared dialogue like, 'Thank you for protecting me and loving me all these years... I am so proud to be your daughter.'... For Schnabel's part, his stated passion for the material is scarcely evident in his screen treatment thereof, which rather awkwardly welds his pet visual and sonic tics onto a narrative that struggles to support them."

"[W]hile the film doesn't shy away from portraying everyday Israeli abuses of authority," notes Justin Chang in Variety, "its approach to the conflict is calculated to offend as little as possible; the predictable, can't-we-all-just-get-along coda would be easier to swallow were it preceded by a more politically engaged or personally engaging narrative."

"Despite its fragmentary style, it's appropriate that the film should be shown at Venice as President Obama attempts to re-launch the Middle East peace process," notes Derek Malcolm in the Evening Standard.

The exhibition Julian Schnabel: Art and Film opened yesterday at the Art Gallery of Ontario and will be on view through January 2. Murray White in the Toronto Star: "From bombastic 80s art world 'enfant terrible' — Google that cliché with Schnabel's name and count the hits, for a laugh — to his more recent career as filmmaker, Schnabel, here for a visit last week in surfer-dude clashing plaid work shirt and shorts, beat-up black Vans on his feet, gives the museum the rare opportunity to indulge in celebrity sheen."

James Adams in Saturday's Globe and Mail: "He's gone especially big in his art. Many of the more than 70 works in the AGO show are downright Cinemascopic in scale, among them three interrelated oils, each painted in 1990 on a tarpaulin 6.7 metres square. Schnabel, who turns 59 in October, easily mixes filmic and painterly conceits in his conversation. Sitting in one of the fifth floor's cavernous galleries, pointing to this epic-sized painting and that, he talks of how 'people can walk into this space and all of a sudden they're in the film. They're engaged in the process of seeing, and that process is like making something. Here, they're not watching the paintings. They're being with the paintings. They're being invaded by the paintings. And if they allow themselves to be emptied out, the paintings will fill them up.'"

Updates, 9/3: "The real-life romance behind the film could not have better advertised its subject matter," reports Arifa Akbar in the Independent. A "Jewish American film director and son of a Zionist mother meets a Palestinian woman [Jebreal] at an art exhibition, falls in love, reads about her traumatic childhood under Israeli occupation and brings her moving story to the screen. It was clear as Julian Schnabel premiered his latest film, Miral, at the Venice Film Festival yesterday that deeply personal forces had led to its making."

Geoffrey Macnab, also in the Independent: "There are distracting cameos from stars like Vanessa Redgrave and Willem Dafoe, who are on screen for a few moments and then disconcertingly disappear from the story without trace. Schnabel is covering three generations but his storytelling style is more cumbersome than nimble. At its most leaden, this is more like a school lecture in Middle Eastern history than it is a piece of drama."

"A political film with a message can't help but feeling a trifle old-fashioned and uncool, especially when it takes several shortcuts to make it easier for viewers to connect," writes Deborah Young in the Hollywood Reporter. "One is the choice, as in Schnabel's Cuba-set Before Night Falls, to film in English: only a few dashes of Arabic and Hebrew flavor the dialogue in translation. Also, most of the hard questions are glossed over or touched on ever so lightly: terrorism, the colonies on the West Bank, the Israeli army's wholesale destruction of Palestinian property. Rather than breaking ground, the film feels like a refresher course on the region's historical basics, but this back-to-school approach, which is fairly well done, could help widen the story's appeal even if it loses more sophisticated audiences."

Update, 9/4: "The aim of the film, dedicated to all those, on both sides, who believe peace is possible, is noble and sincere, a real ode to tolerance, and it shows us that you can teach pacifism while all around is falling apart." Camillo de Marco at Cineuropa: "But at the same time, the movie clearly takes sides, presenting — with just one symbolic exception — the Israelis as the 'bad guys' in the situation. With disarming naivety, the act of terrorism is dispensed with in one simple phrase."

Update, 9/6: "What a disaster," sighs the Guardian's Peter Bradshaw.

Update, 9/16: "Scarcely known for the searching intellectual rigor this story cries for, Schnabel here also stumbles as a mercurial imagesmith, applying his usual stylistic flourishes (canted camera angles, solarized hues, Tom Waits dirges) to the narrative like smeary paint on glass," writes Fernando F Croce at the House Next Door. All in all, "it's a middlebrow stew of distracting star cameos, stilted speechifying, and, in a particularly unwise move that bluntly calls attention to its deficiencies as a political-humanistic tract, references to The Battle of Algiers."

Update, 9/20: "Even those sympathetic to the plight of the Palestinians should be annoyed by the black-and-white view here," writes Time's Richard Corliss. "Come on, don't make it so easy."