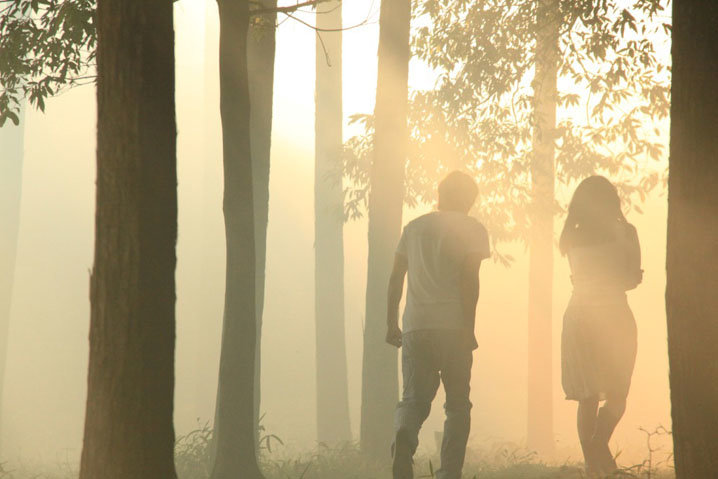 "With his striking visual sense and gift for conjuring a mood of languid sensuality, Tran Anh Hung would seem the ideal filmmaker to tackle Norwegian Wood, Haruki Murakami's beguiling novel of longing, loss and sexual curiosity in 1960s Japan." Justin Chang in Variety: "But while this beautiful-looking film at times succeeds in capturing its source material's delicate emo spirit, it's far less attentive to the richness of Murakami's characters — namely, a college student haunted by one woman and ardently pursued by another."

"[F]or its opening third, the film seems crippled by its awe for the source material," finds Guy Lodge at In Contention. "[R]eams of voiceover are applied to inform of us things that are (or at least should be) already abundantly clear on screen, giving the curious effect of an illustrated audio-book. The filmmaking gains in confidence once this technique is phased out for more hushed visual storytelling, but it also only underlines the fact that there isn’t much of a story here to tell — 133 minutes is a punishing length of time during which to be informed that teenagers both like and fear sex, and that death bums them out."

But for Screen's Mark Adams, "Tran Anh Hung does an impressive job of transferring he textured novel into a poetic and accessible screenplay, but more importantly films in such a lush and beautiful manner that even the slowest of moments are eminently watchable just in a sense of sheer visual delight."

In the International Herald Tribune, Roderick Conway Morris reminds us that Tran Anh Hung won the Golden Lion in 1995 for Cyclo. "Although the director does not speak Japanese, he believed it was essential to make the film in that country, both on account of 'the uniquely Japanese culture and sensibility palpable in the book' and because the landscapes of grasslands, woods and wild seashore — where, in Tran Anh Hung’s words, 'beauty and suffering co-exist' — play such an important part as corresponding expressions of human emotion. Considering his lack of the language, he has directed his outstandingly well-cast group of young Japanese actors with skill and delicacy."

So let's have Mark Adams run through that cast: "Toru Watanabe (Kenichi Matsuyama) who is lost in sorrow following the suicide of his best friend Kizuki (Kengo Kora). When he meets Kizuki’s long-time girlfriend Naoko (Rinko Kikuchi) he is drawn to her troubled sadness and gradually falls in love with her.... In Tokyo he busies himself with studies and part-time work, but also starts to develop a relationship with the confident, flirtatious  and elegant Midori (the impressive Kiko Mizuhara), despite the fact that she has a boyfriend. As Naoko grows  even more tormented by the ghosts of her past, so Toru finds he is forced to make a choice between the two women... he must make the choice between his past and his future."

Update: "The production design was immaculate; Jonny Greenwood's score was suitably anxious; and Mark Lee Ping-Bin's cinematography established beyond question his equal mastery of digital and celluloid.... And one can never underestimate the elegance of Tran's direction: both as a maker of exquisite images, and as a poet of melancholy, he is almost freakishly gifted. Why, then, did this feel so hollow? The problem resides, I think, in the source material." Shane Danielsen explains in indieWIRE.

Update, 9/6: "I found its languorous, slow-moving beauty superbly achieved," writes the Guardian's Peter Bradshaw. "The Jonny Greenwood score was plangent and mesmeric, and the film's style was entirely appropriate for its subject matter: the strange, unacknowledged sensuality in grief and longing for the dead.... I'm not being entirely facetious when I say that there is intense 'emo' quality to the film — almost a Twilight for the arthouse set — but it is beautifully made, well acted and offers a swoon of pleasure."

Update, 9/16: For Chris MaGee at Toronto J-Film Pow-Wow, Norwegian Wood is "lovingly crafted, exquisitely lit shots of its handsome cast's faces that ultimately when strung together had nothing to say."