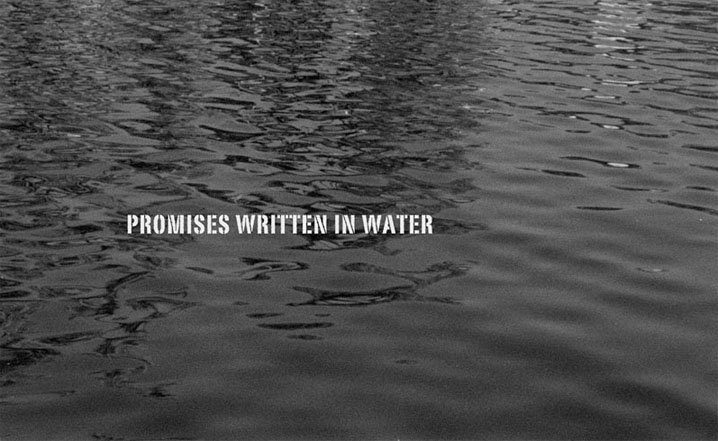 "My sense is that Promises Written in Water wasn't as bad as some were hoping, and was better than some were expecting," writes Stephanie Zacharek for Movieline. "Me, I'm on the fence: I'm a fan of The Brown Bunny, though I didn't see its disastrous Cannes debut. (Gallo recut the film before its US theatrical release.) I think The Brown Bunny captures something elusive about the inertia of grief, about the way intense emotional suffering can place you in a kind of suspended animation. I even like the lyrical tedium of the filmmaking, particularly the way Gallo's visuals capture the foreversville of long-distance driving. I'm not as sold on Promises — I think of it as The Lite Brown Bunny — but I can't bring myself to dismiss it, either."

"Promises Written in Water felt thin and oddly half-hearted," writes Shane Danielsen for indieWIRE. And he, too, places himself in the pro-Gallo camp. "Ostensibly a meditation on bereavement, it actually seemed even more narcissistic than his earlier work; suffice it to say, when Gallo holds the screen, no other actor matters, and his female co-star was often reduced to a fleeting, barely-glimpsed presence. Seemingly influenced by Warhol, and shot in a grainy B&W reminiscent of the early 1960s, it contained a handful of interesting individual shots — a woman dancing in a bare room; her face, later, turned in profile — among long scenes of pointless duration. But by far its most interesting feature was its willingness to play with dialogue, with Gallo repeating the same phrases, with minute variations, up to a half-dozen times, as if giving an editor various line-readings from which to select. Except that Gallo is his own editor, and will not cut anything. With the effect that the device that reeked less of attempted naturalism, than some William S Burroughs-like cut-up, draining the words of any sense or purpose. Perhaps that was the point: the suggestion that, before a grief as powerful as this one, language itself becomes meaningless, mere sound."

"Even auds predisposed to cut the film some slack will struggle to parse exactly what is going on here," suggest Leslie Felperin in Variety. "All in all, Promises has more plot than Bunny but makes much less sense, and proves considerably less engaging in general. Although there are lyrical bits... all rendered instantly retro-cool-looking by lenser Masanobu Takayanagi's grainy monochrome stock, there's almost no way to get any emotional traction going with characters we know so little about."

In the Hollywood Reporter, Deborah Young reminds us that "Gallo had three reasons for coming to Venice, including his starring role as an Afghan fighter in Essential Killing and a short film he directed, The Agent, starring Sage Stallone. Finally, playing in the feature competition, Promises Written in Water is an incomprehensible, disappointing effort in which he receives producing, directing, writing, editing, music and acting credits, so there really is no one else to blame if this story about a man who broods on love and death disappears into the waves almost immediately after its festival outings."

For In Contention's Guy Lodge, "The Brown Bunny at least had some semblance of nerve. Get worked up about the film's vagina close-ups if you must, but you'd be spending more effort on Gallo's work than he's giving you in return."

"Yes, Promises Written in Water is purely exasperating and abstracted to the nth degree," writes the Guardian's Xan Brooks. "It's only 74 minutes but it feels like forever; a film to make the time stand still. But it cannot by rights be regarded as a failure, or even as a joke, because one never has the sense that Gallo has lost control of his material. His film is what it is: an unvarnished, unapologetic chunk of black-and-white vérité about a pair of inarticulate souls living life on the margins. As such, it comes with a distinct whiff of danger. There is no telling just where it will go, or what it will do next. In the straitjacketed world of narrative filmmaking, that has to count for something."

And the Observer's Jason Solomons reports that The Agent, Gallo's 13-minute short, "consisted of a young agent shouting at the off-camera Gallo for most of its run time: 'You're a prick, you're a fucking prick.' The end credits then flashed up, and a disclaimer greeted with gasps by the assembled (rather small) audience: 'This film was brought to you by The Gray Daisy Foundation, a viewer-supported organisation dedicated to the advancement of outspoken Caucasion (sic) non-Jewish heterosexual good-looking male filmmakers and movie stars.' That agent was right."

Promises Written on Water screens in Toronto on Wednesday and Thursday.

Updates, 9/15: "Promises Written In Water belongs more to the avant-garde tradition than the narrative one, and TIFF has done right in putting in its Visions program," writes Scott Tobias at the AV Club. "I'm unschooled in Andy Warhol movies like Chelsea Girls, but the avant-garde experts in my circle (who by and large liked the film, incidentally) tell me that the film is working in that tradition." Even so, the film "makes me worry that Gallo's noodling is less a sign of liberation than creative exhaustion."

"Everything — the grainy black-and-white 16mm cinematography, the awkward, repetitive long takes in diners, the romantic ennui — is reminiscent of a certain style of immature yet sincere heart-spelunking," writes Time Out New York's Joshua Rothkopf.

Updates, 9/16: "Vincent Gallo's slender, tender film is a rare vision here at TIFF, and a precious vision of a relationship at that." Here in The Daily Notebook, Daniel Kasman sees more than one connection with the work of Philippe Garrel.

"The thing is, you can only pull a stunt like Brown Bunny once, and while that film felt like a more fully realized (self-)portrait, this one feels mostly like noodling," finds Time Out Chicago's Ben Kenigsberg. "Why I am I still stoked for his next film?"

"Promises is the movie that Gallo was rumored to have hijacked from its original director," blogs Karina Longworth for the Voice. "[F]or what it's worth, the film's barely-literate Wikipedia page insists that the collapse of one project had nothing to do with the birth of this one. And the synopsis of the film available on another Gallo-handmade site ― particularly the part about how Gallo's character is 'a long-time, professional assassin, specializing in the termination of life' — has little to do with what is actually on screen. A short feature composed of long takes, Promises is an elliptical study of the relationship between Gallo's character, who early in the film takes a job as an 'apprentice funeral director,' and a young blonde played by model Delfine Bafort." The film is "a kind of cinematic counterpart to his website: hand-crafted, and charmingly so, with an aesthetic simplicity — and beauty — that sits uneasily with Gallo's aggressive, defensive posturing. Its mash-up of high-art elements — a little bit of Persona, a little bit of Warhol; an unwillingness to leave narrative behind that manifests in detached manipulation — almost has a film student's naivete."

Update, 9/18: Fernando F Croce at the House Next Door: "Maddening as he is, Gallo really is an auteur after the ineffable, asking: How do you film 'Desire'? How do you film 'Loss'? 'I just find it difficult to talk about it,' says Bafort, moments before her nude body is explored by the camera in a sequence that's suspended somewhere between close-up portraiture and medical exam. As ephemeral as its title, the film is risky, limpid, and with a Borzagean delicacy flashing from under its Warhol-Eustache-Garrel grain."

Promises "is without a doubt the most experimental feature film I've seen at this year's festival, and that includes Apichatpong's Uncle Boonmee," blogs Michael Sicinski for Cargo. "He simply risks more, and as such he will always have as many enemies as champions. He truly 'brings it on himself,' but this is a component of a masochistic art of paper-light surfaces and fragile textures. It wouldn't work quite as well if half the world weren't ready to watch Gallo fail.... He deserves to share audiences with James Benning and Thom Andersen, but at this point he seems stuck in a ghetto all his own."