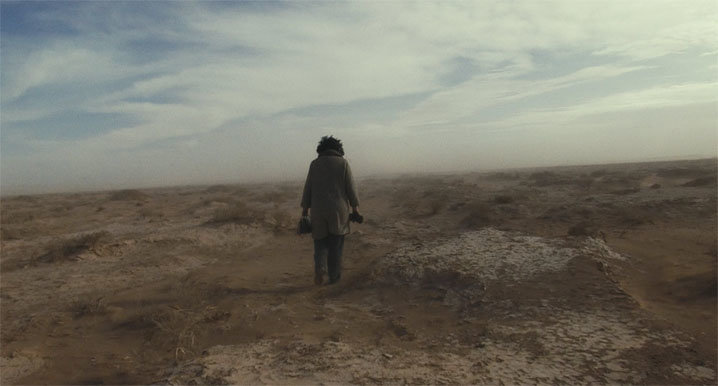 "Having dealt at length with China's 'anti-rightist' campaign in his epic documentary Fengming: A Chinese Memoir, Wang Bing continues to probe the devastating consequences of this little-aired historical chapter in his first narrative feature, The Ditch," begins Justin Chang in Variety. "Though a brisk jaunt at 112 minutes compared with Wang's three-hour Fengming and nine-hour West of the Tracks, this powerful realist treatment offers a brutally prolonged immersion in the labor camps where numerous so-called dissidents were sent in the late 1950s."

"Billed as right-wing enemies by the government for even mildly criticizing the Communist party or simply because of their background, many died of starvation, disease and exhaustion in the ditches that served as dormitories," explains Reuters' Silvia Aloisi. "Director Wang Bing spent three years tracking down survivors and wardens of the Jiabiangou and Mingshui Camps for the film, a surprise entry in the main competition line-up that was only revealed on Monday. 'For 10, maybe 20 years, independent Chinese cinema has focused above all else on the social problems of the poorest working classes in contemporary China,' Bing says in the production notes. 'The Ditch is perhaps the first film to deal directly with contemporary China's political past, talking as it does about the 'Rightists' and what they endured in the re-education camps. It's still a taboo subject.'"

"Most of the film was shot in simple underground dugouts lined with bedding, where the men sleep after work on a giant desert project that is to cover 10,000 acres," writes Deborah Young in the Hollywood Reporter. "The filmmaking is most powerful as a document of the nightmarish conditions in the camp, where the starving men are led to the extremes of cannibalism, but much weaker in dramatic structure. For one thing, it's hard to distinguish individual prisoners, whose terrible stories tend to blend together." Still: "Editor Marie-Helene Dozo weaves about 130 hours of HD footage into a handful of simple, haunting stories."

The New Yorker's Richard Brody translates a bit of Jacques Mandelbaum's interview with the director in Le Monde. Referring to Yang Xianhui's Woman from Shanghai, evidently known in China as Goodbye, Jiabiangou, he says that he "knew the story of the anti-rightist repression, but this book revealed to me its most sordid details, its most hidden sides." What the detainees told him in interviews "was, for me, the emotional mainspring of the film; it is essential for an understanding of contemporary Chinese history, which is the history of a monstrous uniformization of thought."

In lieu of a trailer, here a few subtitled clips, intercut with an unsubtitled and untranslated interview with Wang Bing:

The Ditch screens next in Toronto on September 15 and 16.

Updates, 9/11: The Ditch "is the most honourable film to emerge from the People's Republic in recent memory," declares Nigel Andrews in the Financial Times. "Needless to say, it was made in secret. Wang, a noted documentarist, awaits the government's response to having made the movie and then bringing it to Venice.... Miraculously, Wang finds a way to dramatise without overt or ostentatious drama. The acting and script — even including a harrowing monologue spoken in close-up by an aged inmate — are affectless yet powerfully affecting. There is no rhetoric in the camerawork, though something of John Ford in the aching infinity of the landscapes."

For Screen's Lee Marshall, "it's a stark, powerful but also unremittingly bleak work that plumbs the misery of what man can do to man in the name of an ideology."

Update, 9/18: "Like Michael Mann and David Fincher before him, Wang is shooting a fictional period film in highly contemporaneous-looking digital," writes Daniel Kasman here in The Daily Notebook. "His bare, undramatic camerawork, which creates continuous space between desert and dorms, workspace, livingspace and deathspace by moving between them all in single takes, and then breaking away with awkward but often pointed edits... is so physically grounded that the film retains a profound, ambiguous quality of documentary."