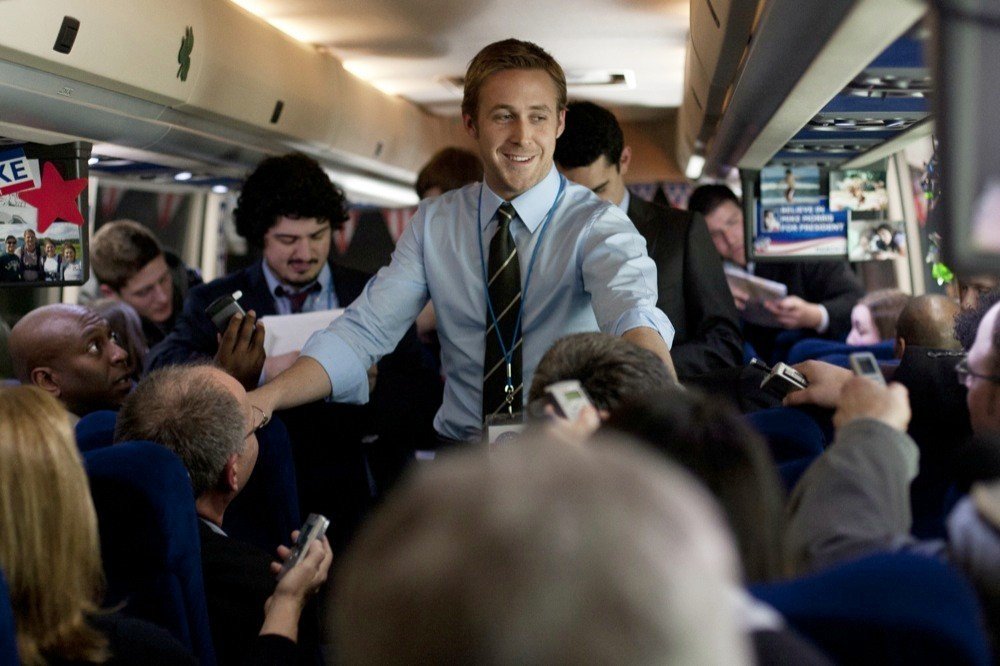 "A smart, confident kick start to what looks like being a notably strong Venice film festival, The Ides of March showcases George Clooney, its director, co/writer and joint lead actor, back in the politically committed mood that spawned Syriana and Good Night, and Good Luck." The Telegraph's David Gritten: "A political thriller exploring themes of loyalty, ambition and the gap between public ideals and private fallibility, it engages the brain within the context of a solid entertainment." 4 out of 5 stars.

At the Playlist, Oliver Lyttelton sets it up: "Stephen Myers (Ryan Gosling) is something of a wunderkind. Still in his 20s, he’s a senior adviser to the campaign of Democratic primary candidate Governor Mike Morris (Clooney). Morris seems to be the real deal, a once-in-a-lifetime kind of candidate, and Myers had never been more fired up, particularly with mentor Paul Zara (Philip Seymour Hoffman) at the helm, and something on the horizon with a sparky young intern (Evan Rachel Wood). But out of the blue, Myers is approached by a rival’s campaign manager (Paul Giamatti), who claims that front-runner Morris is going to lose, and who offers him a job, something that sends events spiraling out of control." Final grade: B.﻿

"The Ides of March is adapted from a stage-play by Beau Willimon, a former staff member on Howard Dean's brief, ill-starred presidential dash in 2004," notes the Guardian's Xan Brooks. "For much of its run, the tale comes steeped in the grubby details of Democrat politics, cherry-picking from a variety of sources, plundering from campaign folklore. On a live TV debate, Morris is asked whether he would still oppose the death penalty if his own wife were raped and murdered — a repeat of the question that skewered Mike Dukakis back in 1988. Elsewhere, Stephen echoes Lyndon Johnson when ordering the leak of a scurrilous rumour concerning a campaign rival. 'I don't care if it's true,' he quips. 'I just want to hear him deny it.' … Perhaps it's true that the public gets the films — and the politicians — it deserves. The Ides of March is tense and involving, a decent choice for the festival's opening-night film. And if that vote seems a little grudging, that's only because I can't help feeling that there were surely wilder, more interesting contenders that fell by the wayside. What remains is your classic compromise candidate: a film that set out with a crusading zeal but had its rough edges planed down en route to the nomination." 3 out of 5 stars.

In his 4-out-5-star review for the Evening Standard, Derek Malcolm assumes we won't mind hearing about a plot twist other reviewers seem to be going out of their way to conceal.

Updates: "[F]or a film that affects a jaded, it-was-ever-thus air about the reality of dirty politics (that title isn't exactly rich in ambiguity, either), the way it stares earnestly aghast at the characters' hypocrisies and double-crossings is itself naïve at best, and downright disingenuous at worst." Guy Lodge at In Contention: "It's some trick to pull off acting both knowing and aggrieved, and Clooney's line in irony is too self-congratulatory (and therefore self-defeating) to get there. Taking corruption as a given, we wait for the film to reveal stranger, more perverse details and consequences of the campaign process — not least given the intimate narrative radius of a single Ohio Democratic primary. What we get instead is an absorbing, occasionally witty liberal suit-opera on West Wing lines that nonetheless holds its juiciest sub-plots on a leash."﻿

The Guardian presents a set of photos from the premiere.

Willimon's original play, Farragut North, "made its Off Broadway debut in November 2008, just a week after President Obama's election heralded a renewal of faith in the electoral process and a resurgence of hope for the future of American leadership," notes Justin Chang in Variety. "Emerging three years later amid widespread disillusionment, bitter partisan squabbles and still-crippling economic woes, The Ides of March would seem ideally suited to these embittered times, and it retains enough of Willimon's crafty plotting and wicked zingers to work as slick big-screen entertainment. Yet by opening up the structure of Willimon's taut morality play — whose spare genius lay in its applicability to any campaign, any party — the screenwriters have attempted to make the text feel more specific and contemporary, but instead have inflated it into something implausible, toothless and weirdly dated."

Wood's character, Molly, is a youngish intern "who seduces Stephen in a smooth exchange in a darkly lit bar," writes Deborah Young in the Hollywood Reporter. "As soon as the sultry blonde comes on the scene, the film shifts away from the hot, rapid-fire political exchanges that set the stage, and into a film noir mode which is not unpleasant, but certainly less than could have been hoped for by the film's piquant and original first half…. Still the fine cast makes every line of dialogue count... Jeffrey Wright's brief appearance as an influential senator able to swing the election is an example of perfect straight-faced gravitas, while Marisa Tomei's crafty Times reporter is delightfully smart and underhanded."﻿

Time Out London's Dave Calhoun finds that the points Ides has to make "are valid, if a little obvious: shit goes on behind the scenes and people in the game are shits. Who knew? Yet it's good on the value of knowledge in political circles — and how that knowledge can be traded."﻿

"As director," writes Time's Richard Corliss, "Clooney fills the screen with the harried milling of any campaign and amps up the verisimilitude with appearances by TV talking heads Rachel Maddow, Charlie Rose and Chris Matthews. Clooney sees blustering bustle and edgy familiarity — giant closeups of private conversations — as the contrasts of political campaigns, which are, at heart, all rhetoric and no accountability. (That's the winner's burden.)" The screenplay "exists in the anachronistic world of traditional Democratic primaries as observed in Gore Vidal's The Best Man, Jeremy Larner's The Candidate and the Garry Trudeau-Robert Altman Tanner '88. The Tea Party is never mentioned; the closest The Ides of March gets to today's dirty skirmishes comes when Zara [PSH] explains why Democrats lose to the more disciplined and ruthless Republicans: 'They're afraid to get in the mud with the f---ing elephants.' The big suspense here is: Who gets to be Karl Rove? Still, this is a movie, not a docudrama; viewers should be pleased that the compromising positions of sexual politics receive more emphasis than a candidate's stand on the debt ceiling."﻿

Updates, 9/1: For Geoffrey Macnab, writing in the Independent, "the film harks back to the character-driven political thrillers that Michael Ritchie and Alan J Pakula used to make in the early 1970s during the Watergate era — films like The Candidate and The Parallax View. Extremely well-crafted and acted, the film was warmly enough received at yesterday's screening. But it lacks that sense of political idealism and indignation that made Clooney's earlier directorial effort, Good Night, and Good Luck so stirring."﻿

Updates, 9/2: At the Film Experience, Manolis notes that this is "the kind of film that everyone likes and respects but nobody is really passionate about." 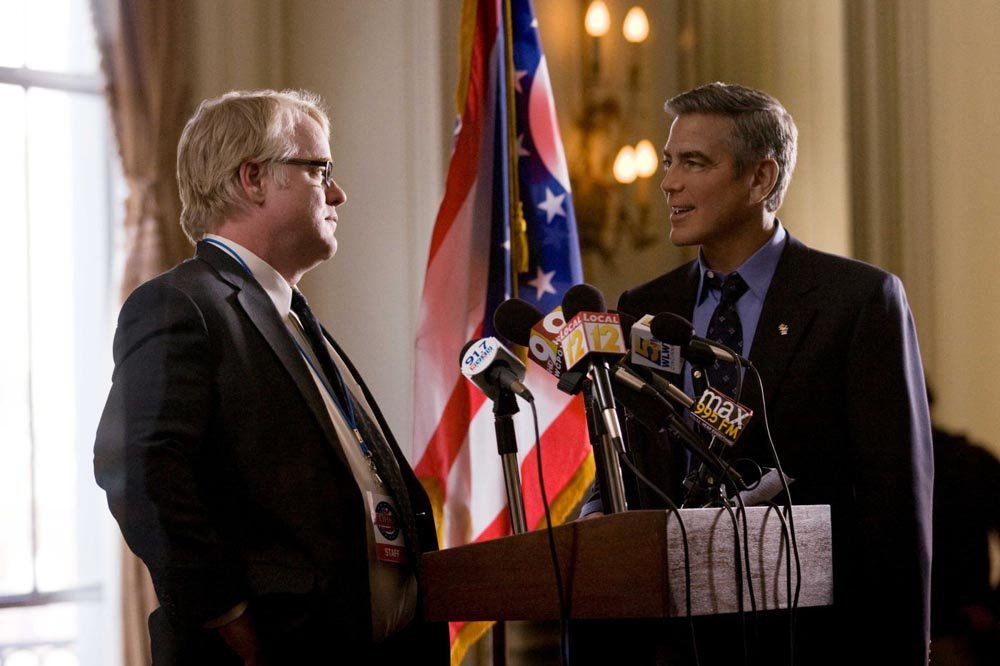 Update, 9/3: "To call George Clooney a movie star does the man an injustice, of course, since he's well on the path to becoming the most accomplished actor-director since Clint Eastwood," writes Demetrios Matheou at the Arts Desk. "With his home on Lake Como and his second, Oscar-winning film, Good Night and Good Luck, having premiered on the Lido, Clooney and Venice have a bit of form together. His latest, The Ides of March, keeps the affair in good nick."﻿

Update, 9/7: "If Clooney's Good Night, and Good Luck., with its harking back to 50s television (and, implicitly, the wave of 60s political movies often signed by former TV directors) felt like a nostalgic evocation of commitment in media," writes Christoph Huber in Cinema Scope, "The Ides of March surrenders wholeheartedly to current corruption, illustrating in the process that the 'political' movies from Clooney's gang since Syriana are not misguided attempts to ressurect the rich objectivity of Otto Preminger, but rather today's equivalent to the lazy pandering of Stanley Kramer. You go, Brutus!"

Updates, 9/9: The AV Club's Noel Murray: "This is a political drama that's not about big issues (though Clooney's character gives a lot of stump speeches that seem designed to paint him as a Democrat's dream candidate) but is instead about matters of trust, fidelity, and the perniciousness of rumor. And though that's probably a lot closer to what real politics is like, as drama it's pretty slight. Had The Ides of March been more like the work David Mamet or Aaron Sorkin — two writers capable of turning the language of powerful men into a weird, catchy music — then the movie might've had some real pop."

Blake Williams for Ioncinema: "As a film about the Democratic primaries in swing state Ohio, the script carefully skirts around preaching the party's ideologies, and focuses more on the leap-frog tactics and shaky loyalty that is rampant in the general political sphere. While there isn't much complexity in its thesis, it is nonetheless a gripping, well-spun yarn."

"At its best," writes indieWIRE's Eric Kohn, "Ides of March succeeds as a leaner, more outwardly aggressive version of Mike Nichols's Primary Colors, which skillfully explored the dichotomy between Bill Clinton's charm and his private abuse of power. Ides of March hints at a similar troublesome balance, but emphasizes the cutthroat nature of the men behind the curtain rather than the face they support. The title suggests a dramatic Shakespearean twist, but Clooney's aims are much simpler. As he builds to a western showdown divorced from political specificity, the Manchurian-like manipulation turns Ides of March into an allegorical monster movie in which everyone's competing for the role of the monster and most people can't see it."﻿

Update, 9/10: For Fernando F Croce, writing at the House Next Door, "the film shifts from Mike Nichols snap to Alan J Pakula anguish. As a filmmaker, Clooney shows a knack for widescreen bustle and jostling close-ups, for old-Hollywood lighting pierced by sudden splashes of red, white, and blue, and for cannily integrating his own celebrity image into a vigorous cast that includes Philip Seymour Hoffman, Paul Giamatti, and Marisa Tomei. Had it had a more complex argument on its mind than just 'power corrupts,' it could have been more than a solid, slick entertainment."﻿

Update, 9/11: "It's prestige-y, technically competent and lousy with the sex appeal of a phenomenal cast," writes Box Office's Sara Maria Vizcarrondo. "Medicore as it is, it's at least a conversation piece that's polite enough not to come out on an election year."﻿

The Ides of March is competing in Venice and will screen as a Gala Presentation in Toronto before opening in the US on October 7. If you're headed to Toronto, tiffr is a simple yet powerful way to schedule your festival.﻿ For news and tips throughout the day every day, follow @thedailyMUBI on Twitter and/or the RSS feed.﻿