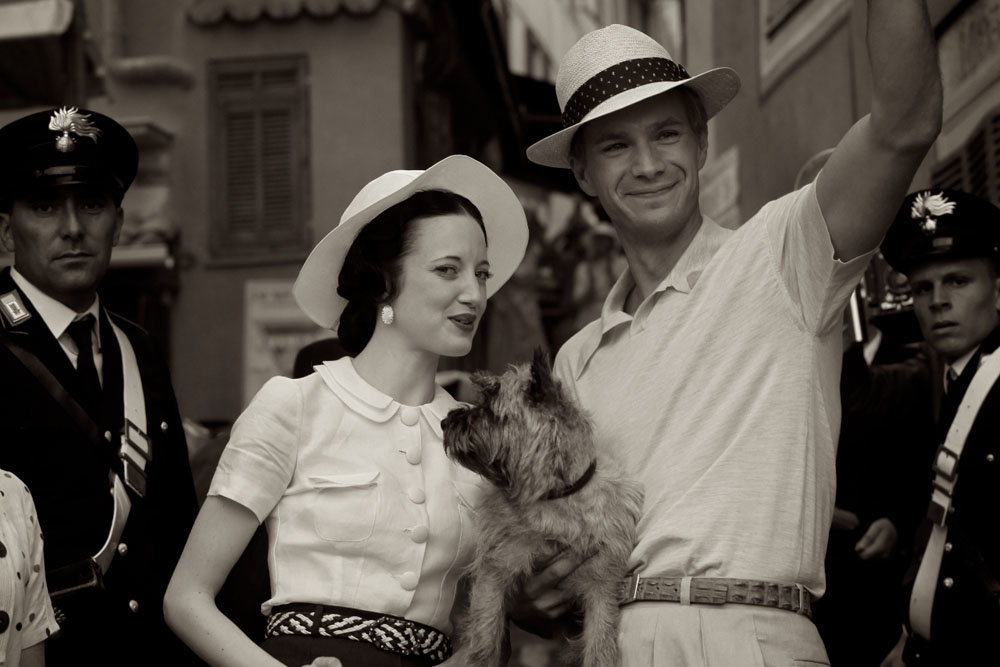 "Whatever the crimes committed by Wallis Simpson — marrying a king, sparking a constitutional crisis, fraternising with Nazis — it's doubtful that she deserves the treatment meted out to her in W.E., Madonna's jaw-dropping take on 'the 20th-century's greatest royal love story.' The woman is defiled, humiliated, made to look like a joke. The fact that W.E. comes couched in the guise of a fawning, servile snow-job only makes the punishment feel all the more cruel." For the Guardian's Xan Brooks, W.E. is "a primped and simpering folly, the turkey that dreamed it was a peacock." 1 out of 5 stars.

"The follow-up to her debut feature Filth & Wisdom, which premiered in Berlin, tells two parallel stories," explains Boyd van Hoeij at Cineuropa. "The first involves the historical figure Wallis Simpson (Andrea Riseborough), the twice-married American woman for whom the British King Edward VIII (James D'Arcy) abdicated. The second involves a 1998 New Yorker, Wally (Abbie Cornish), who was named after Simpson and is fascinated by her story. Written by the director and Alek Keshishian (who directed the documentary Madonna: Truth or Dare), the fictional film slides back and forth between the 1930s and 1998, when Sotheby's in New York auctioned off many items that belonged to Wallis and Edward (hence the film's title, W.E.)."

"It's clear that Madonna identifies with Wallis, and in particular her hounding by the press, with constantly flashing cameras becoming a recurring motif in the film," writes Oliver Lyttelton at the Playlist. "It's a self-financed passion project, years in the making, and she sets out, like Cornish's character in the later stages of the film, to reclaim her reputation, and to show that she sacrificed just as much for love as 'David' (the King's given name) did. And given the two-dimensional version of the characters displayed in The King's Speech (as played by Eve Best and Guy Pearce), showing the other side of the story isn't a bad aim. But if you set out to write and direct a film with such an ambitions, it helps if you have some capacity for writing and directing films, and on this evidence, the pop legend still doesn't have either." Grade: F.

For Todd McCarthy, writing in the Hollywood Reporter, Madonna "reveals a dynamic in which Wallis, her intimacy with Edward slowly morphing into unwanted isolation, soon becomes a pawn (never to be a queen) on the royal chessboard, virtually helpless to resist being moved about by forces far more powerful than she. This feeling of inevitability, backed up by snippets of Wallis's own letters registering feelings of being trapped, and her and Edward's eventual sorry fate as 'the world's most celebrated parasites,' is the one aspect of the story that rings true on a human level and is appealing and almost touching for that. The rest, unfortunately, feels artificial, programmed, rote."

"It all looks good," grants David Gritten, "or at least glossy, in the manner of high-end cosmetics commercials. Exotic locations (Portofino, Cap d'Antibes) are visited and luxury brand names (Moet, Cartier, Schiaparelli) tossed around. Wally pays repeatedly visits an auction of the Windsors' possessions; W.E. often feels like an extended infomercial for Sotheby's New York." 3 out of 5 stars in the Telegraph, where you can read a "potted history" of Madonna's career and Anita Singh's report on the press conference. Meantime, Gritten clarifies his stance over at Anne Thompson's place: "My view on W.E. was that it's silly and forgettable, but you could choose to be appalled or amused by it, and I chose the latter."

Updates: Yes, W.E. "is at times comically bad," concedes Movieline's Stephanie Zacharek. "But it's also criminally watchable: Even through its many dull patches, where Madonna felt the need to carefully frame characters in doorways and hallways for no good reason, I couldn't take my eyes off it."

At least "it's in focus, which is more than can be said for the script," chuckles Variety's Leslie Felperin. "If W.E. were prose, it would be italicized and in bold caps, so banally does it juxtapose events in Wally's and Wallis' lives: We see Wallis having a baby beaten out of her by her first husband in the 1920s, just as Wally consults a doctor about IVF; Wallis meets Edward, then prince of Wales and heir to the throne in the 1930s, amid several would-be meet-cutes between Wally and Evgeni; and so on. At times, the two women walk into each other's stories and interact, a not-so-subtle sign that this is all some kind of amorphous fantasy, although whether it's Wally's fantasy or Madonna and Keshishian's is never quite clear."﻿

Updates, 9/2: "Nestled in the final minute of a decidedly over-generous 120 comes the list of 'Thank Yous,' upon which you may or may not be surprised to encounter the names John Galliano and Leni Reifenstahl (sic)," notes Guy Lodge at In Contention. "The names may be there for perfectly fair reasons. Galliano is a genius fashion designer, and Madonna's film is nothing if not well-dressed. Riefenstahl was a genius metteur en scène, and Madonna's film is nothing if not — well, perhaps she just likes Riefenstahl's films, even if any claim of creative influence would be on the tenuous side. The irony of thanking two prominent alleged Nazi sympathizers, mere minutes after W.E. goes to manful if unconvincing lengths to discredit any suggestions that the Duke and Duchess of Windsor had similar leanings, is incidental, and perhaps a little cheap to pick on, but merely one small symptom of Madonna the Auteur's astonishing lack of self-awareness."

"Swooping camerawork, slow motion, fetishised close-ups, and delirious music are used in even the most routine scenes," writes Geoffrey Macnab in the Independent. "The visual inventiveness blinds us to the occasional banality of the storytelling."

Breaking ranks, Screen's Mark Adams is won over by "a beautifully staged film punctuated with nuggets of charm and style and dominated by a majestic performance by rising star Andrea Riseborough as Wallis."﻿

"It's not an inept film, far from it," grants Time Out London's Dave Calhoun, "and Madonna has obviously pulled in a lot of talent behind the camera to make it an experience that's easy-on-the-eye for anyone that shares her obsession with this subject. But her film has no real vision or coherence to it in terms of ideas and what it wants to say. Throw in a bit of Baz Luhrmann here, a bit of Sofia Coppola there, take some tips from Tom Ford and A Single Man, lap up the locations, go heavy on the exposition and don't scrimp on the costumes… You can see what she's doing, but the transparency is the problem."﻿

Update, 9/5: "Madonna has revealed that she plans to release her 12th studio album in 'spring 2012,'" reports the BBC. "It will be her first album since parting ways with record label Warner Brothers — she has now signed a new deal with entertainment firm Live Nation."﻿

W.E. screens Out of Competition in Venice and will be a Gala Presentation in Toronto. For news and tips throughout the day every day, follow @thedailyMUBI on Twitter and/or the RSS feed.﻿