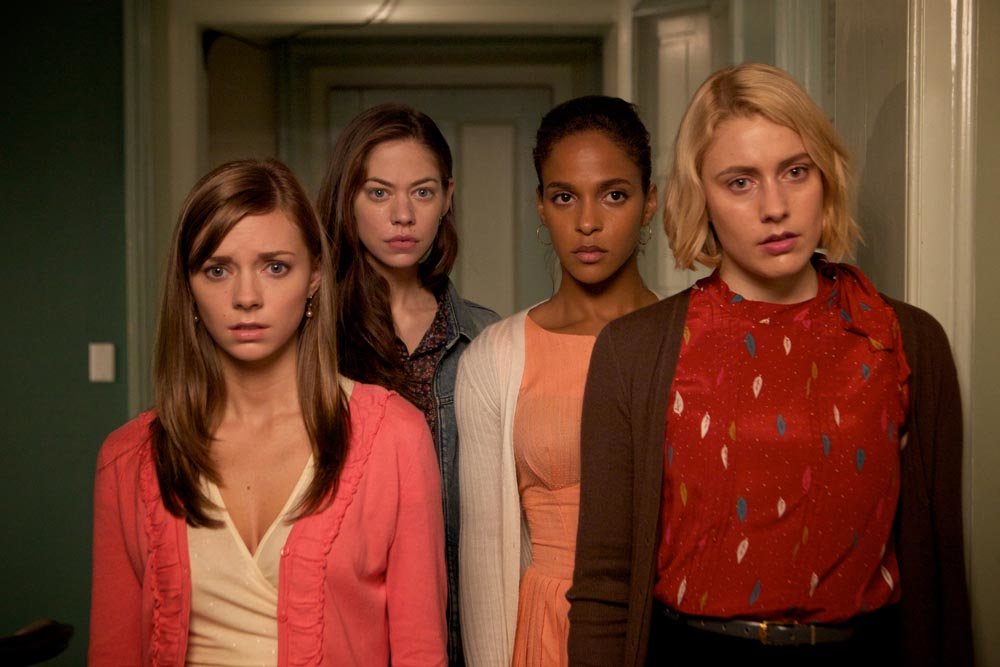 In Contention's Guy Lodge was worrying a couple of days ago in Venice that the "unwritten rule of major festival programming that the closing film should be, if not shit, at least aggressively mediocre" might apply to Damsels in Distress, but "it gives me no small amount of pleasure to report that Stillman's latest is an unequivocal delight — a warmly off-kilter and wholly unique campus comedy that... has provided the purest shot of joy in the entire festival. That's not to say Stillman has gone cuddly in the lengthy hiatus that followed 1998's The Last Days of Disco: the director's many patient fans will find his skewed wit and dryly affectionate mockery of the East Coast upper classes pleasingly intact, even if the film surrounding these virtues is perhaps a shade broader and more heightened than his three previous features. Newcomers to his work might take a few scenes to adjust to his exactingly verbal, language-besotted humor, which can turn on a single line from sweetly daffy to cuttingly perceptive — if 'black whimsy' is a genre, he's still one of its foremost practitioners — but should be lured in by the frisky pace of the piece, not to mention its luxuriance of finely whittled one-liners."

"Welcome to Seven Oaks University," announces James Rocchi at the Playlist. "Shot in soft honey hued yellows and baby blue pastels, there is no doubt you are stepping into a hyper-realized, dreamlike East coast college campus, and whether or not you're familiar with that world (or its sensibilities) will largely determine your enjoyment of the film. Indeed, Violet Wister (Greta Gerwig) and her gals Rose (Megalyn Echikunwoke) and Heather (Carrie MacLemore) are hilarious archetypes of intelligent and well-intentioned, but somewhat arrogant and pretentious students (usually of the art school variety) who perceive those outside their circle with a certain condescension and pity. Violet is determined to make a difference in people's lives any way she can and her first project is Lily (Analeigh Tipton), a new transfer student who she hopes to guide around Seven Oaks, and who soon ends up rooming with the girls. Taking Violet's strange but determined goals to heart, she joins the girls at the campus Suicide Prevention Center where they work and push forward their ideals that good hygiene, tap dancing and the pleasant odor of perfume are the keys to mental health."

"Chirpy Violet herself needs assistance when her frat-boy paramour Frank (Ryan Metcalf) leaves her for another student," writes Neil Young, picking it up from there in the Hollywood Reporter. "Lily, meanwhile, encounters emotional turmoil of her own as she ponders the charms of two potential boyfriends, including Charlie (Adam Brody) a smooth talking charmer who isn't all that he seems…. The damsels all get their chance to shine, with Tipton genially appealing as the audience surrogate voice of (relative) common sense. But this is in many ways Gerwig's show: She's pitch-perfect here, infuriating and irresistible as a woman genuinely determined to influence world history by inventing a new dance-craze. And while Gerwig continues her steady ascent, relative newcomer Metcalf also emerges as a real find. His Frank is a sweetly dunderheaded oaf, one who's perhaps a much better match for the refined Violet than she'd ever dare or deign to admit."

"Wildly ambitious (yes, there are actual musical numbers) and yet still of a piece with Stillman's now-classic filmography," writes Karina Longworth for the Voice, "Damsels is built around a tour de force performance from Greta Gerwig, whose facility with Stillman's distinct, nearly affectless patter is as impressive as her song-and-dance stylings are comically charming. As is usual for a Stillman effort, Damsels is a film-length referendum on dating mores and philosophies of social correctness couched in an episodic romantic roundelay in which the swapping of suitors is a path to moral determinacy. Unusual for a Stillman film, the movie's subjectivity swaps, too, about halfway through, from one damsel to another. Doug Emmett's sun-dappled cinematography offers a distinct visual style to match the fractured fairy tale elements of the story, which build steadily towards a Busby Berkeley-esque, musical medley, narrative-swallowing finale. Oh — and there are running jokes about anal sex, delivered with Stillman's patented WASP prudery. It may be my favorite film in Toronto thus far."

Updates: The second voice of dissent comes from indieWIRE's Eric Kohn: "Stillman's lengthy filmmaking absence puts an unfair amount of pressure to deliver something transformative, but he hasn't risen to the bait. Playing with the quirky stereotypes of upper class college life, Stillman delivers a minor work that's nevertheless amusing enough if viewed outside the shadow of its superior predecessors."﻿

For Noel Murray, "where Metropolitan, Barcelona and Disco had an earnestness interlaced with mannered comedy, Damsels in Distress is outright loopy." That said, "I was swept away by how original Damsels is, and how funny…. This is less Jane Austen, more Little Lulu." And from his fellow AV Clubber Scott Tobias: "Peel back the 15 layers of irony and I'm not convinced there's much to Damsels in Distress, but funny is funny, and Stillman allows Gerwig's daffy charm and blankly inflected line-readings to set the tone. Between the accumulation of droll one-liners and the bright, infectious song-and-dance numbers, the film overcomes its lumpy, episodic pace and a stiltedness that's not wholly by design."﻿

Dissenter #3 is Movieline's Stephanie Zacharek, who finds that "the movie is confused and wayward, featuring slapdash musical numbers for no good reason other than to try to inject a shot of much-needed romantic charm. The vaccine doesn't take."﻿

"As in the director's previous films," writes Gabe Klinger for Sight & Sound, "Damsels wears superficiality on its sleeve but ultimately manages to express something more deeply felt about its characters in the calibrated space that it leaves between scenes. It's refreshing to see a movie dealing with young people that rewards the audience by not bombarding them with every detail they need to know about the characters (per Mean Girls (2004) and its ilk) right at the outset. Stillman also seems to be playing consciously with the disconcertment of an audience who will have to scratch their heads wondering whether they're watching rote teen fair or a serious arthouse experiment (it stays tethered somewhere in between).﻿"

Update, 9/18: "[I]f his films were always overstuffed with riffs and ideas, this one — after his taking time off for over a decade — does feel like too much was pent up," writes New York's Logan Hill.﻿

Update, 9/23: "We identified with the hyper-literate yuppies (or Urban-Haute-Bourgeoisie, as they'd prefer) of Metropolitan and The Last Days of Disco because we knew how painful their assimilation into society's cynicism would be," writes Joseph Jon Lanthier in Box Office. "Over the last decade Stillman seems to have become convinced that his cozy milieus don't even need to think of stooping to brace themselves against even mundane discomforts."﻿

Venice 2011 Index. For news and tips throughout the day every day, follow @thedailyMUBI on Twitter and/or the RSS feed.﻿