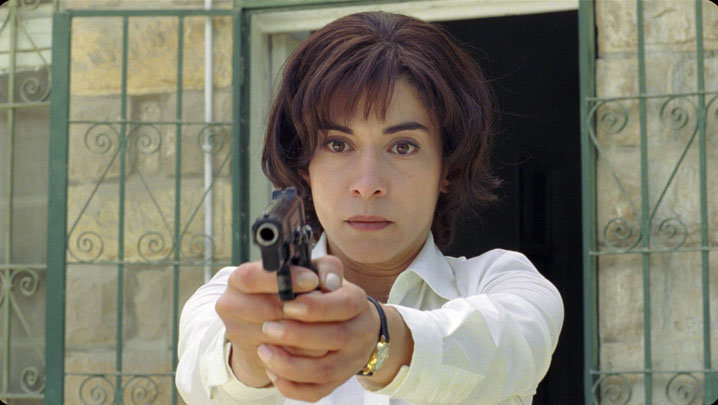 Blogging from Telluride for TCM, morlockjeff found that among the "most powerful" of the films he caught was Incendies, "directed by Canadian filmmaker Denis Villeneuve and set during the Lebanese civil war of the 1970s in which both Muslims and Christians suffered horribly amid the landscape of ethnic cleansings and random violence."

It "opens with the last wishes of a single mother who has instructed her twin children to find a father and brother they never have met," writes John Horn for the Los Angeles Times. "The request is unusual, but what the young woman and man discover as they begin their quest is extraordinary. Even though Canadian writer-director Denis Villeneuve's film is mostly set in the modern day and adapted from a recent play by Wajdi Mouawad, it owes its narrative DNA to Sophocles: The film's title, translated from French, means 'Scorched,' and the movie's psychic and physical fires burn hot and deadly."

"The action alternated smoothly between past and present," writes Shane Danielsen for indieWIRE, "its stages marked by chapter-headings (like [Julian] Schnabel's [Miral], alas), and slowly, steadily turned up the heat, leading to a final revelation, a twist in this bitter little tale, that was both appalling and at the same time, a kind of coup de theatre. Villeneuve is a phenomenally gifted writer and director, as anyone who saw August 32nd on Earth or Polytechnique will attest; and this film stands as the summation of his achievements to date. The standing ovation he received at its public premiere was entirely deserved. Not least, for sidestepping both the cliches and the slippery moral equivocation that made other films on the same subject — Miral, for instance — so laughable."

"As stage-to-screen adaptations go, Incendies reps an unusually bold departure, transforming from its talky original form to a more purely cinematic presentation," writes Peter Debruge for Variety. "Whereas language supplied the lifeblood of the original play, here, Villeneuve excises entire blocks of text, reducing speeches to mere sentences while seeking the most potent visual equivalent for each scene... Despite the film's deceptively realistic feel..., Incendies remains fundamentally didactic, particularly in its stunning final revelations. In the end, something doesn't quite add up in the ages, dates and other details, including the coincidence that allows Nawal to write both letters, but by that point, this emotional firecracker has built to such a powerful place, it's too late to object."

For Stephen Saito, writing at IFC.com, "Villeneuve's narrative is as much about the ongoing miseries in the Middle East as it is about the individual story of Nawal... Even though Villeneuve finds a uniquely damning way to suggest the cycle continues while resolving Nawal's storyline for the film's conclusion, Incendies still never feels like a whole, ultimately leaving more questions to be asked than Jeanne and Simon have the time or interest in finding out the answers for."

IndieWIRE's Eugene Hernandez quotes from Villeneuve's notes: "How can we break the cycle of anger that has sparked endless violence? How can we make peace among feuding peoples, inhabitants of a region, or relatives?"

"The cinematography is haunting, the acting emotionally resonant and the entire film compelling from frame one to the finish," writes Mark Bell in Film Threat.

Incendies screens in Toronto this evening and tomorrow afternoon.

Update, 9/14: Steven Zeitchik reports for the Los Angeles Times that Sony Pictures Classics has picked up US distribution rights.

Update, 9/15: Stephen Farber in the Hollywood Reporter: "The deepest theme of the film is quite riveting — the idea that children have only the vaguest idea about their parents' lives before they were born. We imagine that we must know how our parents' early lives unfolded, but it requires a huge leap of imagination to enter into the worlds that formed them. That is the odyssey that Jeanne undertakes, and she finally entices Simon to join her. The surprise that awaits them at the end of their journey drew audible gasps from the Telluride audience."

Coverage of the coverage: Venice, Telluride and Toronto 2010. For news and tips throughout the day every day, follow The Daily Notebook on Twitter and/or the RSS feed.