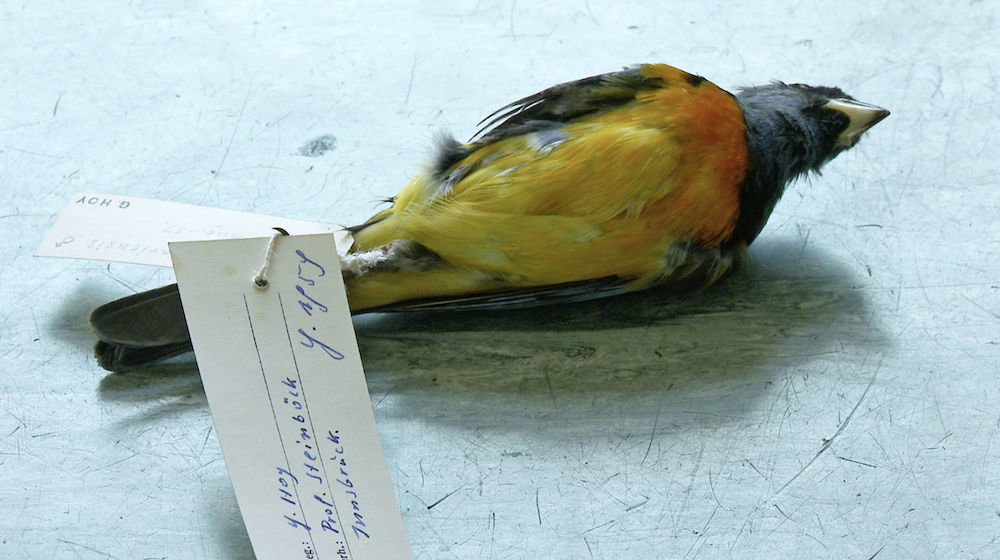 ﻿James Benning has long been a favorite at the Viennale and in Vienna, programmed both by the festival itself and by the Austrian Film Museum, which has worked to restore some of Benning's great works of American structural avant-garde (American Dreams [lost and found], Landscape Suicide), as well as released those and others on DVD and published an excellent anthology on the filmmaker. Preceding the Viennale this year but later playing at the festival at a conventional theatrical screening was the premiere of a new film by Benning commissioned by, about, and installed in a gallery at the Museum of Natural History Vienna (Naturhistorisches Museum Wien), natural history.

Having only seen Benning's stately, contemplative films in the mostly reverent silence of screenings at festivals, avant-garde programs, and cinematheque showings, watching this superficially unusual film from the American minimalist in an active, lit, and public environment was quite a different experience. Posited by the museum’s director Christian Koeberl as possibly Benning’s only work shot indoors, the 77-minute natural history is a series of almost entirely still, almost entirely humanless shots inside the museum, essentially alternating, or nearly so, images from the archives—not the exhibits—of the museum's collection with images of corridors, hallways, offices, and other rooms hidden within the building.

Ironically, while Benning purposefully avoids showing the public-facing side of the institution—unlike Frederick Wiseman's more space-weaving National Gallery, also shown at the Viennale and to which natural history will bear some comparison—and while in a theatrical context this film remains in this way "one-sided," during its exhibition at the institution the opposite is the case. The film faces its public, the projected screen a passway to the archives and arteries that make up the bulk of the institution's collection, work, and the building's size. My audience made this abundantly clear; while most adults who passed through or peaked into the gallery space were transients, a group of what must have been school children—unsupervised—around 12 years old had bivouacked in front of natural history and variously ignored and interacted with it.

Benning's ambiently quiet movie—mostly filled with muffled building noise taking place in some abstracted distance from whatever he is photographing—was drowned out by the 12-year-olds' German babbling. One rotund child kept trying to attract attention by stepping up to the screen and variously pointing at still lives of stuffed animals or preserved insects with his umbrella, or pretending to interact with the image: when a deathly silent office erupted in a braying telephone ring, startling the inattentive kids into alertness, first looking around the room for the source and then realizing it was the movie, the pedantic boy mimed answering the phone, pulling it from the screen. Later, the showboating child being fatigued or otherwise occupied, the girls took over, prancing and dancing in front of still lives of dead birds. A frozen herd of donkeys, zebras, and other equus—grouped close and facing out of the screen as in arrested genus stampede, watched from bleacher-like shelves by stuffed monkeys—drew most of the kids from their seats to play along with and poke at images of the dead-eyed, immobilized animals.

This activity balanced in counterpoise the serene stillness of Benning's images, which, recorded digitally and in climate and light controlled interiors, barely if ever gave hints at any sort of activity of liveliness, changes in luminosity or wind, or any other movement in the image. I wouldn't be surprised if those who quickly walked into the gallery, looked at the projection for a beat, and left, assumed it was simply a slideshow. (The shot length varies from very long takes to very fast edits; Benning apparently modeled the number of shots and their length on some aspect of the first 27 digits of π﻿.) Life that's already been past, been embalmed, numbered, labeled and archived is re-presented in the animation of digital video, and yet seemingly frozen further. The for the most part nondescript offices and back-rooms are as dead as the preserved animals, and in one way, in their deathly stillness, as interchangeable: Benning cuts from boardrooms to the bowels of the building indiscriminately. Time can certainly be considered one of the artist's great explorations, and his movement inside the Museum of Natural History seems to stop it in its tracks; a narrative in the film can't be discerned; if it were not for the buzzing of an overhead bulb, some off-screen distant murmurs, or one of the three shots of anonymous, passing humans, one would think this is a place of timelessness, of no time, of time arrested in multiple ways, arrested on top of itself. The film ends, somewhat expectedly, with a stuffed ape gazing back at us directly, an animal forever stuck with an expression of wistful inquiry, ceaseless but dead, which Benning directs at us in perpetuity (that is, until the film is over).

The children provided the hope. All the many corridors and passageways of the film are curtailed or thwarted; there are doorways out, always, but the portals are closed, the line of sight cut off. And yet at the appearance of a staircase to a characteristically barred set of the doors, the kids spontaneously got up and started playing. They posed in front and fake-climbed up and down, and when they got bored of this, they dragged each other gleefully around the floor in front of the projection wall, and it was as if the stairway led into the room itself, into the museum with actual people in it, and into the kids' temporary playground in which they most certainly were full of natural life.

natural history is available to purchase from the Austrian Film Museum on a DVD which also includes Benning's 2009 German film, Ruhr.