Above: The music video for "Suit & Tie".

The Monochrome isn't the first dedicated black & white sensor. Sweden's Ikonoskop introduced one—called, no joke, the A-Cam dll Panchromatic Carl Th. Dreyer Edition—last year. The Monochrome does, however, have the distinction of being 5K—about as high-end as you can get. It represents the cutting edge of anachronism.

Last year, the Academy Award for Best Picture went to a black & white film—The Artist. Additionally, at least five major 2012 arthouse releases were in black & white: Hong Sang-soo's The Day He Arrives, Guy Maddin’s Keyhole, Béla﻿ Tarr's The Turin Horse, Miguel Gomes' Tabu, and Alex Ross Perry's The Color Wheel; only the last three of these were actually shot on black & white film stock. There are at least four notable black & white releases this year: Noah Baumbach’s Frances Ha, Alexander Payne's Nebraska, Joss Whedon’s Much Ado About Nothing, and Andrew Bujalski’s Computer Chess—none of which were shot on film.1

Looking back at the most well-known black & white films of the last decade or so, you'll find very little traditional black & white filmmaking. Michael Haneke's The White Ribbon (2009) was shot on color stock and then desaturated into black & white, as were Luc Besson's Angela-A (2005), Anton Corbijn's Control (2007), George Clooney's Good Night, and Good Luck (2005), and the Coens' The Man Who Wasn't There (2001). The last of these was even released in color in certain territories.

Steven Soderbergh's "retro" exercise The Good German (2006) was shot on color stock as well, though unlike most contemporary black & white (or "black & white") films, its release prints were actually printed on black & white stock. Lav Diaz's films are shot in digital color and then desaturated; the same goes for Francis Ford Coppola's Tetro (2009).

One common complaint about The Artist was that silent movie-aping﻿ film doesn't actually "look" like a film from the 1920s. One reason (of many), was that it was shot on modern 500 ISO color stock, which is magnitudes more light-sensitive that anything available in the silent era. The same is true of Pablo Berger's recently-released Blancanieves—﻿a mock silent shot on Super 16mm. 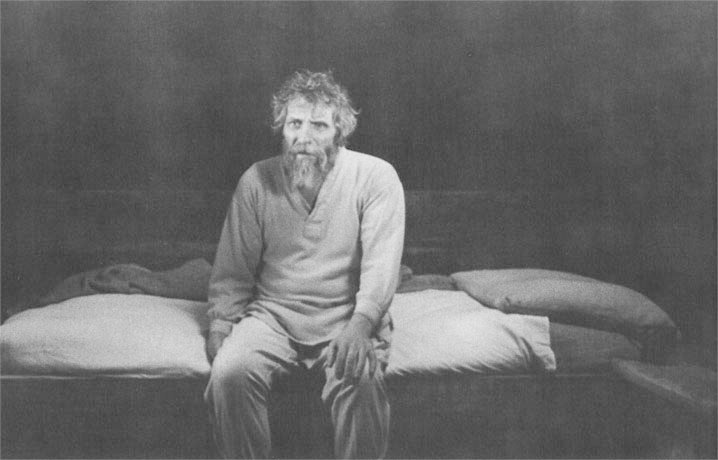 ﻿Above: The Turin Horse.

Even those the rare films that actually were originated on black & white film—﻿﻿﻿﻿like Tabu or The Color Wheel, both shot on 16mm Kodak stock—﻿﻿﻿﻿﻿have some kind of modern component.

A few days after "Suit & Tie" premiered, I e-mailed Alex Ross Perry, the director of The Color Wheel, to ask him what the workflow for his film was like. Perry explained that the footage—﻿﻿﻿﻿shot on Kodak's 7222 Double X 200T﻿ and the now-discontinued Plus X 64T2—﻿﻿﻿﻿﻿was first transferred to standard definition video for editing. After Perry had finished cutting the film on his computer, he had the footage re-scanned at 4K and then graded at Technicolor ("just to smooth things out and make all the blacks the same contrast of black﻿").

The one exception seems to be The Turin Horse, which was cut on a flatbed3—﻿﻿﻿﻿﻿﻿but then there's the issue of ORWO, the distinctive stock that plays such an important role in Tarr's image-making. Once a state-owned East German manufacturer, ORWO is one of a handful of companies around the world that only produce black & white stock. Their product—﻿low-contrast, light-sensitive—﻿is a modern black & white stock; it isn't designed to mimic the totemic qualities of "classical" black & white.

For many viewers and critics, black & white automatically situates a film within a formal-historical context, pulling ﻿﻿it out of its own era and placing it into a direct relationship with the cinema of the past. And while that's certainly part of the intention behind the use of black-and-white in films like Tabu, Raya Martin's Independencia, or Andrew Bujalski's Mutual Appreciation, it doesn't really encompass how the films use the format—﻿﻿nor does it touch on how formally "ahistorical" films like The Day He Arrives use it.

Trickier still are the movies like The Color Wheel and Computer Chess, which toe the line between using black & white as a point of reference and using it for its formal peculiarities—﻿its ability to create a stylized, half-real image with heightened shadows, textures, and contours.

All of this speaks to a problem that's common to any maturing medium: the interplay of the "new" and the referential.

Whether we like it or not, viewers tend to interpret formal gestures in terms of authorial intent. (Parodies are a good example: what seems stupid and amateurish in an earnest context becomes funny and clever when we think that it's being done mockingly.) In filmmaking—where brand new technologies often intermingle with century-old techniques—the question of what's meant to be original and what's meant to be a copy becomes blurred. This is further compound by the fact that cinema—like rock & roll—is founded on self-referentiality. No medium is as obsessed with its own existence.

This puts forward-thinking cinephiles in an odd spot; "fresh" and "retro" can often refer to the same film. One of the integral parts of any cycle of innovation involves rewriting history, latching on to older forms—black & white, the silent narrative, etc.—and pushing them into a modern context. Perhaps that's why some of freshest-feeling new movies—like Computer Chess—are also some of the most deliberately referential. In glomming on to the past, cinema reinvents and perpetuates itself.﻿

1. Computer Chess was, however, shot on 1970s tube-based video cameras, which are only capable of imaging in black & white.

2. ﻿﻿﻿﻿﻿﻿﻿Neither of these are very fast or grainy stocks. The distinctive graininess of The Color Wheel is the result of its "widescreen process." Instead of shooting on widescreen-ready Super 16mm (aspect ratio 1.67﻿), the film was shot on standard 16mm (aspect ratio 1.37). In editing, the top and bottom of the frame were removed to create a widescreen image.