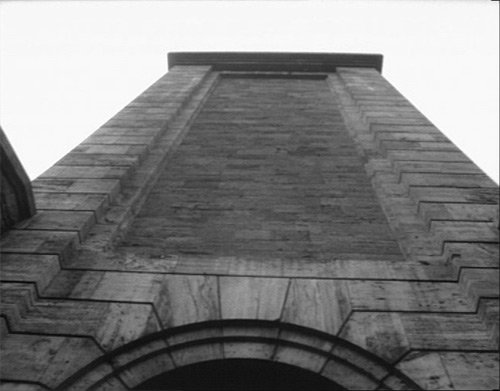 "Often he [Fritz Lang] would sit there in the country's penetrating sunlight under the merciful protection, so to speak, of his physical handicap.  He allowed the films that, to his regret, he had been unable to make, pass across his inner eye.  He had lost a lot of time through emigrating from Germany to France and later to the USA and then in attempting to return to Germany.  And now: waiting for death.  Without any commissions.  These significant periods of time he would have liked to fill with films he'd already planned.  He could describe them scene by scene.  For a short moment, still in Europe, Godard had listened to these descriptions.  For an afternoon, Godard was determined to film one of these outlines.  That never came to anything, however, because he was busy with his own projects." —Alexander Kluge, "The Blind Director"

During the late 1950s, Alexander Kluge served as an attorney for the Institute of Social Research in Frankfurt, Germany.  In particular, he represented Theodor Adorno and Max Horkheimer in their reparations claims against the State.  In his spare time, Kluge wrote stories; however, Adorno and Horkheimer advised him against doing so.  Adorno held the opinion that one can no longer write fiction after Marcel Proust.  Kluge later recounted their thoughts, "He [Kluge] is a first-rate lawyer, we like him and are friendly with him, but he just should not make films, and in no event should he write any stories." (1)

Nevertheless, due to Kluge's growing interest in filmmaking, Adorno introduced him to Fritz Lang in 1958, and Lang subsequently invited Kluge to join him as his assistant on the West Berlin set of his penultimate feature film project, The Tiger of Eschnapur and The Indian Tomb (both 1959).  Kluge maintained that Adorno helped him to get onto the set in order to discourage him from continuing to write stories.  If Lang turned him away, Adorno believed, Kluge would return to the Institute and resume his position as their attorney.  But he stayed on and recollected this first experience in filmmaking to be very depressing.  Kluge watched the postwar entrepreneur and producer Artur Brauner treat Lang with utter disrespect.  Brauner gave orders to the master director about how to shoot the films from the advice he took from his wife and her sister.  Kluge recalled, "Fritz Lang didn't even have control of the cameramen, the electricians, etc.  At his hotel he would receive a case of champagne but the film slipped more and more from his control."  It was on the set of Lang's "Indian Epic" that Kluge recognized "the necessity of a new politics for the cinema" and shortly after composed the Oberhausen Manifesto in 1962 outlining a New German Cinema. 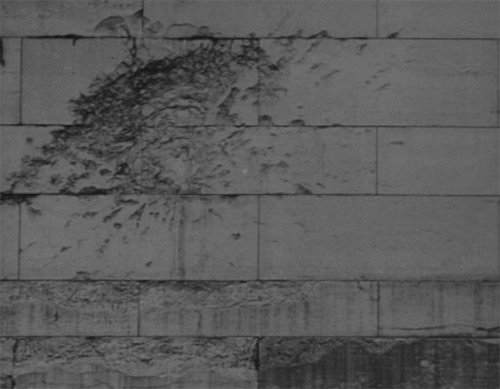 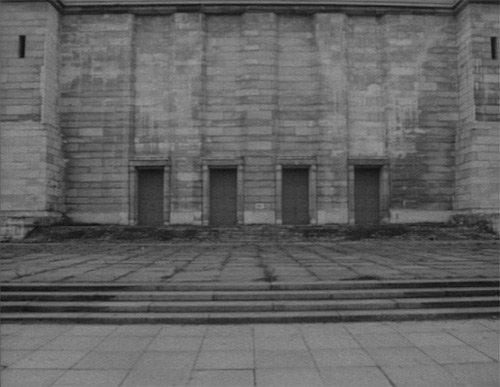 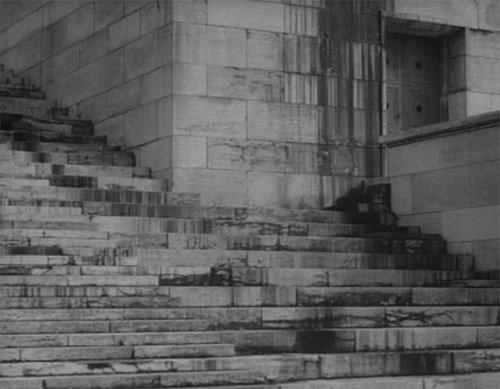 In These Walls of Theirs: Fritz Lang's Indian Epic, Daniel Kasman addressed Lang's focus on representing architectural space in his final feature films, bypassing the little control granted to him.  Interestingly, Kluge's first film, titled Brutality in Stone (1961) and shot only two years later, deals specifically with architecture, in particular the Nuremberg Rally Grounds, which served as the site of Nazi Party rallies and the set of Leni Riefenstahl's infamous Triumph of the Will (1935).  Brutality in Stone begins with the following intertitles: "Every structure left to us by history expresses the spirit of its builder even if later used for other purposes.  The abandoned buildings of the Nazi Party serve as witnesses in stone to a time that played host to the most terrible events in German history."  Amazingly, Kluge captures this terrible spirit in his short film of only twelve minutes.  In so doing, he sets in motion a lifelong obsession to understand Germany's contemporary relationship to its unspeakable past in all its guises, which he explores in films from Yesterday Girl (1966) to Germany in Autumn (1978) to The Patriot (1979). 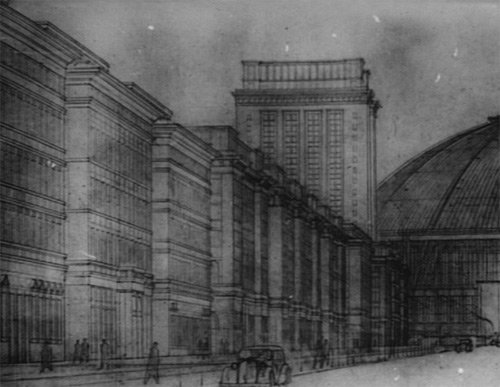 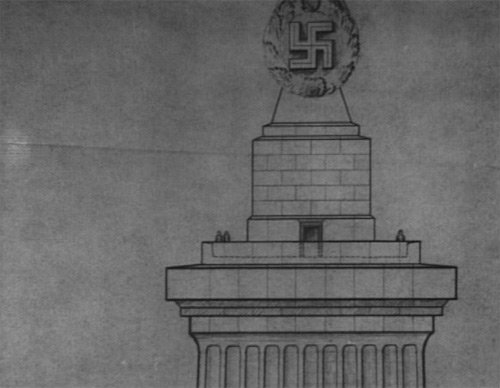 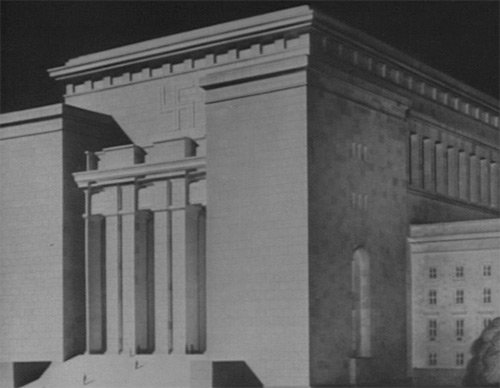 Shot in black and white, Brutality in Stone features the long abandoned Nuremberg Rally Grounds in 1961, the attendant buildings, and their motifs.  Not a single figure appears in Kluge's footage.  He does show images of German people from photographs and building plans dating back to the Third Reich, but they are dwarfed by the architectural monstrosities towering over them.  Sometimes set in time to a military drumbeat on the soundtrack, Kluge uses very quick cuts to momentarily reveal details of the grounds and its buildings.  Evidence of World War II's thorough destruction becomes apparent from the gaping holes in a building's façade to the heavy black soot coating its walls and stairs. 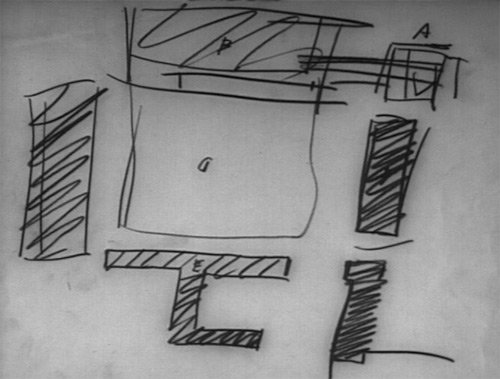 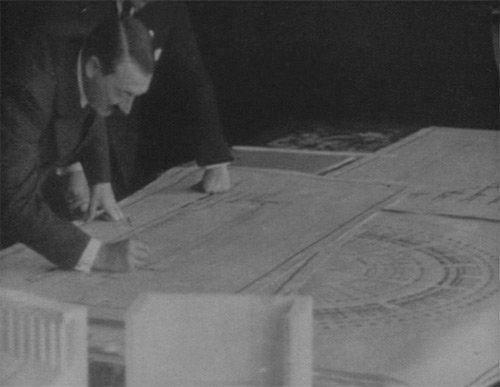 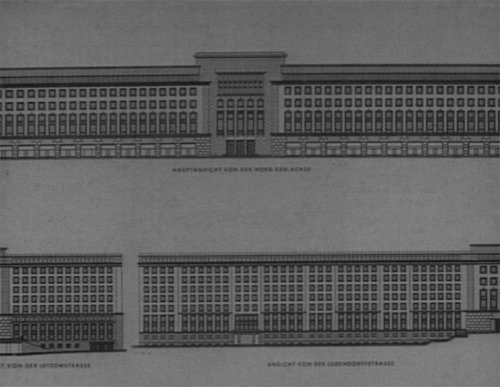 Kluge intersperses the film footage from the early 1960s with various images dating from 1933 to 1945, including photographs of Adolf Hitler drawing building plans, his personal sketches, and drawings of reconceived German cities.  Sound recordings of sirens and bombings overlay the latter drawings, indicating the vast amount of space cleared by the Allies dropping their bombs onto Germany and its cities, particularly Berlin.  Kluge also includes drawings of the future imagined by the Nazis and photographs of women in togas and men dressed as knights.  The Nazis pulled from ancient Greece and Rome in addition to the Middle Ages and perverted the ideas from those cultures to such an extent that they were nearly unrecognizable in a totalitarian incarnation.

Each of the film's images highlights the Nazis' compulsion to construct enormous edifices and monuments to their perceived power.  For instance, toward the beginning of the film, Kluge uses a speech by Hitler from a former rally in which he declares the revolution of German society to be a "gigantic construction," and he pairs it with images of the rally ground's buildings shot from the lowest possible angle.  After these shots, one hears Auschwitz Commandant Rudolf Hoss casually recount how the concentration camps were designed to kill Jewish men, women, and children.  As Hoss describes how the Jews entered a gas chamber in detail, the camera, decades later and through another Nazi building, tries to recreate the people's movement for the viewer.  This particular scene and the film as a whole emphasize how the construction of the Nazi ideology and culture as seen through the design of its architecture produced the unmitigated destruction of millions upon millions of human beings.  With Brutality in Stone as well as his feature films that would follow six years later, Kluge addressed the sins of Germany and relocated in New German Cinema that once vibrant avant-garde culture that flourished in the heyday of the Weimar Republic for men such as Fritz Lang.  Both Lang and the German filmmakers who came to prominence in the 1970s explored the various structures of their country's past, present, and future in great depth and provided us with the opportunity to try and make sense of what happened in the twentieth century.

Watch an English-subtitled version of Brutality in Stone below: