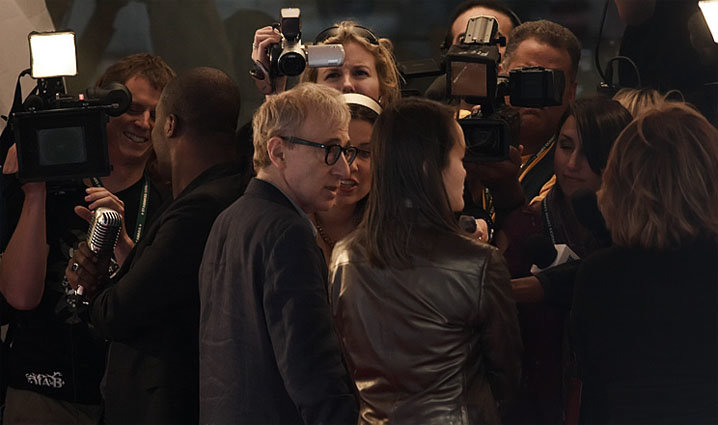 Back in September, Marc Maron was interviewing Judd Apatow for his WTF podcast and, about three quarters of the way through the two-hour conversation, asked him, more or less, to talk about some of the comedies that have been most important to him. Apatow briefly discusses a couple, then races through a list and, slipped in there, almost under his breath, is Annie Hall (which, incidentally, topped, as you may remember, the Guardian critics' list of the greatest comedies of all time just last month). After a bit of back and forth, Maron steers the conversation back to Woody Allen, who turns 75 today, and in less than three minutes, Apatow offers an impromptu analysis of the discomfort many of us who've admired and at times even loved Allen's films in the 70s, the 80s, and yes, much of the 90s now experience when trying to "place," as Glenn Kenny put it the other day, the man and the work. Give this a listen:

Now, of the many points Apatow and Maron hit on here, the one that would be the least interesting to rehash would be this business of deciding to what degree the artist and the art can or should be considered separately. What is interesting, though, in the case of Woody Allen, is the compulsion he evidently feels to separate himself from "the Woody Allen character," variations of which he's played as long as he's been making films; this insistence that he himself has no intellectual aspirations and that, after putting in a full day's work on the set, there's nothing he likes better than to come home, pop open a beer and watch a game. I won't presume to understand why he feels the need to draw that line so starkly, but I do think that it's perfectly fair to note that he does so over and again (watch, for example, Time's interview in 2008 or listen to Terry Gross's in 2009) — and with conspicuous frequency and conviction.

"To what extent is his stature a progressive factor in our film culture, and to what extent is it reactionary?" asked Jonathan Rosenbaum in 1990. "How much does his status as an intellectual filmmaker represent genuine intellectual inquiry, and how much does it suggest something closer to the reverse — a representation of intellectuals for nonintellectuals and even anti-intellectuals that serves to satisfy curiosity about intellectual concerns without any sort of intellectual challenge?" You can probably tell where he's going with this, and it's likely a place Allen never intended to go. Yes, Chaplin, Tati and Jerry Lewis are "profound social critics," but Rosenbaum himself argues that Allen's "task is to seduce us into sharing his character's confusions and ambivalences without being able to sort them out." Suppose, though, that Allen is actually demonstrating the courage of his convictions, namely, that his confusions and ambivalences cannot, in fact, be sorted out? Some might take that as intellectual honesty; others, perhaps like Joan Didion, as a sign of never having grown up (or so she argued in a 1979 piece for the New York Review of Books that recently made the rounds).

Back in April, Robert E Lauder asked Allen for Commonweal, "From the earliest days of your career as a stand-up comedian and filmmaker, you have dealt with philosophical and religious questions — the existence of God, life after death, the meaning of life. Can you remember when these questions first became important for you?"

Allen, almost as if he were answering Jonathan Rosenbaum as well: "These were always obsessions of mine, even as a very young child. These were things that interested me as the years went on. My friends were more preoccupied with social issues — issues such as abortion, racial discrimination, and Communism — and those issues just never caught my interest. Of course they mattered to me as a citizen to some degree... but they never really caught my attention artistically. I always felt that the problems of the world would never ever be solved until people came to terms with the deeper issues." And further into that interview: "I think I said it well at the end of Deconstructing Harry: we all know the same truth; our lives consist of how we choose to distort it, and that's it. Everybody knows how awful the world is and what a terrible situation it is and each person distorts it in a certain way that enables him to get through. Some people distort it with religious things. Some people distort it with sports, with money, with love, with art, and they all have their own nonsense about what makes it meaningful, and all but nothing makes it meaningful. These things definitely serve a certain function, but in the end they all fail to give life meaning and everyone goes to his grave in a meaningless way."

Clearly, this is a philosophy forged in the mid-20th century, and just as clearly, he's very serious about it, and even more clearly, his films are shot through with this plain (and here, plainspoken) existential terror. Not anger, but despair.

"How many fans of Sleeper would have guessed that 35 years later, Woody Allen would be directing a tempestuous melodrama set in Barcelona, with dialogue in Spanish?" asks Saul Austerlitz at the end of his chapter on Allen in Another Fine Mess: A History of American Film Comedy. "The conceit — neurotic Jewish intellectual from Manhattan exiled in the land of tapas and bullfighting — sounded like a New Yorker casual by Allen himself, but the juxtaposition was telling. Woody Allen had always been a walking contradiction: a comic with pretensions to philosophic eminence, a self-taught intellectual playing a stooge, a shlubby New York Jew who envisioned himself as a matinee idol. From gagman to stand-up comedian, from actor to director, from descendant of Groucho Marx and Bob Hope to appointed successor to Bergman and Fellini, Allen had grown in stature by embracing his restlessness." 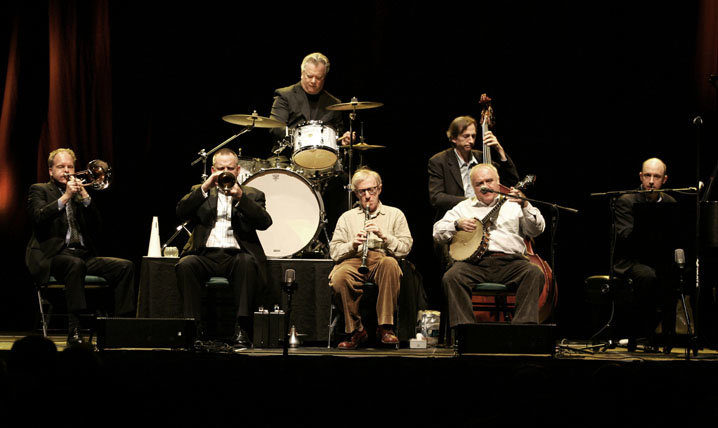 A few more reads for the occasion. First, an essay and a bit of listening at WFMU: "The Early Woody Allen 1952 - 1971." Stuart Hample in Guardian, "How I turned Woody Allen into a comic strip." Stacey Anderson in the Voice on Allen's commitment to traditional jazz. Last month, PopMatters spent a week considering the "Women of Woody Allen's Oeuvre." Viewing (2'01"). Steve Coogan and Rob Brydon do their Woody Allens.

Updates, 12/2: Danny Kasman's reminded me not only that all the Paris Review interviews are now online but also that Michiko Kakutani spoke with Allen in 1995. A snippet: "You really have to forget about what they call 'career moves.' You just do what you want to do for your own sense of your creative life. If no one else wants to see it, that's fine. Otherwise, you're in the business to please other people. When we did Stardust Memories, all of us knew there would be a lot of flack. But it wouldn't for a second stop me. I never thought, I better not do this because people will be upset. It'd be sheer death not to go through with a project you feel like going through with at the time. Look at someone like Strindberg — another person I've always loved — and you see the reaction he got on certain things... just brutalized. When I made Annie Hall, there were a lot of suggestions that I make Annie Hall II. It would never occur to me in a million years to do that. I was planning to do Interiors after that, and that's what I did. I don't think you can survive any other way."

"Unlike his fellow secular Jewish philosophical materialist, the late Irvin Kershner, perhaps a lesser talent but maybe a wiser man, [Allen] says bluntly that creative achievement hasn't brought him any satisfaction," notes Bob Westal at Premium Hollywood. "As he said so brilliantly a long time ago, he doesn't want to achieve immortality through his work, he wants to achieve it by not dying."