"Riding into Manhattan on a wave of Sundance and Cannes huzzahs," writes Nick Schager for the Voice, Sean Durkin's Martha Marcy May Marlene "attaches itself to damaged Martha (newcomer and sister to the twins Elizabeth Olsen), who flees an upstate New York cult run by John Hawkes's charismatically scruffy wannabe-Jim Jones for her estranged sister Lucy's (Sarah Paulson) Pottery Barn-catalog lakeside rental house, where her transition back into 'normal' society is complicated by traumatic flashbacks to her prior experiences as 'Marcy May' at the commune. Despite sterling performances by Olsen, Hawkes and Paulson, Martha Marcy May Marlene is a tale of psychological fracturing that's frustratingly upfront and blunt about its characters' states of mind as well as its critique of both its rural and bourgeoisie milieus. Durkin's on-the-nose script too often lacks genuine complication."

"As many a magazine feature will soon remind us," writes Andrew Tracy in Cinema Scope, "the real story here is not the filmmaker but his lead, and the untwinned Olsen is indeed a magnetic presence. Opaque, alert, and intelligent — which renders her regurgitation of the cult's buzz-worded, circular-reasoned maxims all the more chilling — she makes Martha's uncontrollable, slow-burn shifts from dour/charming teenageness to verbal and physical violence in the company of the uncomprehending Lisa and Ted unerringly, viscerally effective."

"What makes Olsen's cult experience so unnerving is that in many ways she's a better fit there than she is in Paulson's upper-class dream-world," observes Noel Murray. Adds fellow AV Clubber Scott Tobias: "Durkin, in a precociously assured debut, finds the perfect structure to reflect Olsen's state of agitation and disorientation, cutting back and forth in time with the associative daring of an early Nicolas Roeg film, but MMMM is much more precise than its freewheeling edits might suggest. (Durkin's debt to the cold hand of Michael Haneke is no less substantial than his producing partner Antonio Campos's Afterschool, but less apparent on the surface.)… Durkin leaves a lot to the audience… and that includes a masterful final shot that has (and will continue to) provoke some chatter."

"Some will read the film as a dream," predicts Sara Maria Vizcarrando at Box Office. "I disagree — that would dilute the film's intensity."

Oliver Lyttelton talks with Durkin for the Playlist.

Jen Yamato interviews Olsen for Movieline; Catherine Shoard does, too, for the Guardian, but on video (3'04").﻿ 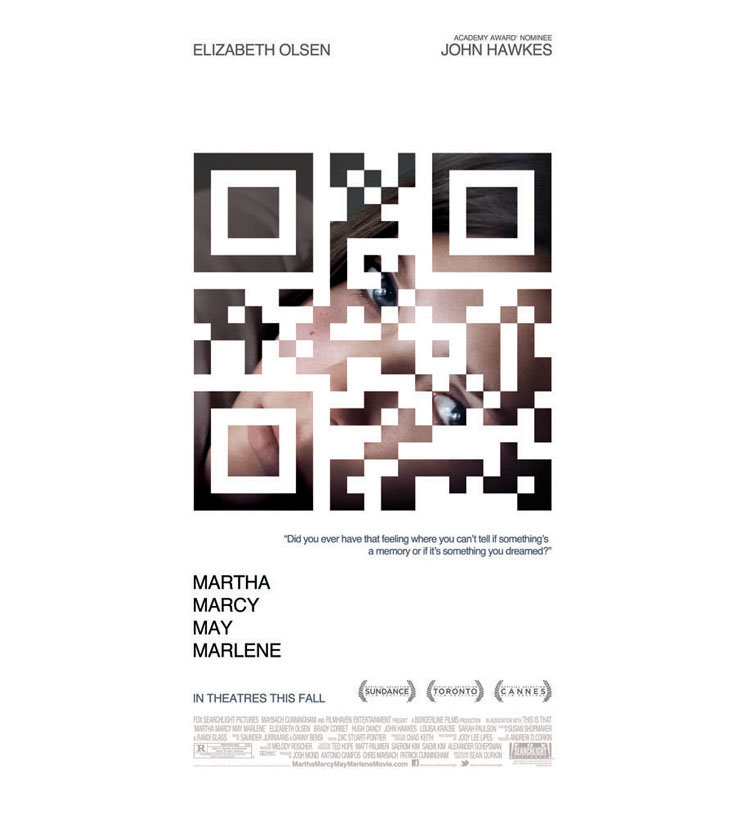 Updates, 10/11: "Right up to its creepy, ambiguous ending, Martha Marcy May Marlene is a tour-de-force of subjective experience, technically masterly," writes Henry Stewart for the L. "But the surface-level brilliance, and the story's narrow focus, also serve to keep the viewer at a remove — the movie's pretty chilling, in more ways than one."

For Jaime N Christley, writing in Slant, "nothing in the movie redeems the emptiness of Durkin's dueling-narrative gimmick. The violent crime that kicks off the film's dutifully ambiguous finale doesn't so much signal a change in the weather… as it seems to check off a box on the American independent film worksheet."

"Is it possible for a cinematographer to be considered an auteur even more than the directors for which he works?" asks Kenji Fujishima at the House Next Door. "On the basis of his work on films as disparate in subject matter, style and tone as Afterschool, Tiny Furniture, and now Martha Marcy May Marlene, one could make such a case for Jody Lee Lipes, the phenomenally talented 29-year-old cinematographer who shot all three of them."

Updates, 10/15: "Like Jeff Nichols's Take Shelter — its only real rival for the title of Fall's Best American Film — Sean Durkin's Martha Marcy May Marlene concludes on a shot that's either totally declarative or sneakily ambiguous," writes Adam Nayman at Reverse Shot. "In both cases, it's up to the viewer to decide whether the filmmaker has placed all of his cards on the table or is still holding a couple close to the vest. The comparisons between the two films don't end there, either. While largely dissimilar in terms of style and subject matter, Take Shelter and Martha Marcy May Marlene are movies that warily examine gender roles — flipped mirror images of characters looking for a way out to find themselves ever more tightly constricted."

Vadim Rizov at GreenCine Daily: "Martha and Lucy may be cartoon stand-ins individually, but together they're two sides of a film that works both as an understatedly terrifying portrait of a communal cult and a portrait of the vapid world its members escaped from."﻿

Updates, 10/17: "Like Haneke, Durkin — remarkably, making his first feature — specializes not in apocalyptic grandeur but in the creak and the tinkle of the uncanny," writes Anthony Lane in the New Yorker.﻿

Updates, 10/19: "Typically match-cutting images of deep, still water from the two different locales, Martha Marcy is full of foreboding," writes J Hoberman. "The spare, angsty score by Saunder Jurriaans and Danny Bensi is as ominous as distant thunder…. Martha Marcy is purposefully abstract, sharing a certain coolness with the similarly performance-driven youth shocker Afterschool, produced by the same group of youthful NYU grads, along with a similarly studied, Bergmanesque interest in psychological states." Also in the Voice, Seth Colter Wells talks with Durkin.

"Durkin doesn't condescend to the character he's written, and in return, Olsen rises to the challenge of that character," writes Stephanie Zacharek at Movieline. "As Martha, Olsen throws off a muted self-assurance that reads as a kind of charisma. We fear for her every minute, and yet for better or worse, we'd follow her anywhere."

"A lesser movie might hammer home the idea that the cult squashes Martha's sense of self," adds Keith Uhlich at Time Out New York. "This distinctive and haunting effort implies something much scarier: that there is no self to start with."

Updates, 10/20: "About halfway through," writes Noel Murray at the AV Club, "the possibly crazy Elizabeth Olsen asks her uptight sister Sarah Paulson if she's ever had trouble telling the difference between a dream and a memory. Paulson says no, but anyone who has ever had that trouble will likely be extra-shaken by what happens next, and by Martha Marcy May Marlene as a whole."

Filmmaker's Scott Macaulay introduces the following video in which Durkin talks about "Altman, Polanski and why he's fascinated by cults; Elizabeth Olsen on her character, scripts, and what attracted her to this part; and John Hawkes on why his cult leader wasn't another dark creepy dude. Photographed by Jamie Stuart, edited by Daniel James Scott and with music by T. Griffin. Shot at Sundance 2011."﻿

Updates, 10/21: "Mr Durkin conveys Martha's dissociation by means of a number of compositional and formal strategies," writes AO Scott in the New York Times. "He shoots Ms Olsen in off-center close-ups, and frequently induces confusion for the viewer at the beginning of a scene, about where it is taking place. Are we back at Patrick's farm, or at home with Ted and Lucy? After a while this technique starts to seem like a trick, and the ingenuity of the movie's structure begins to feel evasive rather than probing. The drama is all in the jumps and juxtapositions, rather than in any sustained consideration of Martha's experience." Ultimately, he finds the film "a bit too coy, too clever and too diffident to believe in."

"The problem with this would-be study of a Manson-like cult and its effect on the life of a mentally unstable woman is that the final result (especially, but not exclusively, the ending) is too elliptical," agrees Dana Stevens at Slate. "It's one thing for a work of art to ambiguously reveal depths of emotion and meaning; it's something else again to dangle the promise of meaning that never arrives."

"Durkin seems to be aiming for a Hitchcock-style thriller that has the unsettling psychological and narrative ambiguity of, say, Michael Haneke's films, with an ending you can read in many different ways," writes Salon's Andrew O'Hehir. "If he doesn't quite get there, it's still a remarkable feature-directing debut."

"By design, Martha Marcy May Marlene is less a film of ideas than an adroit use of film language and performance to track the breakdown of a sense of self that may have been wobbly to start with," writes Ella Taylor for NPR. "Durkin may not have much that's new to say about cult leaders or their prey, but in his first feature he has groomed a new indie queen — unless Hollywood gobbles her up first."

Today's interview with Durkin: Michael Tully at Hammer to Nail; and Jen Yamato talks with Olsen for Movieline, while Todd Gilchrist meets Hawkes for the Playlist.

Updates, 10/22: "It's a real mesmeriser, casting an opiate spell from its first frame to its last," writes Tom Shone.

"The filmmakers are especially adept at the startling use of water imagery," notes Patrick Z McGavin. "Normally a symbol of cleansing and re-birth, in Martha's distracted and angry condition, it marks a particularly grungy form of violation. With its recurring use of recovered memories, water provides a propulsive sense of plunge and downward movement."

"Durkin shoots the lake house and farm to look almost identical, which often makes us feel as disoriented as Martha," adds IFC's Matt Singer. "It's just one of the many ways Durkin and his editor, Zachary Stuart-Pontier, put us inside their heroine's tortured headspace."

For Halim Cillov, writing at Cinespect, this is "one of the most outstanding and haunting films of this year."