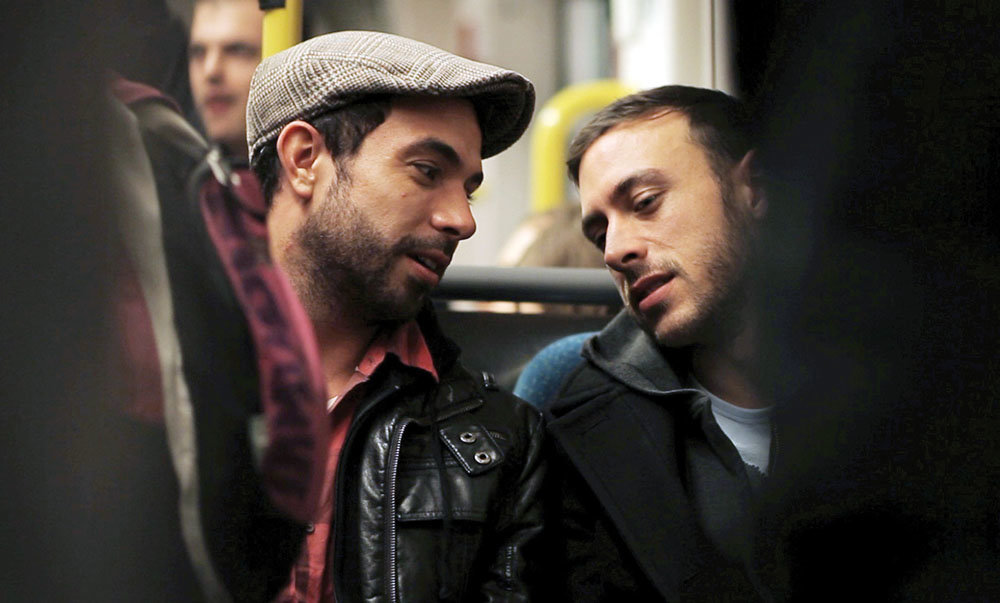 "Most romantic movies are so determined to chart the course of a love story — how boy meets girl leads to happily or unhappily ever after — that they miss the intensity and import of beginnings," writes Dennis Lim. "But the new British film Weekend, like its closest American predecessor Before Sunrise, lingers on the initial sparks of an erotic and emotional connection. As a one-night stand turns into something more, the film explores the notion that to meet someone new, not least a potential partner, is also to rethink who you are, an invitation to shape and refine the self you wish to project. A story about falling in love that is also a tale of identity and self-definition, it is perhaps all the more resonant for taking place between two gay men."

Also in the New York Times, AO Scott argues that in the wake of recent comedies such as No Strings Attached and Friends with Benefits, which "strain to adapt the ethics of the modern bedroom to tidy and traditional marriage plots," there's "a need for stories that address the complex entanglements of love and sex honestly, without sentiment or cynicism and with the appropriate mixture of humor, sympathy and erotic heat. Weekend, Andrew Haigh's astonishingly self-assured, unassumingly profound second feature, is just such a film. In its matter-of-fact, tightly focused observation of two young men who find their one-night stand growing into something more serious, the movie ranges over vast, often neglected regions of 21st-century life. It is about the paradoxes and puzzlements of gay identity in a post-identity-politics era, and also about the enduring mystery of sexual attraction and its consequences."

Reverse Shot co-editor Michael Koresky and his boyfriend found themselves debating the question of whether or not Weekend seems dated. "Did its poignantly dramatized questions regarding sexuality remain relevant in this allegedly 'post-gay' world?… We finally realized, and mostly agreed, that the issues (if that's the right word) that Weekend raises around homosexual identification, both externally and internally, remain largely unchanged in the past few decades, regardless of any political strides made. This is because the political is most certainly personal in Weekend, which speaks eloquently to today's experience with an intimacy that transcends era. Moreover, as a specifically British film, it speaks to a particular experience of difference in the new Europe. Its protagonist, Russell (Tom Cullen) and his bar pickup, Glen (Chris New), live in an evidently working-class suburb of Nottingham, marked by low-rent high rises and drab public spaces of sparse grass and abundant concrete…. As evidenced in his first feature, 2009's Greek Pete, a penetrating docudrama about a British rent boy, Haigh has an innate talent for knowing where to put the camera to capture the beauties and anxieties surrounding sex; Weekend takes it further, using sex as a springboard for a study of grace under social pressure."

"The quintessential tenet of romantic movies is that they feature characters who are either kept apart by their own deceptions or brought together by their total, yielding allowance of casting aside all that bullshit and opening up to another kindred soul." Eric Henderson in Slant: "If this seems especially true in gay relationships, and I'm not saying it actually is, then it's a mark of progress that the otherwise wholly naturalistic British drama Weekend chooses to embrace the fiction, especially given just how many other beacons of gay cinema opt to convey truth vis-à-vis the sorts of things we've been force-fed to accept as our reality (i.e. the pain of oppression, the tragedy of AIDS, the shallow escapism of candied softcore fantasies). Writer-director Andrew Haigh's sensitive, unfailingly aware feature isn't a fearless repudiation of the 'meet cute' archetype, but rather a bold, specific revision: 'meet right.'"

At the AV Club, Alison Willmore notes that Haigh "has cited mumblecore as an inspiration for Weekend, which offers an interesting view on that Amerindie sort-of genre. While shot in a naturalistic style with plenty of fluid camerawork, Weekend never looks like a mumblecore movie; it seems deliberately constructed, its dialogue is realistic in what doesn't appear to be an improvised fashion, and the production values are far sleeker overall. (Cinematographer Urszula Pontikos finds unfussy beauty in the everyday here.) The few similarities are thematic, suggesting that the legacy of the mumblecore mini-movement may not be how the films were made, but their content—the constricted timeline, the groundedness, the unhurried emphasis on believable conversation."

Update, 9/26: Michael Tully talks with Haigh at Hammer to Nail.