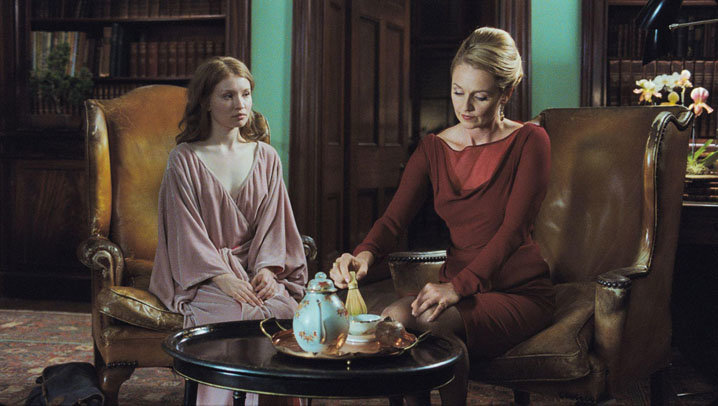 "'Your vagina will not be penetrated. Your vagina is a temple.' With these words, Sleeping Beauty establishes the ground rules and sets the scene for a bizarre sexual nightmare." The Guardian's Peter Bradshaw: "It is technically elegant, with vehemence and control, though often preposterous, with the imagined classiness of high-end prostitution and art-porn cliches of secret sexiness in grand chateaux: shades of Eyes Wide Shut. Author-turned-director Julia Leigh has certainly made an assured debut, which evidently owes nothing to Jane Campion who has 'presented' this movie in some kind of Executive Mentor capacity. Instead, Leigh aims for the occult ritual of Buñuel and the formal exactitude of Haneke: rigorously framed and composed shots."

"[I]n telling the story of a girl falling into the most eerily art-directed prostitution ring this side of a Freemason hazing ceremony, Leigh's way revisionist fairytale bluntly points out the ways in which our society has over-designed sexual experience even as it has undervalued raw human contact," writes Guy Lodge at In Contention. "Everything You Always Wanted To Know About Sex, But Were Afraid to Touch might have been a more specific title…. Perrault's Sleeping Beauty needed only a kiss to retrieve her from indefinite slumber; in Julia Leigh's exciting, upsetting, only occasionally over-determined debut, such simple intimacy seems light years away."

In the Hollywood Reporter, David Rooney concedes that, "while this psychosexual twaddle will no doubt have its admirers, it seems a long shot to attract a significant following or herald the arrival of a director to watch…. Leigh acknowledges novellas by Yasunari Kawabata and Gabriel García Marquez as loose starting points, but Georges Bataille also comes to mind, as do films from Belle de jour to" — again — "Eyes Wide Shut. It almost feels like one of those middle-class gutter odysseys to which Isabelle Huppert might have lent her commanding intensity a decade or so ago."

"Leigh instills a pristine antiseptic symmetry to almost every sequence, using static medium shots to put the process of domination on display." Glenn Heath Jr at the House Next Door: "The camera only moves when Lucy's role in these parlor games forces her to. During some of the more incendiary moments of female subjugation, Leigh lingers on what these images reveal about the older male characters in the film: weakness, impotence, and guilt. There's a particularly devastating monologue midway through the film that showcases Leigh's talent for uprooting conventions about mental and physical prowess. That Lucy inevitably becomes just as obsessed with the machinations of dominance as her employers shows that Leigh wants to make a universal statement, not one that's gender-specific."

"Like Soderbergh's The Girlfriend Experience, Sleeping Beauty is ostensibly about sex and control — but is really about work and wages," writes James Rocchi for the Playlist. "In many ways, Lucy is a long-lost (and not especially eager to be found) cousin to Maggie Gyllenhaal's Lee in Secretary, a young woman exercising an ultimate degree of control by willingly giving all control over to others, a person seeking self-assertion through self-negation. But as Lucy gets promoted — and as Leigh lingers perhaps too long on her new duties, making for scenes that are somehow both unspeakable and tedious — the film slides into a repetitive, small-scale groove, and Lucy's earlier spark fizzles into apathy, and transforms from a journey with the dark and disquieting power of, say, The Story of O to a slacker, smaller version of the same you could just as well call The Story of Oh, Whatever."

"Known for her 1999 novel The Hunter, in which a female character was also drawn to the healing qualities of drugged sleep, Leigh is economical in her brushstrokes, presenting university student Lucy as a puzzle the audience is drawn to solve," writes Fionnuala Halligan for Screen. But she finds the film "airless, frequently lifeless."

For HitFix's Drew McWeeney, "this is a museum piece, mounted on a wall behind glass, able to be seen but never felt, a cold film about heated things, fascinating but flawed."

Matt Bochenski for Little White Lies: "Spare a thought for [Emily] Browning, who's made a genuinely bold choice here to move way beyond the Hollywood roles that beckoned her and make a raw, aggressive and physically naked statement about the kind of actress she wants to be. Right decision; wrong film."

"Browning," writes indieWIRE's Eric Kohn, "up until this point mainly known for her roles in Lemony Snicket's A Series of Unfortunate Events and Sucker Punch, proves herself capable of far subtler, disquietingly mature material here. She manages to sustain the story through its drier moments."

Micropsia is gathering ratings from various corners of the lost continent of cinephilia.

Updates: For Simon Abrams, sending a dispatch to the L, "Leigh has knocked one out of the park with Sleeping Beauty, an incredibly dense and astonishingly precise drama about the demystification of sex, which Leigh treats presents as the ultimate mystery."

Charles H Meyer for Cinespect: "Although both Sleeping Beauty and Sucker Punch are violently kinky to the point of at times being hard to watch, [Zack] Snyder's film has all the erotic sophistication of an eighth-grade boy's secret sketch pad, while Leigh's complexly depicts — albeit in heightened, dramatic fashion — a very real form of paraphilia known as 'Sleeping Beauty Syndrome,' which, not unlike necrophilia, requires its object of affection to be completely unconscious. Watching a series of morbidly moribund lechers fondle Lucy's naked body, each in a different manner… we feel a combination of concern for her and pity for her clients, who are so impotent and old that only her unconsciousness enables them to feel any sense of power over her at all, while they subsume her youth and attempt to transcend their unavoidable deaths by projecting themselves onto her body."

The Festival has quotes and audio from the press conference.

"I can think of few first-time directors who've demonstrated such a keen understanding of how to create and build a visual rhythm, both from shot to shot and from scene to scene," writes Mike D'Angelo at the AV Club. "At the same time, however, she's created a character study of someone who's opaque to the point of incomprehensibility. Browning's actions are never less than compelling, but she comes across as more of a conceit than a person — and even that conceit seems like something of an empty provocation, entirely divorced from real-world behavior."

"Browning's performance is utterly fearless, suffused with mystery, cold as ice," writes the Telegraph's Sukhdev Sandhu. "Leigh's spare screenplay trusts the audience to fill in the imaginative spaces, and her framing is precise and economical. Fast-rising composer Ben Frost contributes a potent score. What a strange, ensnaring achievement, not least for a first-time feature, Sleeping Beauty is: no male director could have made it."

Salon's Andrew O'Hehir finds Sleeping Beauty "gorgeous, opaque and disturbing in roughly equal portions, but it was a riveting experience all the way through."

For Geoff Andrew, writing in Time Out London, "if it weren’t for the strong, brave, subtly nuanced lead performance by Browning, it might be difficult sustaining one’s interest in a protagonist so emotionally passive." Ultimately, Sleeping Beauty "promises more than it delivers. But one awaits Leigh’s second feature with interest."

"Leigh's arty (not to be confused with artistic) treatment of such provocative subject matter derives from her own 2008 Black List-blessed screenplay, though the film's frustratingly elliptical style and lack of character insight give it a distinctly first-draft feel," finds Variety's Peter Debruge.

"Leigh's elliptical narrative plays a teasing game," writes Jonathan Romney for the London Review. "[J]ust when you think the sleeping Lucy is about to be debauched, one of the roués turns to camera and spends five minutes recounting what turns out to be a short story by Ingeborg Bachmann. I doubt we'll see a more abrupt and wilfully frustrating ending all festival." 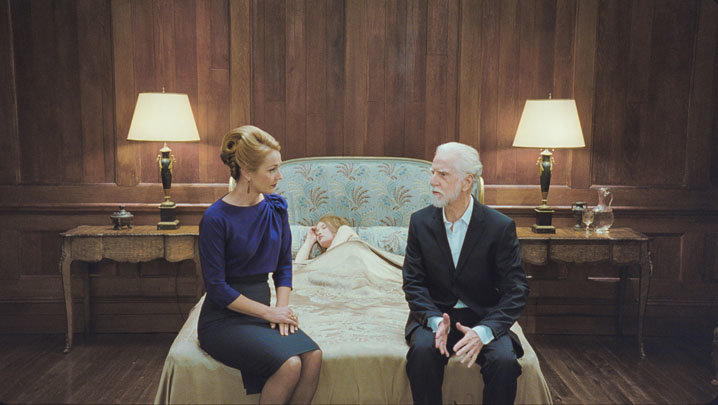 Updates, 5/14: "Already proving divisive but also one of the most talked-about films appearing in Cannes' main competition, this mysterious and technically graceful descent into the rabbit hole of radically fetishized prostitution is intellectually titillating but creepily, resolutely unnerving in its anti-eroticism," writes Aaron Hillis for Moving Pictures. "Early detractors seem to be put off by the detached, trapped-under-amber qualities that don't allow us to relate to the humanity as nakedly as Browning's boyish frame is depicted. That seems a minor quibble for an undeniably artful presentation of a dark and heady conceit, especially one that even some naysayers admit gets right under your skin. The most superficial compliment to be paid, but an important one all the same, is that it'll be exciting to see what Leigh does next."

"Perhaps because the character of this barbiturate Barbarella was so tediously underwritten (while most of the North American press was in its own jet-lagged trance state), Sleeping Beauty seems to have sunk like a stone," notes the Voice's J Hoberman.

Updates, 5/15: "Okay," grants Time Out New York's David Fear, "so maybe a dinner party scene featuring some black-clad extras from old Robert Palmer videos edges toward kink-aesthetic overkill, and the combo of Leigh's stark, subzero formalism and Browning's numbed performance had some critics slinging accusations of academic cinema-by-numbers. Just because she's equating capitalism with spiritual death and exploiting female sexuality doesn't make this a term paper; the cri de coeur that ends this drama is as emotionally anguished as you're likely to hear."

Update, 5/18: For the Voice's Karina Longworth, "Leigh milks a single bad joke of an idea — a girl happily cashes in on her lack of consciousness via unconsciousness — into sub-Skinemax drivel."