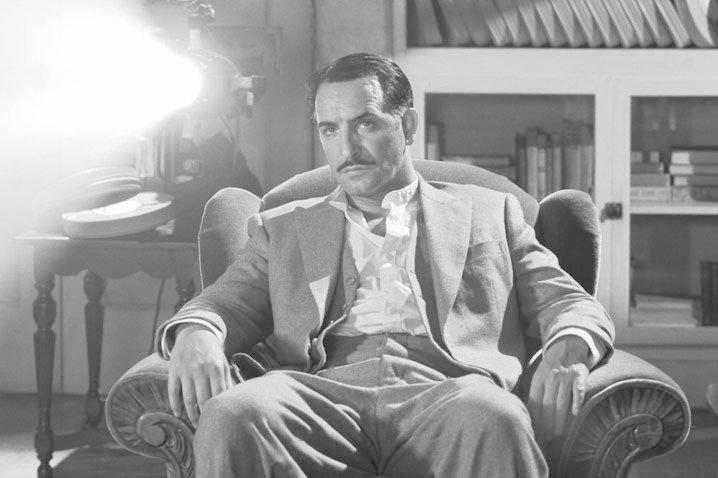 Salon's Andrew O'Hehir: "One of the first films to be picked up for American distribution out of the main competition here this year has the following qualities: It's French, and unless you're a fan of Gallic comedy, and specifically the recent OSS 117 spy spoofs, you've never heard of either its star or its director. It's in black-and-white. It's not merely a silent film but one that both imitates and spoofs the Silent Age dramas of the late 1920s, movies that relatively few living people have even seen. That's at least three strikes — if not four or five — against The Artist, an exceedingly weird and delightful new film from writer-director Michel Hazanavicius that premiered on Sunday in Cannes to a rapturous, uproarious reception."

"For the first half-hour I suspected The Artist would end up being nothing more than a flaky, if enjoyable, gewgaw," writes Movieline's Stephanie Zacharek. "But by the end, I was struck by how disciplined it is. Shot by Guillame Schiffman, the picture throws off a satiny moonlight glow." Hazanavicius "keeps a sure grip on the picture's tone" and, towards the end, "gives us a dance sequence rendered in long, glorious takes. No crazy cutting to make the steps look more 'exciting'; no close-ups of the feet to show us how fast they're moving. I had pretty much given up hope that filmmakers knew how to do that sort of thing anymore."

"George Valentin (Jean Dujardin) is a titanic personality, hamming it up in adventure films and real life with equal measure," writes Glenn Heath Jr at the House Next Door. "Despite his endless charisma, George's eyes reveal hints of loneliness, further confirmed during a Citizen Kane-esque montage of cold-shouldered breakfasts with his wife (Penelope Ann Miller). Always accompanied by a tenacious Boston terrier, his co-star in all situations, George bumps into an aspiring young actress named Peppy Miller (Bérénice Bejo) while leaving a packed theater premiere. Their initial meeting spins into a feature-length flirtation of knowing glances, charming asides, and fateful disappointments, a dual character arc that aligns with the technological changes taking place in cinema."

"The Artist is yet another variation on A Star is Born, a chestnut so frequently filmed (and unofficially remade) as to have entered the public domain," notes Guy Lodge at In Contention. "In this read on the tale, the man's demise is less induced by self-destructive instincts and more a passive consequence of external shifts; that Valentin's gifts as a silent performer are no longer prized in an entertainment industry fixated on the new makes the film something of a companion piece to another recent valentine to left-behind art, Sylvain Chomet's The Illusionist."

For Barbara Scharres, blogging for the Chicago Sun-Times, the "problem with this pastiche is that the genuine silent cinema was so much better. Silent-era actors were more than talking figures with the sound turned off, and silent cinema developed a whole visual language of communication that The Artist lacks. The novelty of its silence wears off quickly."

"On its surface, The Artist is a simple romantic comedy with lavish production values and a charmingly lighthearted plot," writes indieWIRE's Eric Kohn. "But that’s also its chief flaw: The Artist is all surface. Although easy on the eyes, it indulges in homage with no less gratuity than the references of Quentin Tarantino script. If the script had spoken dialogue in place of its anachronistic cue cards, it would be a relentless bore. The gimmick saves it, but just barely."

Time Out London's Dave Calhoun disagrees: "Feature-length, knowing recreations of past genres can often be tiresome after the initial novelty has worn off, and yet The Artist manages to keep up the same level of charm as its lead actor, Dujardin, throughout. Best of all, The Artist never feels like a parody or a good idea that becomes laborious in the execution. It's lovingly corny, great fun, good-looking and respectful."

The Hollywood Reporter's Todd McCarthy grants points to both sides: "Although everything in both the films-within-a-film and the 'real' movie looks a bit too crisp and clean, lacking the soft focus close-ups so prevalent at the time, Hazanavicius and his key collaborators — cinematographer Guillaume Schiffman and American production designer Laurence Bennett and costume designer Mark Bridges — succeed in the important matter of approximating the general spirit and flavor of some late silent pictures, notably their energy, brio and direct emotional appeal. Similarly, Ludovic Bource's continuous score may be more elaborate and ambitious than the orchestral music that normally accompanied major silent features in big city engagements, but its vigor and imagination provide The Artist with a crucial boost that amplifies its numerous mood swings."

"Wildly entertaining, with a big generous heart, The Artist is not just an exercise in old school filmmaking, it's a beautifully told story that is classic and timeless in feel," writes the Playlist's Kevin Jagernauth.

"John Goodman has real presence as the flustered studio executive, while James Cromwell is suitably stoical as George's loyal driver," writes Screen's Mark Adams. "Missi Pyle has a nicely judged cameo as a blonde silent star unable to make the transition to talkies — in a role rather similar to Jean Hagen's as Lina Lomont in Singin' in the Rain. The film, though, comes close to being stolen by the wonderful canine antics of George's loyal Jack Russell companion Jack (real name Uggy)."

"In a way, the medium is in similar transition today, as such sincere, emotional stories are forced to compete with digital spectacle and 3D extravaganzas," notes Variety's Peter Debruge.

"But the biggest point to make about The Artist is this," insists Charles Ealy at the Austin Movie Blog. "It should reinvigorate interest in the classic silent movies of Hollywood. It's just a bit odd that the French had to lead the way."

The grades at Micropsia are average just under 6 out of 10.

Update: "The Artist works beautifully so long as it remains a comedy," writes Mike D'Angelo at the AV Club. "For some reason, however, Hazanavicius decides midway through to switch over to A Star Is Born, and melodrama (silent or otherwise) clearly isn't his forte. Our affection for the characters remains constant, but the laughs gradually dry up, and complex emotions are not forthcoming; when Ludovic Bource's original, period-appropriate score is suddenly replaced at the climax by Bernard Herrmann's magnificent love theme from Vertigo, the gulf between sound and image becomes almost pathetic."

In a dispatch to Vulture, Jada Yuan notes that "at a press screening yesterday afternoon, the audience clapped for at least three minutes, and no one from the movie was there. Later that night, the gala premiere ended with a standing ovation that lasted, according to estimates, anywhere from twelve to twenty minutes…. Like Avatar, this isn't a movie you're going to want to pirate and watch in low resolution on your computer at home. And like Black Swan, this is a movie you're going to want to see immediately so as not to miss out on the cultural discourse."

"I don't just love this film, I adore it," declares Alex Billington, giving it a 10 out of 10 score at FirstShowing.

Updates, 5/17: "Dujardin's cat-that-got-the-cream smirk and his sleek good looks suggest not merely the Gene Kelly of Singin' in the Rain, but Maurice Chevalier." The Guardian's Peter Bradshaw: "The happy ending had me on my feet cheering throughout the final credits. I can't wait to see it again."

"Dujardin is reminiscent of Fredric March or John Gilbert," finds Domenico La Porta at Cineuropa. "The popular actor has a 'vintage' face that he manipulates with great skill. For her part, Bejo is physically very dynamic, which is especially useful in the dance scenes on which the duo worked tirelessly. The results pay off onscreen and this film couple just radiates chemistry."

Kenneth Turan talks with Hazanavicius for the Los Angeles Times.

The Telegraph's Sukhdev Sandhu: "By the end, it's all you can do not to cheer on the seemingly star-crossed lovers and not to sigh about how they don't make films like this anymore. Except, of course, Hazanavicius just has."

Update, 5/18: 5 out of 5 stars from Geoffrey Macnab in the Independent.

Update, 5/21: "As a formal stunt," the Voice/LA Weekly's Karina Longworth finds that it "'works,' in that it adapts some basic tenets of pre-talkie visual storytelling to suit a modern gaze. But since there's little here other than form — director Michel Hazanavicius has nothing to say about the massive transition at the dawn of sound other than that it happened — that process of adaptation feels like a cheat."

Writing for Time, Mary Corliss heartily disagrees. This is "the fizziest, most endearing film in ages" and it's "not just for geriatric cinephiles — geezers pleased that someone besides Mel Brooks has made a Silent Movie — but for anyone of any age who wonders what happened to the cinema's old gift for creating pure joy."