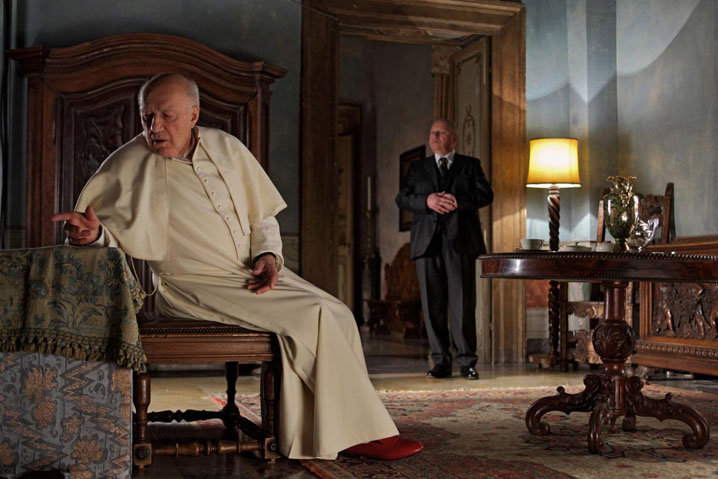 "Nanni Moretti's Habemus Papam (We Have a Pope), the Italian filmmaker's sombre and lightly amusing reconstruction of life behind the closed doors of the Vatican after the election of a reluctant Pope, can't decide whether it's a drama or a comedy, a satire or an affectionate critique," finds Time Out London's Dave Calhoun. "It's gently funny at times and occasionally thoughtful, but overall it's too limp and non-committal to satisfy or be persuasive as any of the above. Luckily, veteran French actor Michel Piccoli as the Pontiff in meltdown is a pleasure to watch even when Moretti's script is unsure what to do with him."

"Piccoli plays the Cardinal who starts out composed and contemplative, but soon becomes a screaming Pope afflicted with performance anxiety," explains the Telegraph's Sukhdev Sandhu. "A psychoanalyst (Moretti) is brought in to help, but it’s difficult for the two to communicate when there are so many Vatican officials listening in, and when his usual opening gambits of sex, desire and unfulfilled fantasies are off-limits. Outside the palace, in Saint Peter’s Square, tens of thousands of Catholics are eager to hear from their leader; inside, behind stage as it were, cardinals from around the world plays cards and work out on exercise bicycles."

"The biggest sin here isn't the cutesy, unoriginal take on the upper echelons of clerical life," finds Variety's Jay Weissberg, "but rather an inability to balance mildly amusing scenes, which seem tailored for a jokey trailer, with the anguish of a man unprepared for the responsibility of ascending St Peter's throne. The results veer between occasional smiles and outright pretension, with only Piccoli's mastery transcending the material."

IndieWIRE's Eric Kohn finds the film "stuck somewhere between religious satire and an earnest look at a crisis of faith…. Intermittently amusing, the movie never digs deep enough to justify its philosophical connotations, and lacks enough comic inspiration to sustain its lighter ingredients."

The Hollywood Reporter's Deborah Young predicts that "fans of Moretti, the political activist and beacon of uncomfortable truths, will wonder where he left the mordant, oft-times savage humor and fierce political satire of Mass Is Over and his Silvio Berlusconi send-up, The Caiman. Here the storyteller overpowers the moralist in every sense. Not a hint of clerical sex scandals clouds the surreal image of frolicking white-haired Cardinals; the most critical line in the film suggests the Church needs a leader who will bring great change, but even that plays as an offhand remark. Those looking for a probing study of religious faith, in the vein of Marco Bellocchio's The Religion Hour/His Mother's Smile, are knocking on the wrong church door."

Micropsia's gathering grades and the Festival has quotes and audio from the press conference.

Updates: "The big problem with Habemus Papum is that Piccoli (historically a wonderful and charming performer) just looks shell-shocked every minute," argues Movieline's Stephanie Zacharek. "There's no texture to the performance. The zonked expression on his face is the same in every sequence: He looks as if he's pondering which cardigan to wear to the big bocce tournament."

Melissa Anderson for Artforum: "Only in the final minutes of Habemus Papam does Moretti acknowledge, ever so discreetly, the enormous crises facing the Catholic church. We have a papam; we also have pap."

But the Guardian's Andrew Pulver argues that "Moretti deserves respect for not simply taking a hatchet to the papal office; it's an easy target in the aftermath of the abuse scandals and most directors would be unable to resist. Habemus Papam wants to emphasise the human consequences of a great religious office, and in that it succeeds. But Moretti's narrative construction lets him, and his film, down. Habemus Papam could have been great, but it doesn't quite get there."

"Habemus Papam is a conventional film in an unconventional setting," writes Marc van de Klashorst for the International Cinephile Society, "but as The King's Speech (okay, it is a convenient comparison) showed, there is nothing wrong with a little conventionality now and then. The Moretti film does dig a bit deeper though, and as such is the superior film."

"It's a one-joke film," writes Jonathan Romney for the London Review, "gentler and more benign than you'd expect from a left-wing non-believer like Moretti – but then his anti-Berlusconi satire The Caiman was a little lukewarm too. I wonder what the tag-line will be for the English-language posters. 'He's the pope, but he can't cope,' perhaps, or: 'No one's infallible.'"

Updates, 5/14: "Habemus Papum is no King's Speech rip-off," insists Glenn Heath Jr at the House Next Door. "[I]t's most definitely an enticing and complex statement on the different prisons (religion, sport, marriage) we trap ourselves in to protect the status quo. As an antidote to a type of universal malaise about identity, Moretti merges all of these experiences together in order to free up each one again from the limitations of apathy. For the most part, he succeeds under the grace of God."

"The movie's first act is the strangest sort of farce," writes the Boston Globe's Wesley Morris. "It reminds you that Moretti has a strong, feint humor that can be surprisingly damning, like being bruised with a feather. With the pope-to-be on the loose, half the movie stays behind at the Vatican, where the psychoanalyst, played by Moretti, remains sequestered among the other cardinals until order is restored. That provides plenty of time for the movie to go squishy, even as Moretti concocts a stinging, downbeat dismount."

"Moretti is known primarily for his wry, intellectual, and largely autobiographical approach to comedy in films including My Diary and April," blogs Barbara Scharres for the Chicago Sun-Times, "but also for serious drama in films including his 2001 Palme d'Or winner The Son's Room. Subjects he has often lampooned include leftist politics, psychoanalysis, water-polo, and the cinema itself…. We Have a Pope has scores of droll comic moments, but a great deal of poignancy as well. Its characterizations are wonderfully acute and always nicely underplayed."

"Apparently a major hit in Italy, Habemus Papum does have something to say about the role of institutional religion (at least in Western Europe)," grants the Voice's J Hoberman. "But does the movie's startlingly confessional ending really have to do with the future of the Catholic Church, or is it a statement of Moretti's self-recognized limitations as a filmmaker dealing with charged material? More to the point: Will the movies here improve? Let us pray." 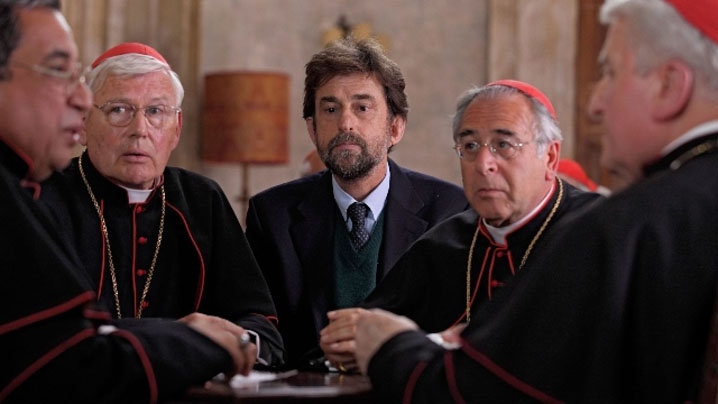 For In Contention's Guy Lodge, Pope "is the kind of classically blue-haired arthouse fare most easily described as 'harmless' — which is the last thing a film about the contemporary Catholic Church should aspire to be."

"I actually appreciated Moretti's unexpectedly gentle take on this crisis of faith, and don't much feel as if rote potshots at Catholicism would have served it any better," writes Mike D'Angelo at the AV Club. "Like much of Moretti's work (the Palme d'Or-winning The Son's Room being the main exception), Habemus Papum is slight but amusing, and often oddly touching. We got us a decent time-killer."