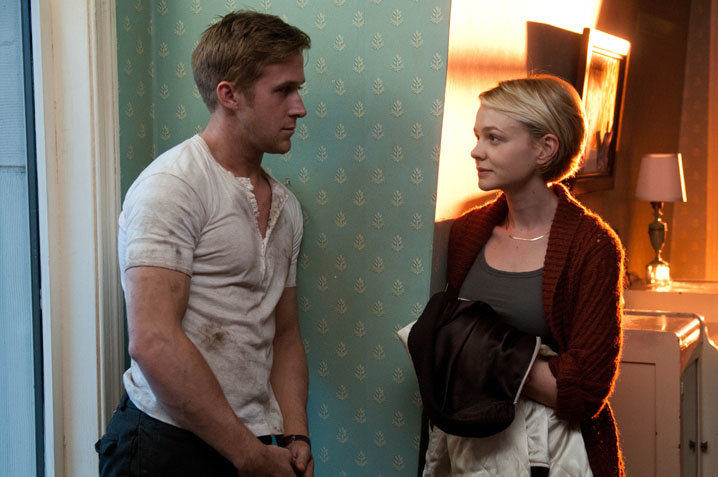 Xan Brooks in the Guardian: "Ryan Gosling stars as Driver, who flips cars for a living and occasionally moonlights as a getaway man for jewel thieves and bank robbers, offering them five minutes of his time, after which they're on their own. Driver, we soon come to realise, is an American riff on Jean-Pierre Melville's solitary samurai, smiling and serene, his moral compass set to neutral. Then one day he shares a lift with his neighbor Irene (Carey Mulligan, playing pensive) and runs clean off the road. Irene has an ex-con, almost-ex-husband called Standard (Oscar Isaac) who needs to perform one last job in order to pay off his debts and care for his family. Inevitably the heist goes horribly wrong. Now Driver is on the run, with a bag of loot in the trunk of his car and a pair of gangsters (performed with gusto by Ron Perlman and Albert Brooks) tailgating right behind."

"Carey Mulligan is fine as the mild-mannered Irene, but in truth is given little to do except smile sweetly and be won-over by Driver’s restrained charm," writes Mark Adams in Screen. "On the other hand, Albert Brooks grabs the role of gangster Bernie Rose and makes it his own — he is brilliant as the verbally witty and controlled mobster who is completely at ease dishing out the killings."

"The main problem with the film," argues Geoff Andrew in Time Out London, "is that it is so utterly derivative of movies rather than life: the clumsy dialogue, the visuals, the characterization, the entire plot feel so over-familiar that nothing, however unlikely, ever comes as a surprise. There are moments when the nocturnal shots of Los Angeles bring to mind superior crime fare, but there's no substance to all the flash. As for any emotional heft regarding the protagonist's feelings for Mulligan's simpering heroine, forget it: all the smiling stares meant to convey their growing interest in one another soon become tiresome, so that his self-sacrifice feels futile and meaningless."

"After serving up a pair of intense, emotionally draining perfs in Blue Valentine and All Good Things, Gosling swings to the other extreme with Drive, channeling Alain Delon's cipher-like hitman from Le Samouraï — a cool-as-ice model that conveniently allows screenwriters to forgo the requisite backstory when creating compassionate-criminal type." Peter Debruge in Variety: "Adapted by Hossein Amini (best known for The Wings of the Dove and other highbrow literary fare) from James Sallis's Los Angeles-set novel, Drive doesn't quite know how to handle the character vacuum at its core, but compensates by surrounding its protag with a colorful supporting ensemble."

"Why is Drive… even at Cannes, let alone in competition?" asks Kevin Jagernauth at the Playlist. "It's not merely because of the bloody-but-brilliant background of director Nicolas Winding Refn, whose films (the Pusher trilogy, Bronson, Valhalla Rising) have demonstrated both an eye for composition and a taste for the jugular. It's not merely because of the film's cinematic roots, with the production seemingly crafted as a clear tribute to 80s-era Michael Mann and other synthesizer-and-faux-leather action-crime stories. Rather, you can make a case that Drive is here because action cinema and genre cinema are too important — and too exciting, enthralling and, yes, artful when well-made — to be merely dismissed as suitable only for hacks to make and dolts to watch. French enthusiasm for American crime cinema from the 40s and 50s gave us the vocabulary and value set to truly appreciate film noir — and anyone who can truly appreciate film noir will appreciate Drive."

"It's a total blast," agrees indieWIRE's Eric Kohn, and so far, the grades are looking pretty good at Micropsia.

Updates: Melissa Anderson for Artforum: "Drive provided, if only temporarily, a welcome change of topic from the von Trier fiasco: Gosling's smoldering foxiness, which hypnotized several colleagues, regardless of gender or sexual orientation, I spoke with afterward (Queer Palm jurors, take note). Gosling's heat is just one part of the film's overall seductiveness. An 'existentialist road movie,' in the words of my viewing companion, Drive is such a thrilling, taut, visually dazzling exercise in genre filmmaking that even its more gruesome scenes — such as Gosling crushing a man's skull with his foot — left all of us giddy."

"Drive's narrative trajectory goes down a long and winding road into hell, and Refn's genre signposts form stirring corridors, avenues, and lanes of directionality," writes Glenn Heath Jr at the House Next Door. "Dimly lit hallways, empty doorways, recycling stoplights, and tinted windows all reflect varying shades of shadow and light. A key scene in a cramped elevator is the apex of Refn's contrast between light and dark, displaying the purity of emotion one moment before cutting directly to the film's most insanely brutal exchange. If there's a more riveting moment in a film this year I'll be shocked."

Drive is "easily the coolest, sexiest and most gratifying film of the festival so far," writes Adam Woodward at Little White Lies. And 10 out of 10 from FirstShowing's Alex Billington.

Movieline's Stephanie Zacharek: "Drive not only met my hopes; it charged way over the speed limit, partly because it's an unapologetically commercial picture that defies all the current trends in mainstream action filmmaking. The driving sequences are shot and edited with a surgeon's clarity and precision — Refn doesn't chop up the action to fool us into thinking it's more exciting than it is. This is such a simple thing. Is it really reason enough to fall in love with a movie? Considering how sick I am of railing against the visual clutter in so many contemporary action movies — even some that are very enjoyable are not particularly well-made — I think it is."

For Mary Corliss, writing for Time, Drive is "a studious collection of clichés from earlier and more satisfying LA crime movies. The hammy acting of Bryan Cranston as a limping stunt chief, and the visual sentimentality of the driver's relationship with his neighbor (Carey Mulligan) and her young son, send Drive crashing into the wall of its meager pretensions."

"Too bad Refn still doesn't know how to shoot characters in motion," finds Simon Abrams, dispatching to the L. "[T]he controlled but rather quiet opening chase is pretty charming, but when he films a car chase in broad daytime, the result looks suspiciously like a very surreal car commercial. Good thing much of the film's purposefully brutal violence has nothing to do with cars or, uh, driving. Still, Drive is Refn's most accessible film and his best after Pusher II: With Blood on My Hands. There's no way he can be ignored now."

Updates, 5/21: For Mike D'Angelo, writing at the AV Club, "if the plot seems disposable, and the relationships vaguely hollow, Winding Refn and his superlative cast put it all across with an uncommon directness that seems to somehow transcend cliché, even as if the film cheerfully replicates many of the schlockiest tropes of the generic 80s action flick. At least half a dozen scenes are burned into my memory for life, including not one but two of the most jarring, heartbreaking juxtapositions of tenderness and violence this side of classic Kitano. At its best, it's pure genre bliss."

"Ultra-violent and ultra-stylish, Drive stands out in this year's Cannes competition for its calculated, hard-edged brilliance," writes Salon's Andrew O'Hehir. "It's frankly commercial and sneakily artistic, in a way no other film I've seen in this festival is. It could be a big international hit — Americans will get to see it in September — or it could become one of those genre-geek fetish objects that doesn't quite connect with a mass audience. It's been the talk of the town since its Thursday night premiere, and no wonder; the history of Cannes is all about the long cinematic collaboration between Europe and America, and Drive distills that into one concise, intense and exciting movie."

The Boston Globe's Wesley Morris: "Drive had me from its near wordless opening, which, just through crisp staging and superb editing, told us everything we need to know — about what's going on and what the stakes are. There is, then, video-game-arcade electro-pop and a title sequence done up neon-pink that says 'Dear Michael Mann, this is for you. Love, 1985.'"

The driver "can straddle a bloodied man in a roomful of naked strippers and threaten to pound a spike through an eye with a hammer, then walk away unfazed," notes Barbara Scharres at the Chicago Sun-Times. "Having some familiarity with Refn's past work, I was expecting him to keep an ironic distance from the romantic and family-oriented aspects of the plot. That doesn't seem to be the case and the unconsummated love story especially, comes off as downright sappy. For all the film's edginess, I was puzzled by some of Refn's choices, including the soundtrack's string of pounding rock ballads that comment on the action with lyrics like, 'He's a real human being, and to me a hero.'"

"It's intriguing that the two best male performances of the festival, Gosling and Jean Dujardin, star of The Artist, are both largely silent," notes Kaleem Aftab in the Independent.

Time Out Chicago's Ben Kenigsberg: "Without apocalypse or dinosaurs, Drive has somehow provided grist for some of the most enjoyable arguments of the festival: Is it too derivative? Too pretentious? Too mainstream? Too abstract? And most importantly: Will the jury go for something so Hollywood?"

Updates, 5/23: "A small story and a small production are offset by the 'scope frame's extensive, vibrant use negative space, big empty swathes of the screen used for popping shapes of color and light," writes Daniel Kasman here in The Notebook. "There is more negative space then there are characters in the film, and that piercing anti-content re-invests the blank fatalism of Drive's few people with a further emptiness, as if their vacant stares project out of their eyes pure, vacuous graphic abstractions."

"Winding Refn has enough confidence in the urgency of his film's tensest set pieces to shoot them in long, pragmatic takes that run counter to the prevalent current practice of chopping action up into kaleidoscope shards," writes Guy Lodge at In Contention. "It's worthwhile comparing the film to Justin Lin's preposterously entertaining car-chase extravaganza Fast & Furious, which relies solely for effect on the physical extremity of situation entered, before outdoing itself to show us said situation from every available angle; Drive is far more concerned with conveying the continuous subjective experience of the driver himself, right down to the internalized sound design that repeatedly amplifies the creak of Gosling's leather driving gloves to near-fetishistic levels."

"With each leathery creak of our main man's gloves, overhead nighttime shot of the City of Angels (or, rather, Angles) and precisely placed visual reminder of his scorpion-emblazoned jacket (the famous 'scorpion and the frog' anecdote invoked, unnecessarily, to corroborate that Driver can't change who he is), Drive boosts a straightforward crime saga to the status of rewatchable cult classic." Aaron Hillis for Moving Pictures: "Thanks to Refn's impeccable technical prowess, it's a choice ride that turns every corner like it's on rails."

Dennis Lim talks with Refn and Gosling for the New York Times.