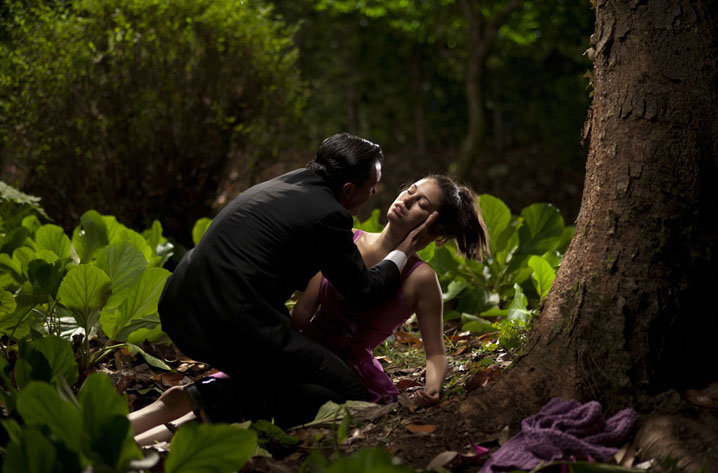 "It is almost a given that detractors of the newest from Pedro Almodóvar will blurt out the film's baroque twists in their contortions to craft the glibbest dismissal possible; at the same time, a reluctance to spill those strange story points shouldn't be taken as an unequivocal endorsement. Of all the great modern European filmmakers, Almodóvar has recently felt like the one in most peril of turning his groove — sumptuous surfaces, a tone between the operatic and the soap-operatic, each frame glossy with the delight of cinema like a lipstick smear from an ardent lover — into a rut. With The Skin I Live In, he's clearly jolted and wrested himself out of any potential rut; the concern is now, rather, what to make of the new territory he, and we, are in." The grade James Rocchi settles on at the Playlist: B-.

Antonio Banderas plays Dr Robert Ledgard, "an eminent plastic surgeon and university researcher," explains the Hollywood Reporter's Kirk Honeycutt. "He presents colleagues with a paper indicating he has been researching the creation of a new and better, stronger skin that considerably bends the boundaries of bioethics. The audience by this point is well aware that confined within his mansion is a young woman, Vera (Elena Anaya), who is being molded — there is no other word for it — to the doctor's specific requirements. And that would be to largely resemble his late wife, who was burned beyond recognition in a car crash and chose to die rather than to live in such ruined skin. Vera wears a skin-colored body stocking like a second skin and spends much of the time in a series of yoga positions. These help her to reach an inner core of selfhood the doctor can never touch."

Perhaps we should stop there. "The less said about the story, the better, as it's built on slow revelations and quick surprises," Time Out London's Dave Calhoun advises us. He also reminds us that the "last time Banderas worked with Almodóvar was for Tie Me Up! Tie Me Down! in 1990. Twenty-one years later, they're back together for an adaptation of Thierry Jonquet's French novel Mygale (Tarantula in English translation)." Four out of five stars: "Almodóvar's ambition sometimes overtakes his writing, and at points his storytelling tends towards the knotty. It's also a film that's more interesting in the unveiling than the conclusion, and its last twenty minutes feel a little underwhelming and pedestrian compared to much of what's come before. Mostly, though, this is a wonderfully strange, oddly sexy and attractively perverse mystery."

"Almodóvar has taken something from Georges Franju's 1960 film Eyes Without a Face and possibly also Alejandro Amenábar's Open Your Eyes from 1997," writes the Guardian's Peter Bradshaw. "It is also conceivable that he wants us to think of Evelyn Waugh's story Love Among the Ruins. But influences and allusions are almost beside the point, given the fact that almost every scene, every shot, must remind you of every other Almodóvar picture. As ever, it is sleek and stylishly furnished, sensually charged with richness and colour, and splashes and gashes of red. There is a surging Hitchcockian orchestral score and a breathless sense of imminent violence: handguns are coolly disclosed in desk-drawers and expensive ladies' handbags; crime scenes are established in stunning overhead shots." What's more, "Almodóvar brings something hypnotic to the surgery-porn aesthetic of his operating theatre of cruelty: the latex, the scrubs, the cold steel, the exquisite yet appalling contrast between wounds and young flesh. It is twisted and mad, and its choreography and self-possession are superb."

Skin "sees the director working with his usual creative team — cinematographer José Luis Alcaine, production designer Antxón Gómez, and perhaps most notably, composer Alberto Iglesias — to distil their elegant and restrained art into an entertainingly preposterous story which is nudged even further along by Almodovar's trademark gender preoccupations," writes Screen's Fionnuala Halligan. IndieWIRE's Eric Kohn finds that "the Spanish auteur has a good time with outrageous plot twists and offbeat sexual intrigue. However, Almodóvar appears unmotivated to even try holding it all together."

Stephanie Zacharek reports on the press conference for Movieline: "I wanted suspense, but without gore, without blood. I didn't want it to be a gory affair, with blood flying everywhere." Adds Melissa Anderson at Artforum: "Almodóvar has described his film as 'a horror story without screams or frights'; I'd add without risk or intelligence."

"Due to be released Stateside in November by Sony Classics, the film will open Sept. 2 in Spain, marking the first time Cannes vet Almodóvar has premiered a film at the festival in advance of its local release," notes Justin Chang in Variety.

Updates: "The Skin I Live In isn't quite as el sicko as I'd hoped it would be, but the depraved gleam in its eye its nonetheless irresistible," writes Stephanie Zacharek at Movieline. "The plot, as Almodóvar has reworked it, is a little messy, with lots of twists, turns and coincidental family secrets. And in stretches, it relies a little too much on characters' expository dialogue. But when it comes to the movie's visuals, Almodóvar — working, as he often has in the past, with cinematographer José Luis Alcaine — is in his element. The picture is rendered in crisp, flower-garden colors, and there are some glorious shots, particularly at the beginning, that render Vera's body as if it were a glorious desert landscape, all sand-toned hills and valleys."

"The Skin I Live In is the work of a master near the top of his game," declares the Telegraph's David Gritten.

Updates, 5/20: "So often — most recently in the 2009 Broken Embraces — Almodóvar has dramatized a man's severe reaction to the loss of his beloved," notes Time's Richard Corliss. "Here, Robert has been devastated, quite possibly deranged, by two domestic cataclysms: the car crash that burnt and killed his wife Gal a decade before, and a sexual assault, by a hopped-up kid named Vicente (Jan Cornet), that drove his daughter Norma (Ana Meana) to insanity. Robert will find cutting ways to avenge that crime, and to bring his adored Gal back into his home. Like James Stewart's lovesick griever in Vertigo, who alters the couture and coiffure of a sales clerk to make her resemble his dead dream girl, Robert has sculpted Vera into the living effigy of his late wife…. Content to tell its time-shifting story without soaring above its source, The Skin I Live In is only middling Pedro — which is to say better than 78% of other people's films. But it has gleaming surfaces hiding the darkest habits and, in Anaya's Vera, a screen beauty who reveals the private pain at her essence."

"They don't sell popcorn at Cannes," sighs Salon's Andrew O'Hehir, "which is too bad, because The Skin I Live In delivers more of an old-school moviegoing experience than anything else here this year." This "is genre-movie Pedro, Hitchcock-en-español Pedro, a fair bit icier and less emotional than the female-centric melodramas he's made recently with Penélope Cruz."

"Even a second-best Almodóvar film has its delicious moments," grants Barbara Scharres at the Chicago Sun-Times, "but The Skin I Live In is flat compared with his best work, including Broken Embraces, Volver, and his Oscar-winner All about My Mother."

Updates, 5/21: "There's no emotional subtext to the outré scenario, no sense that this lunacy reflects feelings too strong to be contained by an ordinary narrative; at the precise instant that the film threatens to address something real, it promptly ends." Mike D'Angelo, writing at the AV Club: "If you took a Weekly World News cover story and tried to reverse-engineer a screenplay from the headline, it might look something like The Skin I Live In."

"It's Almodóvar reaching back to his sickest, kinkiest self, and it's nice to see him trying to luxuriate in sleaze again," finds the Boston Globe's Wesley Morris. "It occurred to me (and to a few other people) that Almodóvar is doing David Cronenberg here. And yet I don't know that Cronenberg could have pulled this off with the blitheness or sentiment that Almodóvar has. The movie satisfyingly concludes with a great, crowning irony — the sort of tender, twisted, perfectly done endings that Cronenberg might admire but would never attempt. I suppose that's the problem with this movie. It's not nearly nasty enough."

"This is the sort of conceptually adventurous project the director needed to take on after the enjoyable water-treading exercise that was Broken Embraces, though devotees of his regular work are unlikely to be overly rattled by the shift," predicts Guy Lodge at In Contention. "As in his last non-original script, the 1997 Ruth Rendell adaptation Live Flesh, he refashions a hard, macabre text into something a little more florid." As for Banderas, this is "the first time he's carried himself like a natural movie star in several years."

The AP's Jenny Barchfield reports that Almodóvar is "toying with the idea of making his first movie in English."