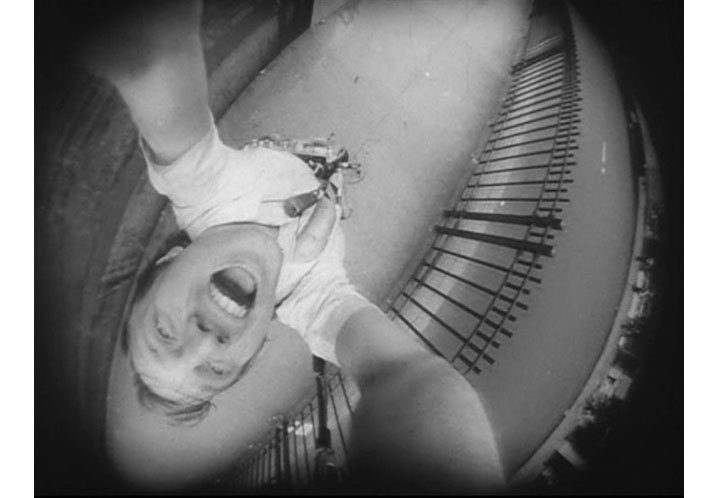 "In the crawlspace between the mockumentary and the documentary, there exists a group of movies that can tentatively be described as 'false cinema,'" suggests Jaime N Christley in Slant. "They look exactly like fly-on-the-wall documentaries, but they are, from the ground up, total fabrications. Recent examples can include Catfish and (as it has been suggested) Exit Through the Gift Shop, though the real point of origin is either Peter Watkins's The War Game (which won the documentary Oscar for 1967) or Luis Buñuel's Land Without Bread, depending on where you draw the fault lines. The group, which also can be said to include The Blair Witch Project, most of Watkins's other films (up to and including La Commune (Paris, 1871)), and a handful of others, is barely large enough to form a cohesive unit, yet a few distinct tendencies bind them together. They favor a cinéma vérité, you-are-there approach and, in keeping with documentary conventions, have actors speak directly into the camera, or to an off-camera interviewer. The director often appears on screen or is acknowledged in some way…. David Holzman's Diary, a highly prophetic independent film (it was made in 1967, but there's so much in cinema and television that has to answer to it), is from stem to stern a simulacrum of that era's cinéma vérité movement, but its seamlessness as such is due in large part, paradoxically, to its theatrical qualities, in which the raw quality of each scene and performance, examined closely, is revealed to be the result of meticulous preparation and rehearsal, or, at least, some highly skilled improvisation."

David Holzman's Diary screens tonight in San Francisco at the Victoria Theatre and sees a six-day run at MoMA in New York, also beginning this evening, even as the film streams on Fandor — all in the run-up to Kino's DVD release slated for August. Paul Bond explains in the Hollywood Reporter.

Fandor's Kevin B Lee introduces a roundup on Diary by noting that this "first 'mockumentary' of American cinema" is "a precursor to two of the most dominant strains of contemporary media culture: reality television and online video blogs. Directed by Jim McBride and starring LM Kit Carson, the film was one of the first 100 titles selected for preservation by the Library of Congress National Film Registry. And yet, David Holzman's Diary has mostly existed as inside knowledge among filmmakers and cinephiles — indie director Lena Dunham once wondered if it was 'every filmmaker's secret influence.'" Fandor's also running entries on the film by David Ehrenstein, Tom McCormack, Joe Swanberg and Michael Tully as well as Brecht Andersch's interviews with McBride and Carson. The main attraction, though, would probably be Kevin's two-part video essay on the film's deep and wide influence — Part 1: "The Sons and Daughters of David" and Part 2: "Getting to the 'Real' Stuff."

Ted Hope's had Carson post a guest entry at his blog: "OK, fact is — 1967: Me and Jim McBride were writing the first-ever book about cinema-verite — it was an interview/theory book for New York City's Museum of Modern Art; we were calling it: The Truth on Film. We were interviewing the roster of new-documentary filmmakers from Robert Drew to Leacock and Pennebaker to the Maysles Brothers – including interviewing Andy Warhol for his pop-verite.  Halfway through the book-writing, McBride says to me: 'There is no Truth on Film. Basically as soon as you turn the camera on — everything changes — to not real — gets like unreal.' So we decide it's more quote/unquote 'un-truth-ful' to write this book — we decide not to write this book.  We take the $2,500.00 book-advance — and over the 10-day Easter Break from college — we make a cinema-verite mock-documentary — we figure it's the strongest way to question cinema-verite: David Holzman's Diary."

Which went on to pick up a handful of awards at various festivals before it was added to MoMA's Film Collection and, in 1991, added to the National Film Registry.

Update: Let's take Mac's point, made in a comment below, grant at least the gist of it, and illustrate with a link to Jaime Wolf's essay for the Criterion laserdisc back in 1994: "Spiritual forebear to the contemporary low-budget American independent film movement (as well as to This Is Spinal Tap and a subsequent parade of 'mockumentaries'), it is also a detailed portrait of the specific time and place geographically known as New York City in the summer of 1967, and psychically felt as that morass of fraught concepts, idealisms, and dogma we call the Sixties…. Viewed in today's hypermediated environment, against a constantly blurring distinction between truth and fiction, David Holzman's confusions and concerns seem prescient and relevant as ever."