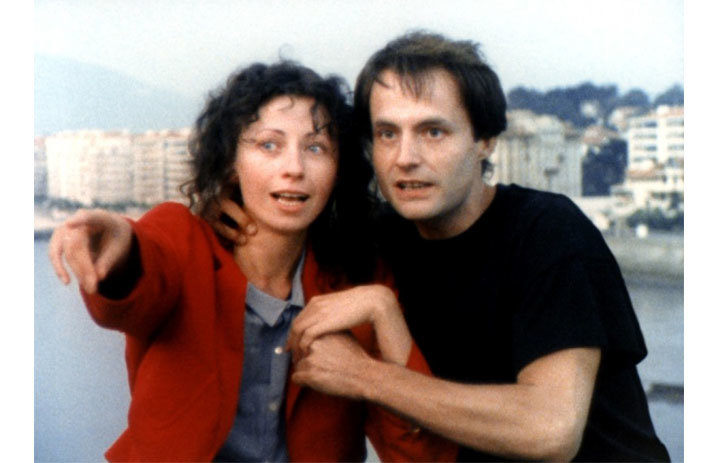 "Though Éric Rohmer's breakthrough film stateside was the lustrous black-and-white, winter-set My Night at Maud's (1969), the New Wave architect may be cinema's greatest chronicler of the summer vacation," suggests Melissa Anderson in the Voice. "Among the director's many holiday-set movies, Pauline at the Beach (1983) and A Summer's Tale (1996) explore both the languid pleasures and the romantic anguish of time off during the hottest season. Rohmer's 1986 masterpiece (being re-released with its original French title, which translates as 'The Green Ray'), Le Rayon Vert centers on those themes, too, but delivers something much richer: an absorbing, empathic portrait of a complex woman caught between her own obstinacy and melancholy."

"As Delphine, the lonely but defiant Paris secretary at the center of Le Rayon Vert, Marie Rivière creates an emotionally rich portrait of a young woman disappointed in love who transfers her energies into an anxious quest for the ideal summer vacation." Bill Weber in Slant: "In this fifth of Éric Rohmer's six-film cycle of Comedies and Proverbs, the writer-director spends the first 80 of its 98 minutes treading territory that most movie romances consign to the backstory, as Delphine, in the wake of a two-year-old broken engagement she has yet to put behind her, makes unfulfilling trips to a trio of resorts, encountering souls both nonplussed and sympathetic while, by her expectations as a modern single female, not 'meeting anyone.' Those who find Rohmer heroines difficult — that is, demanding because they are three-dimensional, non-formulaic creations with an intricate set of foibles and needs — might even be won over by the depth and poignancy of Delphine, one of its maker's most generously etched characters, perhaps given its extra layer of vigor by Rivière's credit as a collaborator on the scenario."

Nick Pinkerton begins his review in Reverse Shot with one of the finest single-paragraph primers on Rohmer you're likely to find. Take time for the piece in full, but for now, here's where he's going: "Rohmer once wrote, in rebuttal to a criticism of the protagonists of his Moral Tales, 'My characters' discourse is not necessarily my film's discourse,' but in the case of Le Rayon vert, whose heroine he awards approving benediction, it's hard to ignore the filmmaker's empathy for his subject…. It's easy enough for cynics to reduce Rohmer's body of work, in the words of one critical brush-off, to nothing but a lot of 'skinny girls whinging.' For my part, I think the glib, disassociative contempt that's often shown onscreen characterizations of weakness and helplessness is nothing short of moronic, especially in contrast to the awed respect that's gladly afforded to showy displays of violent psychosis." Le Rayon vert's resolution, he argues, is: "'Blessed are the meek.' A very Christian notion that, old as it is, isn't a bit less revolutionary."

More from Nicolas Rapold (Artforum) and Keith Uhlich (Time Out New York, 5/5). Today through Wednesday at BAMcinématek, where Rohmer's Four Adventures of Reinette and Mirabelle (1987) will be screening July 20 through 26.

The big buzzing event of the weekend will be the opening of the Film Society of Lincoln Center's new multi-screen theater and cultural hub, the Elinor Bunin Munroe Film Center. The FSLC is throwing the doors open to the public for a wide range of free screenings, lectures, panels, the works. The full program is laid out right here. To pick out just a few of the highlights: A movie marathon starting Friday night at 10 featuring past New York Film Festival opening night films (including Women on the Verge of a Nervous Breakdown, Pulp Fiction, Down by Law, Day for Night, Miller's Crossing and Ran); "Fredric Jameson on the Future of Film"; a rare screening of Jacques Feyder's Gribiche (1926); the "New Faces of NY Independent Film Panel" (Antonio Campos, Mike Cahill, Lena Dunham, Jody Lee Lipes, Sean Durkin, Benh Zeitlin, Josh Mond, Ray Tintori, Gavin Wiesen, Ben and Josh Safdie); "Paul Schrader's Film Class: Bernardo Bertolucci's The Conformist"; and there's lots, lots more.

Nick Pinkerton again, this time in the Voice: "It's easy to believe there are no great movies left to find, but you've missed at least one if you haven't seen Deep End (1970), playing alongside 10 other Jerzy Skolimowski films at the Museum of the Moving Image." Cinefamily in Los Angeles will also be screening films by Skolimowski from next Thursday through Saturday. Earlier today: David Cairns on Torrents of Spring (1989).

So on to Los Angeles, then. "Not every actor can list both Warhol films and Murder, She Wrote in their CV — oh, wait, no actor can claim that but Mary Woronov." She'll be at Cinefamily tonight for a screening of Paul Bartel's Eating Raoul (1982).

In the LA Weekly, Liz Ohanesian reports that Tim Burton's a hit at LACMA.

The Pacific Film Archive's retrospective Arthur Penn, A Liberal Helping opens tomorrow and runs through June 29. In the San Francisco Bay Guardian, Dennis Harvey notes that the chronology stops after The Missouri Breaks (1976), but what came before was "an extraordinary run: encompassing 1967's Bonnie and Clyde, one of those movies that changed the movies in general; 1969's counterculture pulse-taking Alice's Restaurant; Little Big Man, the big-noise historical black-comedy literary adaptation (along with Nichols's Catch-22) of 1970; and 1962's The Miracle Worker, a joltingly good translation of the play he directed on Broadway. Even his commercial failures were exceptionally interesting, from 1958 film debut The Left Handed Gun (Paul Newman as Gore Vidal's neurotic Billy the Kid) to 1965's Mickey One (a dazzling, pretentious expressionist nightmare with Warren Beatty at its bewildered center) and 1975's Night Moves (private eye Gene Hackman wading into a morass of Florida Keys corruption)." Half his piece, though, focuses on a "blot" right in the middle of that run, The Chase (1966).