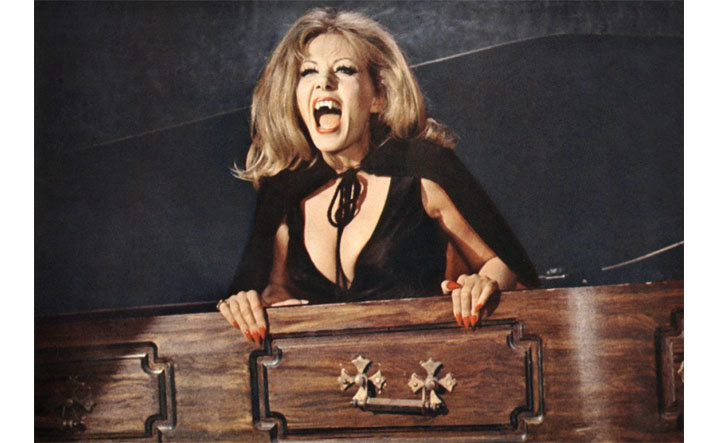 "Ingrid Pitt [site], Hammer horror's favourite heroine, has died aged 73 in south London," reports Catherine Shoard in the Guardian. "The Polish-born actor, who survived imprisonment in a concentration camp during the second world war, found fame as the blood-splattered, often blouseless star of films such as Countess Dracula and The Vampire Lovers."

"The star's death comes weeks after filmmaker Roy Ward Baker, who directed Pitt in The Vampire Lovers, died at the age of 93," notes the BBC. "She began her career with fairly minor roles in several Spanish films in the mid-1960s. But in 1968 she landed a supporting role in war movie Where Eagles Dare, appearing alongside Clint Eastwood and Richard Burton. The actress got her breakthrough role two years later in the horror thriller The Vampire Lovers, which was a box office success. Several Hammer movies followed, firmly establishing her as one of the key women of British horror of the 1970s."

"My first exposure," recalls Dennis Cozzalio, "came with her appearance popping out of a coffin, in full vampire mode, at the climax of The House That Dripped Blood (1971), a terrific Amicus anthology picture, one in which the filmmakers truly did save the best for last. Not long after that I was lucky enough to see her best performance, as the mad countess (based on the real-life Elizabeth Bathory) who discovers that bathing in the rich blood of young virgins allows her to reverse the aging process, in Hammer's Countess Dracula (1971).... It wasn't until I was much older that I saw her supremely erotic performance in The Vampire Lovers (1970), which is clearly the best of her Hammer vampire pictures, soaked as it is in gory excess and the exploration of the boundaries of a storyline in which Pitt's is not the only heaving bosom of interest.... Of course Pitt also appeared in The Wicker Man (1973), fitting in beautifully amongst the sexual abandon of the mysterious island off the Welsh coast so arrogantly disturbed by Edward Woodward's Christian authority."

"One of my fondest blogging memories occurred in 2007," writes Kimberly Lindbergs. "After writing up a brief birthday tribute for Ingrid Pitt and receiving a few comments from other fans, the actress herself stopped by my blog and left me a note.... Her bold, sassy and uninhibited nature came across in every Hammer film she was in and she never shied away from her past or made excuses for appearing in horror films. Ingrid embraced her history and celebrated it."

Back to Catherine Shoard: "Steven Soderbergh gave her a late career boost when he cast her as a sinister aunt in his 1995 noir The Underneath. She also won fans as an author with an autobiography, Life's a Scream, and three volumes of horror trivia, including 2000's The Ingrid Pitt Book of Murder, Torture and Depravity." And the Guardian posts a photo gallery.

"Her screen presence left a mark on the consciousness of all those who were exposed to it, and I believe I speak for each and every one of those souls in saying we're glad of it," writes Glenn Kenny.

Update: "She was born Ingoushka Petrov in Poland to a Jewish mother and a German father who was a scientist and refused to work on the Nazis' programme to develop rockets," writes Ronald Bergan. "Pitt was five when she and her mother were sent to the Stutthof concentration camp, where they remained for three years. 'I think I first knew I wanted to act in the camp," she said. "I used to lie on the straw and try and believe I was somewhere else.' When they were taken into a forest to be shot, Pitt and her mother managed to escape and were rescued by partisans. They spent the last year of the war living rough with the partisans, before making their way to Berlin. 'I was born into the biggest horror show of the century, the brutalities of the Nazi regime,' said Pitt. 'I think it's very amazing that I do horror films when I had this awful childhood. But maybe that's why I'm good at it.'"

Also in the Guardian, Ben Walters walks us through "a career in bitesize clips."

Updates, 11/25: The Guardian's Ben Child reports that, just prior to her death, Pitt had been working with Bill Plympton on Ingrid Pitt: Beyond the Forest, an animated short about her childhood Holocaust experiences.

This woman's life practically screams out for a biopic. Margalit Fox in the New York Times: "In the 1950s she joined the Berliner Ensemble, directed by Helene Weigel, the second wife of Bertolt Brecht, and based in East Berlin. A vocal critic of the East German Communist government, Ms Pitt was pursued by the police on the night of her debut performance, in Brecht's Mother Courage and Her Children. Fleeing, she jumped into the River Spree with her costume on, only to be fished out by an American serviceman, Laud Roland Pitt Jr. In fitting dramatic style, she married him soon afterward. That marriage ended in divorce, as did her second, to George Pinches, a British film executive."