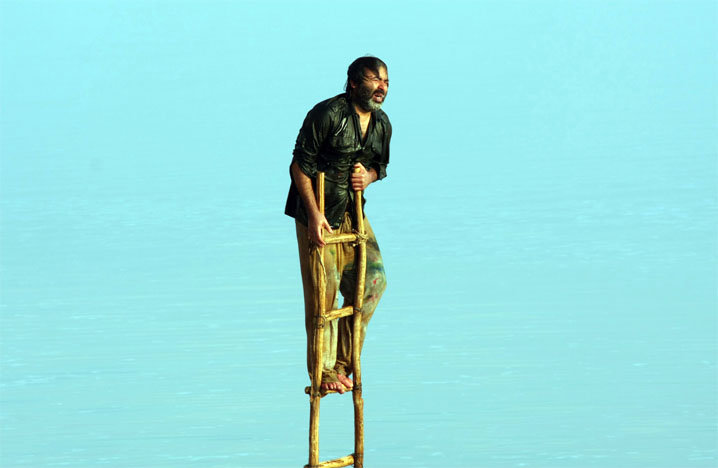 The Boston Festival of Films from Iran opens tomorrow and runs through January 29 and, in his overview for the Phoenix, Peter Keough opens with a brief synopsis of "one of the best entries," Mohammad Rasoulof's "weird and wonderful" The White Meadows. Even briefer: An artist is tortured by the authorities for painting the sea red instead of blue. "Rasoulof must have had a foreboding of his own fate. Last month, he and Jafar Panahi — the renowned director of The White Balloon, The Circle, Crimson Gold and Offside, and also the editor of Rosoulof's film — were found guilty of similar artistic intransigence by an Iranian court. They were sentenced to six years in prison and banned from making movies for 20 years — which in essence means the end of their careers. The loss to the world of Panahi's potential work is incalculable. And what we lose with Rasoulof's future output can be seen in the searing visionary beauty of Meadows, a dreamlike allegory of Dante-esque intensity and Beckett-like absurdity."

"Federico Veiroj's A Useful Life is an elegy to cinephilia and the lives less ordinary keeping it on life support in this 3D-obsessed age of ever-materializing megaplexes," writes Slant's Ed Gonzalez. "Starring real-life Uruguayan critic Jorge Jellinek, the film is practically a documentary of the effort curators go through to bring works such as this to art houses near you… For this rather hermetic, seemingly antisocial man, what is life without the cinema? Veiroj wryly ponders that question when Jorge is rattled by the announcement that the Cinemateca, because of diminishing audiences and lack of financial support, will be closing its doors. Taking to the streets, Jorge is essentially forced — as Kent Jones recently advised film geeks — to 'discover the world,' but how does one discover a world they only understand through the movies? For a shell-shocked Jorge, walking through Montevideo as if he were a creation of Lisandro Alonso, crossing the street becomes a challenge more considerable than life itself. And so A Useful Life blooms as a study of cinephilia as a means to a sheltered end." 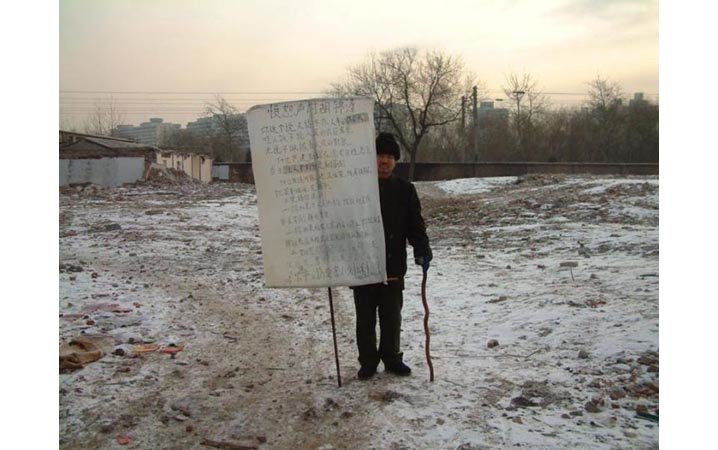 Andrew Schenker for the L: "Although it has its clear literary antecedents in Kafka and Bleak House, Petition's look at the arbitrary and corrupt nature of authority is of a specifically Chinese variety — not to mention the authentic stuff of actuality. A case of life imitating art — or rather art documenting life imitating art — Zhao Liang's non-fiction film continues the director's dissection of petty Sino-officialdom begun in his first film, Crime and Punishment [2007; also screening at Anthology Film Archives]. While that movie recorded the power abuses of soldiers policing the Chinese-North Korean border, Zhao's latest film moves to Beijing to document the bureaucratic nightmare known as the petition system."

"Petitioners" are, as David Fear explains in Time Out New York, "provincial Chinese citizens who essentially live outside of Beijing's official centers for receiving formal complaints. Some protest unlawful arrests by local authorities, while others battle instances of job-related malfeasance and medical malpractice; everyone waits months, even years, before their cases are acknowledged. Police routinely beat and jail them, clerks give them the run-around, and 'retrievers' prevent folks from entering the offices at all. Still, the claim-holders remain steadfast in their Hooverville-style shanty-camps. They aren't giving up without a fight." 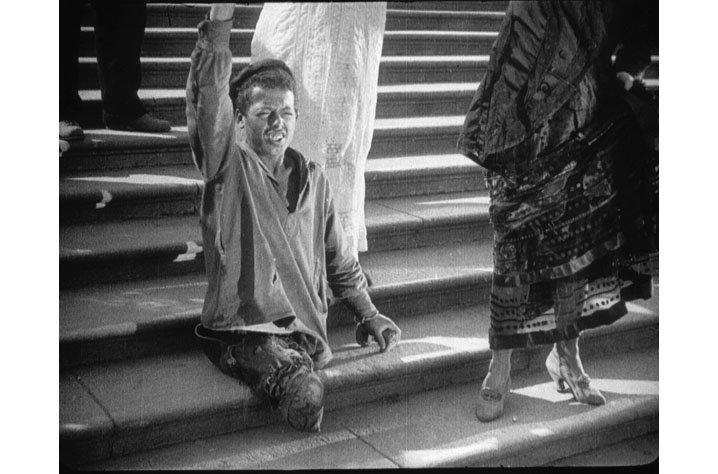 Sergei Eisenstein's "1925 bombshell Battleship Potemkin, showing for a week at Film Forum in its definitive restoration, was cinema history's third great game-changer, after The Birth of a Nation and The Cabinet of Dr Caligari," writes the Voice's J Hoberman. "Eisenstein used his new form of agitational montage to celebrate mass action and collective heroism. Shot on location, entirely with non-actors, Potemkin was designed to look like a newsreel and function as a drama — if 'drama' is the word to describe the hysteria of the movie's key scene, a massacre set on the steps leading down to Odessa harbor. The power and violence of editing has never been better demonstrated than by this space-pulverizing, time-distending, emotionally alarming barrage of two-second shots, half of them close-ups. Potemkin inspired not only the surrealist shocks of Un Chien Andalou but the ballet mécanique of Metropolis."

Salon's Andrew O'Hehir argues that "this film's true revolutionary legacy is not art cinema but Hollywood; it's got a lot more in common with Tony Scott's Unstoppable than it does with Andrei Tarkovsky." More from Jesse Cataldo (Slant, 4/4) and Joshua Rothkopf (TONY, 5/5).

"A not-quite sequel to the 1984 LA punk classic Repo Man, Alex Cox's Repo Chick is both an extreme formal experiment and a genre-mashing goof-off," writes Karina Longworth in the Voice. "Starring some of the same actors but none of the same characters, and still using the grungy edge-of-LA milieu as ground zero for apocalyptic panic, Cox's latest is a mix of digital and small-scale model animation, with live actors shot almost entirely in front of green screens… The result feels like a gonzo homemade comic book/conspiracy-crazed zine brought to life." More from Simon Abrams (Slant, 2.5/4) and Stephen Holden (NYT). At the IFC Center.

Daisy Kenyon screens tonight as part of the Seattle Art Museum's series The Art of Living: Films by Otto Preminger. For Charles Mudede, writing in the current issue of the Stranger (the one with the crosshairs cover), the "greatness of this film is found in the way it handles, examines, and explores a love crisis — sans melodrama or excitement or explosive tension. The pace of the editing is steady, the movement of the camera is smooth, the music is balanced, and the faces, expressions, and gestures of the main actors (Joan Crawford, Dana Andrews, Henry Fonda) are even. Nothing in the film overheats, overflows, or blows up." 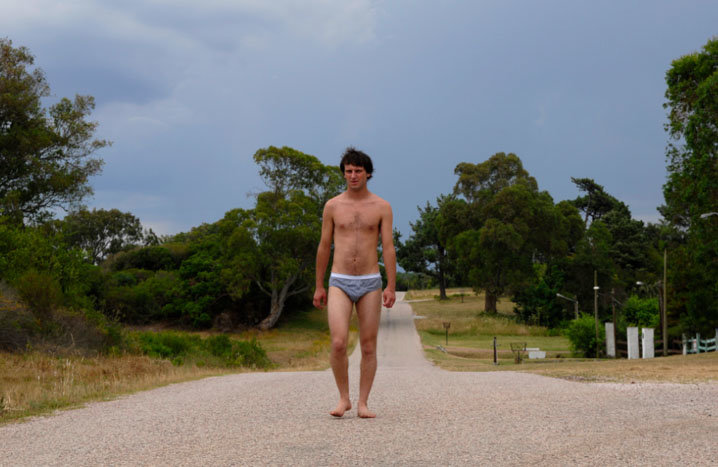 Pablo Stoll's Hiroshima opens at the Northwest Film Forum tomorrow and Mudede asks, "What kind of movie is this? It is, as the end reveals, a long and delightful music video that has successfully risen to the condition of cinema."

There are a couple of good reasons to again bring up Radical Light: Alternative Film and Video in the San Francisco Bay Area, 1945–2000, the book, exhibition and series running at the Pacific Film Archive and San Francisco Cinematheque into April. For one, it'll be traveling down to Los Angeles in the next few days, to the Egyptian Theater (presented by the Los Angeles Filmforum), REDCAT, Los Angeles Contemporary Exhibitions and the UCLA Film and Television Archive — see Reed Johnson's piece in the Los Angeles Times — before moving on to New York and Portland in May.

The second good reason is Chuck Stephens's excellent piece in blipmagazine on Bruce Baillie, whose "films from the media-saturated political cauldron that was the 1960s are madeleine Westerns sprung from the mind of a peyote Proust; mythopoetic road movies from which Dennis Hopper's Easy Rider and The Last Movie would soon there after learn to walk the walk. Folk song-simple and kalei­doscopically synaesthetic, these are films with which every cineaste ought be intimate, though few since the 60s have ever had the chance. Now available as a series of intimately assembled DVDs, mastered from the highest quality elements avail able and accompanied by hand crafted book lets filled with family photos, cryptic reminiscences, and delight fully indecipherable pro­duction notes, Baillie's films — or at least their bedazzlingly spritely digital ghosts — are among us once more." 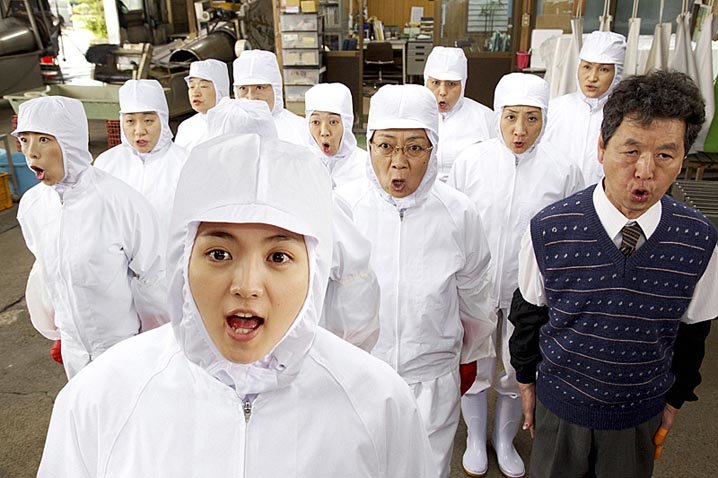 "Sawako Decides, the most recent feature by the talented 27 year-old Japanese director Yuya Ishii, might not be the best film of 2010 that you never saw, but it certainly ranks as one of last year's funniest — and perhaps more debatably, most feminist." Matt Sussman: "Yerba Buena Center for the Arts' Ishii double feature Lost in Japan, which pairs Sawako with Ishii's previous film To Walk With You (2009), is an all-too-brief introduction to a director whose modestly budgeted films about losers, misfits, and the socially marginalized in a Japan as depressed as they are have been garnering critical praise and catching the attention of festival programmers since his 2006 debut Rebel, Giro's Love. Sawako Decides leaves no doubt that Ishii is one to watch (and to watch repeatedly)." Today through Saturday.

Also in the Bay Guardian, Dennis Harvey on the newly restored On the Bowery (1956), screening at the Roxie for a week beginning tomorrow, and a preview of German Gems, which opens tomorrow with Percy and Felix Adlon's Mahler on the Couch, and runs through the weekend.

Tonight, Kentucker Audley and Jake Rabinbach will be on hand for screenings of Holy Land and Open Five at UCLA. David Lowery worked on Open Five and doesn't feel he can judge it objectively, but Holy Land is "an incredibly striking picture, as bold and assured as Team Picture [2007] was pleasantly ambling."

Nicolas Rapold introduces his interviews with Bruce Dern, Udo Kier and M Emmet Walsh for the LA Weekly: "Rudolf Arnheim wrote, 'The character actor shows man as he is; the heroic actor shows man as he would like to be.'" All three interviewees, plus Tom Noonan, will be making "An Evening With…" appearances at Cinefamily for the series, That Guy!

The Wright Stuff II, a series of double features programmed by Edgar Wright for the New Beverly Cinema, kicks off tomorrow with a sold-out triple feature of his own Shaun of the Dead, Hot Stuff and Scott Pilgrim vs the World. At his blog, Wright points to a fun set of posters for this specific event and for the individual films.

The latest announcements from the Berlinale, running February 10 through 20, list the guests and events lined up for the Ingmar Bergman Retrospective and unveil details on two Talent Campus panels, "Filming War," with Danis Tanović, Janus Metz and Samuel Maoz, and "Play as Process: Worldbuilding and New Ways to Imagine," with production designer Alex McDowell, director Shekhar Kapur and others. 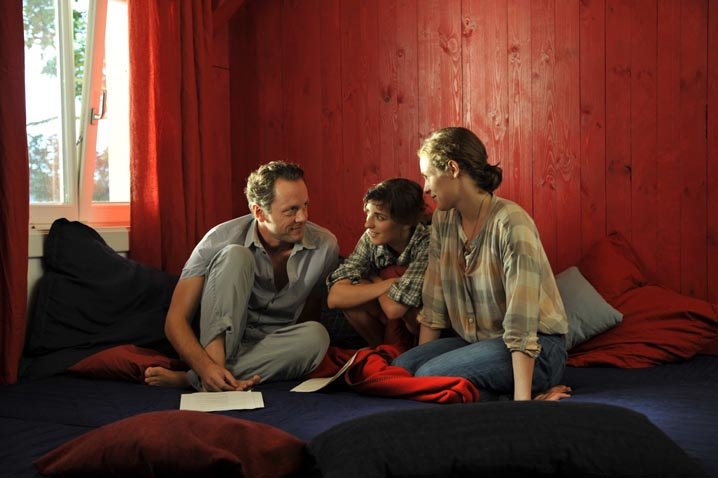 My French Film Festival is an online event launching tomorrow that'll remain accessible and festive through January 29. Ten features and ten shorts, all by emerging directors and recently released in French theaters. James van Maanen has an overview.

The Russian film journal Kinote has posted a top 25 (when you click, don't be alarmed; the titles are in English as well). Directors Notes' collection of top tens is an engaging browse. Fipresci Argentina: nominaciones 2010.

And the worse of 2010? Vulture's been asking around: "50 critics named 107 films; in our compendium of ballots and commentary, they own their choices, big time. Who sneered that Winter's Bone is 'a pointless hillbilly vignette about illiterate backwoods cretins'? Who declared Sex and the City 2 'camp's Gotterdammerung'? Which Times critic straight-up called Little Fockers a 'piece of shit'? Read on!"