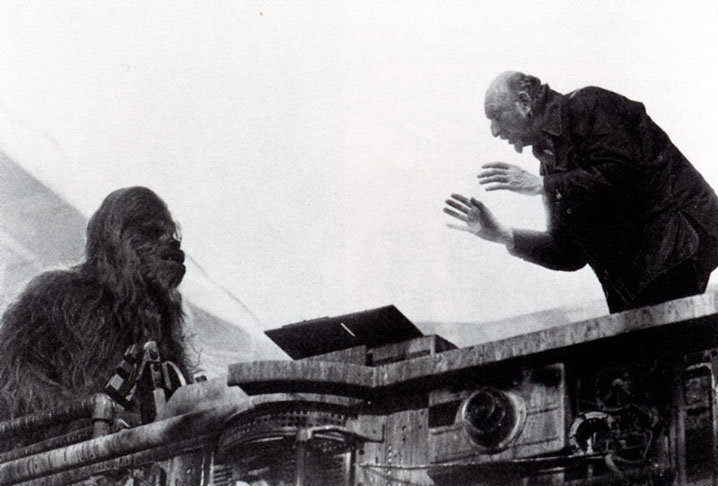 "Having fought in World War II, Kershner began his career by teaching film at the University of Southern California, but quickly made the move behind the camera via a detour as a stills photographer and TV director, calling the shots on Stakeout On Dope Street in 1958," writes Chris Hewitt for Empire. "A decent career followed, in which he directed the likes of Sean Connery in A Fine Madness, Richard Harris in The Return of a Man Called Horse, and Faye Dunaway in 1978's Eyes of Laura Mars (based on John Carpenter's screenplay). It was this movie that persuaded George Lucas, looking for someone to take the reins on his Star Wars sequel, to approach Kershner to direct The Empire Strikes Back. The rest is movie history: Kershner's no-frills storytelling style, coupled with a strong script and an imaginative visual pallet, gave Empire a gravitas that marked it out as an instant classic." Hewitt notes, too, that "he also made a habit of appearing in films, showing up in Martin Scorsese's The Last Temptation of Christ and, of all places, Steven Seagal's On Deadly Ground."

"As part of the 30-year anniversary of classic movie The Empire Strikes Back, JW Rinzler has produced an in-depth look not only at the film, but the creation of a film studio — Lucasfilm." Tish Wells reviews The Making of Star Wars: The Empire Strikes Back — The Definitive Story for McClatchy Newspapers. "It's clear that the film was not easy to make. A massive blizzard, and the coldest winter in 100 years, delayed shooting in Norway. The mechanical Imperial Walkers were painstakingly filmed in stop-motion. A mirror over the bacta-tank where Luke Skywalker (Mark Hamill) would be immersed exploded, sending 'these huge pieces of glass' into the water. As Kershner commented at the time, 'if he had been in the tank, I don't know that he would have survived.'"

Updates: The L's Mark Asch: "He was a favorite of Pauline Kael, who flipped for his 1970 film Loving, about the marital misadventures of peak-period George Segal: in her write-up from 5001 Nights at the Movies, she called it 'a beautifully sustained piece of moviemaking... [with] the sensibility and humor and feeling for character generally associated with Czech films or prewar French films. It looks at the failures of middle-class life without despising the people...'"

Glenn Kenny: "A difficult director to 'place,' as it were; the early work is replete with well-observed detail and nuance, as in, say, 1964's The Luck of Ginger Coffey, which I took a look at here. I think his 1971 Loving is galvanic and very nearly prophetic, among other things; others will tell you it's more Strained Seriousness than Expressive Esoterica....  The one time I interviewed the late Kershner, he struck me as an urbane and compassionate fellow of substantial wit and irony."

Mike Ryan spoke with Kershner just last month for Vanity Fair and IFC.com's Alison Willmore pulls this quote: "American film tends to be sentimental and rarely depicts the soul of its citizens. And if the film doesn't have guns, it isn't an action film. But for me, the real turnoff is in the final scenes. The experience is often wrapped up in a pretty consumer package guaranteed to show us that life is good and people finally see the light. Foreign films tend not to have this denouement. The chips fall and lay dead and buried if need be. Think of Kurosawa's Seven Samurai, David Lean's Lawrence of Arabia, Ingmar Bergman's great films Fanny and Alexander and Cries and Whispers, or Fellini's 8½. The stories are not skewed for the happy ending. The studio system is geared to make money, not to tell stories. American films generally cost too much to make and cost millions more to advertise so that the product can open as many pockets as possible."

At the AV Club, Sean O'Neal notes that, when offered Empire, "Kershner famously refused at first, not wanting to be the guy who had to follow the most successful film in history at that point. However, he eventually came around (at the insistence of his agent), and soon began to see the film not as a rehash, but as a deeper, darker exploration of its characters — something he was known for in his previous work. Although reviews were initially mixed, over time The Empire Strikes Back has become a fan favorite precisely for all the elements Kershner brought to it, somehow giving a galaxy-spanning space opera full of epic laser battles and spaceship chases and people getting frozen in carbonite an undercurrent of real human drama.... In 1990, he was handed yet another thankless sequel job: RoboCop 2, the follow-up to Paul Verhoeven's dystopic sci-fi classic, had its own rocky road to production, with an 'unfilmable' script by Frank Miller famously cast aside at the last second. But despite critical reaction to the film — who saw it as nothing more than a rehash with extra violence — in my opinion, it's a vastly underrated successor. Kershner kept many of Verhoeven's satirical nods while also adding his own elements of black comedy; midway through the film, the story of RoboCop turns into a tragicomic spin on the Frankenstein myth as, after he's dismantled by Nuke's gang of drug lords, OCP refuses to let the poor guy die already, instead hooking his twitching severed torso up to a computer and stuffing him full of all-new Prime Directives. It's mordant stuff..."

"Kershner's use of locations, such as a wintry Montreal in The Luck of Ginger Coffey (1964), which starred Robert Shaw and Mary Ure as an Irish immigrant couple coping with unemployment and separation, and New York in A Fine Madness (1966), was particularly effective," writes Ronald Bergan in the Guardian. "In the latter, a sour screwball comedy, Sean Connery rants and raves as a radical poet, telling a group of women: 'Open your corsets and bloom, let the metaphors creep above your knees.' Kershner continued to get fine performances from stars such as George C Scott, turning on the charm in The Flim-Flam Man (1967), and George Segal in Loving (1970), a touching and sharp drama of a commercial artist rebelling against the routine of marriage and career. In Up the Sandbox (1972), Barbra Streisand rebels against her domesticity by having garish fantasies, one involving seduction by Fidel Castro.... In his last years, Kershner kept active by lecturing at various universities throughout the US, and planning a number of projects, few of which saw the light of day. 'My career is a disaster,' he remarked. 'After The Empire Strikes Back, I got to make big films that I didn't care about, Never Say Never Again and RoboCop 2, and then I got too old. I love my early movies, but naturalism is an artist's early style. Now I want to deal with feelings, dreams, an acceptance of irrationality. I want films to haunt an audience, to give them something to remember and be able to talk about.'"

"When people ask me to name my favorite movie of all time, I never hesitate: The Empire Strikes Back. Never just Star Wars." At Movieline, Mike Ryan (the very same Mike Ryan who conducted the interview with Kershner for Vanity Fair): "Asked his own favorite movie of the last 10 years, perhaps I shouldn't have been surprised when Kershner replied with another technical marvel — one rich with story and deep characters. 'Ratatouille,' he responded. '[It] has a fine mixture of a credible love story, a sense of family and the black sheep, and a mature satire. Its animation is extraordinary in its color, cinematic compositions, and well-rounded figures. Film is a window to the real world but a lie that makes you believe the unbelievable. Ratatouille is a story that keeps its tension intact throughout its telling. The film has inner rhythm, as a film should. It has a story full of suspense, humor, and believable characters. It works on many levels for adults as well as children.' Does that description sound familiar?"

Joe Leydon: "Kershner seemed amused when I told him that, when I first saw Loving back when I was in college, I really didn't care much for it because I couldn't relate to its melancholy story about a guy who was beginning to worry that he'd taken a wrong turn somewhere in his career — and, worse, in his life — and worried whether it was already too late to turn back. But when I watched the movie again 15 years later — and this is the part that Kershner really enjoyed hearing — it was much, much easier for me to relate to the lead character, and to appreciate the spot-on accuracy of the movie's insightful observations."

"When I think of Kersh, I think of his warmth, his thoughtfulness and his talent," says George Lucas in a statement released today. "I knew him from USC — I attended his lectures and he was actually on the festival panel that gave the prize to my THX short. I considered him a mentor."

Updates, 11/30: Bruce Weber: "Mr Kershner was a tall man with long, angular features whose authority on the set was leavened with wit and good humor; The New York Times once described him as 'court jester, cheerleader and undisputed boss all at once' and as 'Ichabod Crane with humanity.'"

For the AP, Robert Jablon quotes from two statements. Francis Ford Coppola: "We all enjoyed knowing Kersh, learning from him and admired his creative spirit and indomitable will. It was always exciting to talk with him about all aspects of cinema and life. He will most certainly be missed." And Barbra Streisand: "He had the most incredible spirit, an exuberance for life. Always working, always thinking, always writing, amazingly gifted and forever curious."

"What's so oddly compelling about Robocop 2 is the way Kershner tries to redeem even the film's most indecent baddies," blogs Simon Abrams for the New York Press. "There's a crude humanism to the film that's infinitely more stirring than the hokey community-centric storyline of Robocop 3. Cain [Tom Noonan], who effectively dies twice in the film, goes out (both times) with a look of agonized terror that's anything but cathartic. He's the big baddy, ruthlessly cutting up a guy with a rusty scalpel just for revealing where their old hide-out was. But when he gets smothered in his hospital bed and reduced to a brain, a spinal cord and a pair of googly eyes, you're scared for him. Even Hob [Gabriel Damon], who in Cain's absence turns into a pint-sized zoot suit-wearing entrepreneur, reverts back to being an innocent kid. These miraculous transformations are Kershner's legacy: bad people exist in his films but they are all, basically, human beings that get hideously transformed by their disgusting actions. Too bad that that only really comes across in Robocop 2 once the film's antagonists are at the point of dying."

Update, 12/2: The Guardian posts a gallery of photos.