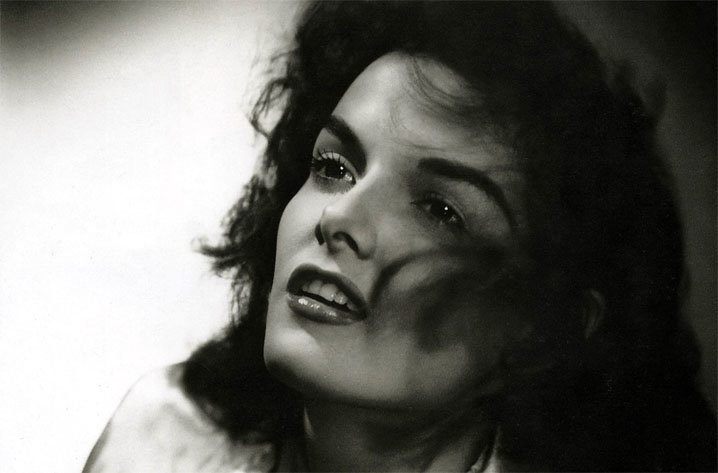 "Jane Russell, the dark-haired siren whose sensational debut in the 1943 film The Outlaw inspired producer Howard Hughes to challenge the power and strict morality of Hollywood's production code, died Monday at her home in Santa Maria, Calif. She was 89." Claudia Luther in the Los Angeles Times: "Russell's provocative performance in The Outlaw — and the studio publicity shots posing her in a low-cut blouse while reclined on a stack of hay bales — marked a turning point in moviedom sexuality. She became a bona fide star and a favorite pinup girl of soldiers during World War II. Troops in Korea named two embattled hills in her honor. She went on to appear in 18 more films in the 1940s and 50s and, though only a few were memorable, she remains a favorite from the era for her wry portrayals of sex goddesses who seem amused by their own effect."

Anita Gates in the New York Times: "In the western comedy The Paleface (1948), she played Calamity Jane opposite Bob Hope, with whom she also starred in Son of Paleface, the 1952 sequel. In the musical comedy that she called her favorite film, Gentlemen Prefer Blondes (1953), she starred with Marilyn Monroe as one of two ambitious showgirls. Her numbers included 'Two Little Girls From Little Rock,' one of several duets with Monroe, and the comic lament 'Ain't There Anyone Here for Love?' Two years later she starred with Jeanne Crain in Gentlemen Marry Brunettes, a sequel of sorts, set in Paris."

"Russell's other films included two with Robert Mitchum, His Kind of Woman and Macao, and Double Dynamite with Frank Sinatra and Groucho Marx," notes Sean O'Neal at the AV Club, where he posts a couple of clips, and Glenn Kenny passes along an anecdote from Mitchum.

Join the discussion or add a remembrance here.

Updates: "She was brought up on a ranch, with four brothers, horses and fruit trees," writes Mark Cousins. "From the beginning she was a tomboy, preferring a plaid shirt and jeans to dresses; the theme of getting out of trousers and into something slinky, or vice versa, turned up in her more personal films, such as The French Line (1953) and The Fuzzy Pink Nightgown (1957). Throughout her life Russell hated what she saw as feminine fussiness. She felt that women should be treated the same as men – no special privileges — yet insisted that she was in no way a feminist. 'A man should be the head of the household,' she once told me, 'and a woman should be the heart.' … I got to know her in the late 90s when she and John [Peoples, her third husband] came to Scotland. She was exactly as Mitchum described her: no-nonsense and down to earth. She did her makeup in five minutes, laughed a lot and was unforgettably generous with her time and stories… Russell said that in the whole of her movie career she had had little creative satisfaction. She always worked with macho filmmakers and wished she had worked with a 'woman's director' such as George Cukor. When John died of a heart attack in 1999, she was on her own again. I asked her once how often she was happy. She replied, 'Sometimes life is a valley of tears and sometimes it's the top of the mountain.' How often the top of the mountain? 'Oh, often, very often.'"

The Guardian's also posted a photo gallery; and from Sight & Sound, a shot of Russell meeting the Queen.

Matt Singer at IFC.com on Gentlemen Prefer Blondes: "Dorothy Shaw has to be one of the coolest characters in all of the movies, a one-liner factory built like a brick house… Russell's promiscuous ways — in an age when married couples still slept in separate beds onscreen, Dorothy openly admits to sleeping with a guy on their first date — aren't portrayed as sleazy or slutty. Dorothy is simply smart, self-aware, and self-reliant. None of the men in this movie, even the one she ultimately chooses to be with, seem good enough for her — Hawks, taking a page of the Hitchcock playbook, cast duds as his male leads so that the women would be even more appealling. It worked: though Gentlemen Prefer Blondes stars two of the most beautiful women to ever appear in the movies, it's not about fantasizing about them; it's about fantasizing about being them."

Peter Martin at Cinematical on Macao: "Reportedly, producer Howard Hughes fired director Josef von Sternberg a third of the way through and replaced him with Nicholas Ray. The film is an oddball stew of murder, mystery and intrigue, confusing to unravel. Russell, as a lounge singer, trades sarcastic barbs with Mitchum and easily holds her own. Mitchum could make powerful men look weak, but Russell was strong enough to stand up to him — and look convincing doing so."

In the Telegraph, Florence Waters recounts the controversial release, re-release and poster for The Outlaw, while David Gritten writes, "It was not known in her peak that she had had a wild life of her own — teenage affairs, abortions and alcohol problems. In the later years she became identified as a staunch conservative and effectively disowned the excess of her past. Still, she will be remembered as a genuine Hollywood star — one who could sell cinema tickets in her own right and hold her own on stage with formidable male leads."

The Guardian's Andrew Pulver writes up a batch of clips.

"There aren't many sex symbols who seem chummy on screen," notes the Siren. "A guy could buy her a beer without being ensnared forever; a woman could lament an errant lover to her without fearing that Russell might snap him up on the rebound. Russell had talent; witness her hilarious courtroom scene in Gentlemen Prefer Blondes, in which she out-Marilyns Marilyn, or her perfect reactions in The Paleface, one of Bob Hope's funnier movies. She had moxie, too; 'don't let her fool you,' said Hope. 'Tangle with her and she'll shingle your attic.'"

David Thomson in the Guardian on Russell and Hughes: "If anything had actually happened it would have ruined the dream. Looking can be so much more naive, indecent and powerful than any real action. And in the early 1940s, the movies were all about looking and desiring and not getting there. We'll never know. But the fact that we wonder suggests to me a gaze that never knew how to be realized."

"63 years ago this month, Russell appeared as the face of Vanity Fair's Hollywood issue," notes Sarah Ball. "It wasn't the only time we put Russell on VF — in August 2008, we sandwiched her between Merle Oberon, Myrna Loy, and Annette Funicello on a mock-up of an old-school version of the '08 Hollywood cover."

Update, 3/2: "A couple of weeks ago, in a post linking to Lawrence Wright's profile of the screenwriter and director Paul Haggis, I wrote about the longstanding connection between the arts of stage and screen and religious devotion," blogs the New Yorker's Richard Brody. "Jane Russell's story seems exemplary in that regard. But to see her in the French videotaped interview is to see a radiant star, still in the prime of charisma, who had been essentially doing nothing (just, as she says in the interview, commercials for Playtex, one day a year). Her career is, among other things, a monument to the glories and the degradations of the studio era, and an enduring cautionary tale for actors, who today can make choices within the industry that were within reach of few in the so-called golden age."

Update, 3/4: "In the 40s," writes Time's Richard Corliss, "Russell's eroticism was a big deal. It preceded and justified the acceptance of Marilyn Monroe and her calendar, the cartoon contours of Jayne Mansfield, Hugh Hefner's Playboy empire — the whole codifying, elevation and exploitation of the American male's mammary mania… Over the years she reversed her image: from luscious sex object to anti-sex crusader, from taboo-breaker to cultural revisionist, from prurient to puritan. Thus did Bob Hope's joke turn into a prophecy: she really did become the two and only Jane Russell."