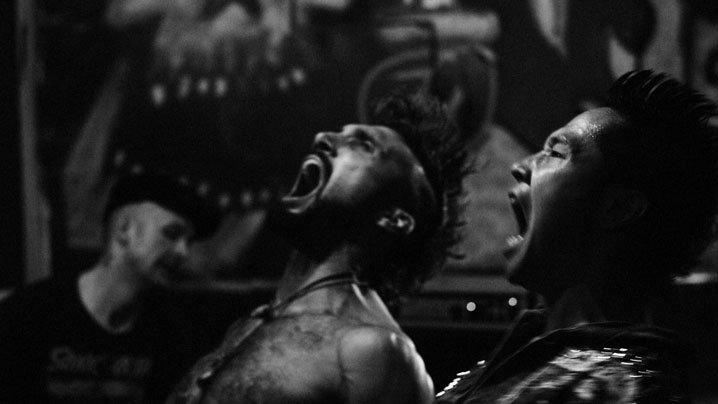 To follow up on the roundup for the first week of this year's London Film Festival, let's begin at the top of Mark Stafford and Pamela Jahn's collection of 14 reviews just posted at Electric Sheep.

"A bracing stroll through an emergent American Muslim punk sub-culture, The Taqwacores follows newcomer and straight A student Yusef as he moves into a shared house in Buffalo, New York, to get his head thoroughly rattled by its inhabitants," writes Stafford. "The film The Taqwacores brings most readily to mind was Penelope Spheeris's cult gem Suburbia, which detailed the LA squatter punk scene of the early 80s. Like Suburbia, it's a bit gauche and earnest and embarrassing in places, with lots of on-the-nose dialogue as the 'cores thrash out their conflicting ideologies. Like in Suburbia, the story has a tragic arc we can sense in the offing, and we have to endure a central character who's mainly there to ask dumb questions and get opinions thrust at him. Unlike Suburbia though, The Taqwacores has pretty good performances, especially Noureen DeWulf as Rabeya, who manages to convey a forceful personality through a customised full burqa, and Dominic Rains as the mohawked poster boy Jehangir ('I'm too wrapped up in my mismatching of disenfranchised subcultures!'). It has energy and humour and a nice bleached out look. And it throws a startling image or off-the-wall piece of dialogue at you every few minutes of its lean 83-minute running time."

The Taqwacores opens Stateside on Friday, so for more, turn to David Fear (two out of five stars in Time Out New York), Ed Gonzalez (two out of four stars in Slant) and Nick Pinkerton, who writes in the Voice: "If 'punk rock' as such is still important for any extra-musical reason, it's for its do-it-yourself tradition that gives creative kids an escape from authority-sanctioned and pop-trash culture — but The Taqwacores is more interested in the middle-finger, spit-gobbing, screw-off, frat-party acting-up variety, all pretty enervating." At indieWIRE, director Eyad Zahra discusses a scene that "embodies the entire ethos of the film." Update, 10/22: More on The Taqwacores from Neil Genzlinger (New York Times), Mark Jenkins (NPR) and Noel Murray (AV Club).

Mark Fisher on Mary and Max for Sight & Sound: "Writer-director Adam Elliot (who made the Oscar-winning short Harvie Krumpet) upsets audience expectations about claymation and what a film about friendship should be.... His sombre-coloured claymation (all browns and greys) creates a world of dysfunction, disorder and brutality, but even at its darkest moments his film is suffused with a mordant comedy."

Peter Mandelson, who most recently served in Gordon Brown's government as Business Secretary, is the subject of Hannah Rothschild's documentary Mandelson: The Real PM? You can watch about eight minutes of the film at the Guardian before turning to Geoffrey Macnab in the Independent: "As a character study, Mandelson is not very revealing, but it does provide an engrossing look at the run-up to the general election. The shadow Foreign Secretary, William Hague, is shown in Parliament, describing Lord Mandelson as 'the most powerful unelected deputy since Henry VII appointed Cardinal Wolsey, except that Cardinal Wolsey was more sensitive in his handling of colleagues than the noble lord.' Hague was only partially right. Mandelson never has achieved real power. As he points out, he entered Parliament in the early 1990s; Blair and Brown had a decade's start on him. He may have been a key architect of New Labour, but his fate was always to be behind the throne, and never on it."

The London Film Festival tag at In Contention will take you directly to Guy Lodge's dispatches. In just the past few days, he's reviewed Aaron Katz's Cold Weather, Olivier Assayas's Carlos, Guillaume Canet's "loose, genial ensemble dramedy" Little White Lies, Xavier Beauvois's Of Gods and Men, Pablo Trapero's Carancho, Aktan Aryn Kubat's The Light Thief, Feng Xiaogang's Aftershock and Estonia's submission in the Foreign Language Oscar race: "Glisteningly shot in silvery black-and-white, and graced with a dazzlingly atonal sound mix, [Veiko Õunpuu's] The Temptation of St Tony spiders its way into allegorical statements on capitalism, history and religion without ever fully showing its hand; better still, it's mordantly hilarious from its very first shot. Even by its own wilful standards, the anti-narrative dawdles in the middle stretch, and the film ends precisely one scene too late, but this is the kind of invigorating oddity for whom the projection 'Never in a million years will this get an Oscar nod' can be read as nothing but the highest praise."

Updates, 10/21: For Matthew Thrift, Peter Mullan's Neds is one of the best films at the festival: "Tonally reminiscent of the work of Shane Meadows, Alan Clarke and Gary Oldman's Nil By Mouth (1997), this brutal and often incredibly uncomfortable picture had me watching through my fingers throughout the final act, its scripting (by Mullan) and outstanding ensemble performances combining to ensure a true investment in the fate of its central protagonist."

The Guardian's Peter Bradshaw on The King's Speech: "If this is to be the UK Film Council's swan song it's gone out on a high note, or rather a regal flourish of trumpets. Tom Hooper's richly enjoyable and handsomely produced movie about George VI's struggle to cure his stammer is a massively confident crowd-pleaser. What looks at first like an conventional Brit period drama about royals is actually a witty and elegant new perspective on the abdication crisis and on the dysfunctional quiver at the heart of the Windsors and of prewar Britain."

Also: "The most enjoyable film at the festival might well be a revival — the painstaking digital restoration of David Lean's 1957 classic The Bridge on the River Kwai, which has the superb speech, courtesy of Sessue Hayakawa's Colonel Saito: 'I hate the British! You're defeated but you have no shame! You're stubborn but you have no pride! You endure but you have no courage!' This film can now be appreciated not merely as a ripping, gripping yarn but as a satirical insight into the British experience of defeat, both in the war and the years after it."

Update, 10/22: Time Out London's Dave Calhoun on A Screaming Man: "Tensions between fathers and sons and a background of civil war rear their heads again in this fourth film from Mahamat-Saleh Haroun, the Paris-based, Chad-born director of Bye Bye Africa, Abouna and Daratt. Haroun's simple framing and pared-down storytelling once more offer a contemporary parable about life in modern west Africa and create welcome space for the exploration of a few essential themes. It's a confident, controlled work, which boasts a sensitive performance from lead actor Youssouf Djaoro (who played the baker and father in Daratt)." Earlier: Reviews from Cannes.

Updates, 10/25: "The temptation to overpraise our new movie talent can induce an almost superstitious pang of anxiety," writes the Telegraph's David Gritten, "but here goes anyway: Richard Ayoade's Submarine feels like the most refreshing, urgent and original debut the British film industry has seen in years."

Time Out London's Dave Calhoun on Joanna Hogg's Archipelago: "A British upper-middle class family on holiday again offers a fruitful focus for writer-director Hogg, who follows her debut, Unrelated, from 2007 with another intimate and painful story of misunderstanding and miscommunication delivered with an uneasy naturalism defined by long, uninterrupted takes, mostly void of close-ups, and the shakiness of improvisation.... It's an aching, uncomfortable portrait of silent despair and communal discord."

Guy Lodge at In Contention on Rowan Joffe's Brighton Rock: "As one of those who had been looking forward to a new go-round of Graham Greene's masterful moral thriller — and who doesn't hold the Boulting Brothers' beloved 1947 adaptation sacred — I haven't even the heart to write a formal review of Joffe's nervously botched update. But I will say that scarcely a potential avenue for error has been left unexplored here, as the film's self-conscious (and technically over-egged) noir stylings bristle against a clearly overworked script that fidgets to no effect with Greene's plotting, with a cast that never coalesces floating somewhere amid the wreckage. Little wonder a US distributor has been shy to step forward, even as the film plays accessibly enough."

Update, 10/28: Guy Lodge not only lists the award-winners at In Contention, he also tells us what happened when he tried to get the name of the Best Film out of jury member Patricia Clarkson before the official announcement.