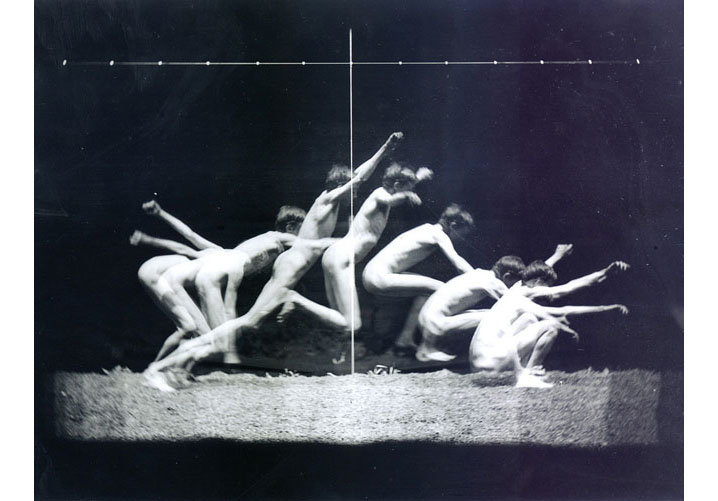 "Combining artistic vision with scientific analysis, Muybridge showed how an image that paralyses motion can catch the fluency of phenomena," wrote Peter Conrad in the Observer a little over a week ago, anticipating Eadweard Muybridge, a major exhibition opening at Tate Britain today and on view through January 16. "He was one of the great photographic thinkers, whose mind reached ahead from still photography towards the inevitable invention of the cinema, which he anticipated by constructing a gadget called a zoopraxiscope that could animate sequences of images to display mules kicking or nymphs dancing."

Over the past few months, there's been some grumbling about an interview historian Weston Naef gave to Artinfo's Tyler Green in which Naef claims that some work from the 1860s attributed to Muybridge was actually done by Carleton Watkins. "What tosh," snaps Luke McKernan, who adds that "Naef's allegations have led to all sorts of online speculation. The best responses have been Muybridge authority Stephen Herbert's Muy Blog, which looks at Muybridge's 'lost' years of the 1860s while artfully debunking Naef, and Rebecca Solnit, author of the excellent Muybridge biography Motion Studies (aka River of Shadows) whose piece in the Guardian ably defends Muybridge against the campaign of innuendo.... Meanwhile, there's a major exhibition to enjoy, which promises to bring together 'the full range of his art for the first time,' exploring the ways win which Muybridge created and honed such remarkable images, works which influenced artists such as Marcel Duchamp, Francis Bacon and Philip Glass's music, and which continue to resonate powerfully with artists today.... Needless to say, plenty of associated publications and events will be around to coincide with the exhibition," and he lists and links to several.

"Mon Oncle is not Jacques Tati's most ambitious film, nor his most democratic," writes Christian Blauvelt in Slant. "It is quite possibly, however, his most didactic and depressing. And yet it's undeniably the film of his that, despite my misgivings, has given me the most pleasure. The second entry in his series of films following the bumbling man-child Monsieur Hulot, Mon Oncle stands at the point of transition between the Old World idyll of M. Hulot's Holiday and the anti-modernist rebellion of Playtime. In Mon Oncle, Paris is pitched between the architectural remnants of its florid, romantic Belle Epoque architecture, kiosks and all, and a new sterile modernity in which functionality trumps beauty. Guess which one Tati favors?"

"Now in its 13th year, Lincoln Center's Latinbeat Film Festival continues its mission of showcasing the largely undiscovered talent emerging from the national cinemas of Latin America," writes Andrew Schenker in the Voice, where he previews five titles, including Extraordinary Stories: "The festival's major work, in terms of running time (245 minutes), ambition, and achievement, Mariano Llinás's film unfolds as both a relentless — and relentlessly compelling — narrative and a complex consideration of the function of storytelling. Interweaving a trio of enigmatic, shifting plotlines (related both visually and via a nearly nonstop voiceover) about characters stumbling on conspiracies involving a hidden cache of gold, a jail-yard smuggling, and abandoned monoliths lining a river, the film explores our desire to give shape to a world marked by mystery, a goal achieved with stirring success by the young Argentinean filmmaker."