Alex Ross Perry's second feature, The Color Wheel (2011), is now playing on MUBI in the U.S. through March 23. Ignatiy Vishnevetsky wrote about it earlier on the Notebook. 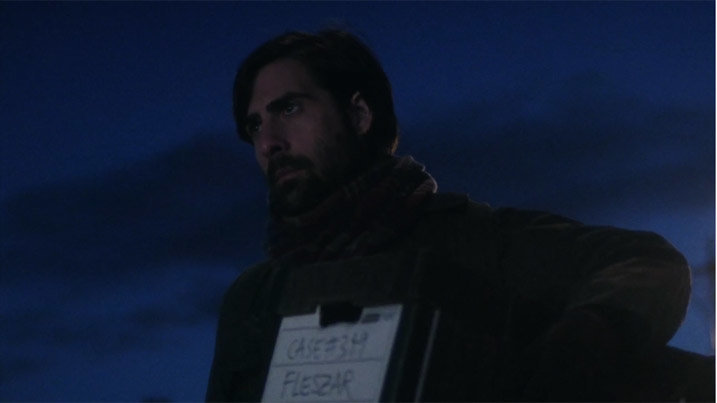 Alex Ross Perry's first two features, Impolex (2009) and The Color Wheel (2011), climax with single-take rug-pulls—performance-intensive scenes which reveal the loneliness and longing that underpins Perry's freewheeling humor. The camera style developed by Perry and his regular director of photography, Sean Price Williams, is already actor-friendly, largely handheld, and composed mostly in eye-level, three-quarter profile close-ups. These climactic sequences, however, stretch this style to its limits—﻿unfolding as a single close-up in Impolex, continually reframing from close-up to medium shot and back again in The Color Wheel—﻿﻿while also straining technical limitations. (Impolex and The Color Wheel were shot on 16mm, and both films' big long takes run almost as long as a standard 400' magazine.) What makes these sequences exciting—﻿﻿in a "What will this guy do next?" way—is that they showcase ﻿﻿﻿a filmmaker more interested in the medium's dramatic capabilities than in its conventions, as eager to delve into emotional pain as to make goofy jokes. The question of whether these scenes pull off their respective emotional gambits (though The Color Wheel's certainly does) is almost dwarfed by the filmmaking ambition they evidence.

Perry's new film, Listen Up Philip, which premiered at Sundance last month, stretches his signature move to feature length. It starts as a snappy black comedy centered on young novelist Philip Lewis Friedman (Jason Schwartzman) ﻿﻿﻿﻿and then gradually, gradially expands in both scope and tone.

Philip is narcissistic, vindictive, sincere, charming, and occasionally right—﻿﻿﻿"Positively 4th Street" with arms, legs, and a two-week beard. The pre-title card opening scenes, which function as a prologue, follow him over the course of a day-long jag, as he verbally attacks everyone he can. At one point, Philip even invites an old college buddy out for an afternoon beer with the purpose of berating the guy for not living up to his expectations. Shortly after the title card—﻿﻿as much a silent-style intertitle instruction as an opening credit—﻿﻿﻿flashes on screen, the narrative begins to expand. Philip remains the central character, but the movie doesn’t privilege his perspective.

Close-ups have a longstanding cultural association with movie-star narcissism, and though Perry's camera style is many ways empathetic—﻿﻿entering into a relationship with the characters, ﻿﻿as though they were actors themselves and not roles—﻿﻿﻿it never appears to be indulging Philip's narcissism. The close-ups tend to be unflattering, and emphasize Philip's disconnection from any given moment rather than his domination of it.

What emerges—piecemeal, scene by scene, shift by shift—is a portrait of people emotionally suffocated by narcissism, whether their own (Philip, Zimmerman, and Ashley’s sister, Holly, played by Jess Weixler) or someone else’s (Ashley, Melanie, and also, to a certain degree, Philip). Perry ends the movie with a gut-punch, with the final sentence of Bogosian’s narration—﻿an all-time-great curtain line—﻿summing up the paradox of Philip and Zimmerman's literary, creative narcissism. Focused entirely on their own feelings and problems, they can never understand themselves, because self-awareness means being aware that one’s actions don’t stop and end at “I,” but live on in the lives of others.

Perry’s work is—to steal a phrase from Serge Daney—“a cinema haunted by writing.” His major claimed influences are literary (namely Philip Roth, but also Thomas Pynchon and William Gaddis), and there's an essentially writerly quality to his use of quick cuts to furnish details. Scenes typically flit between several character's faces, reactions accumulating cut by cut. This approach doesn't situate the viewer within a fictional space (Perry's style is spatially vague), but instead creates a sense of continual, feverish comic-emotional turmoil.

Like Perry's previous two features, Listen Up Philip was shot on film, and the rough texture of the Super 16mm images occasionally makes it seem like the characters are printed on pulpy paper stock. The colors seem pre-aged, sometimes powdery, sometimes burnished. The aesthetics of books are blatantly fetishized: Impolex—a loose, gentle riff on Gravity’s Rainbow—included a bibliography in its end credits, and The Color Wheel’s credits, in turn, used a typeface based on the first edition cover of Portnoy’s Complaint; the same typeface is used in Listen Up Philip, where the end credits are accompanied by mock-up covers of books written by the major characters, which range from spot-on funny (Zimmerman) to tragic (Melanie).

And yet, despite these literary fixations, Listen Up Philip is not, by any means, a novel forced into a movie shape. Daney's phrase—﻿"a cinema haunted by writing"—﻿was how the late critic described the early years of the nouvelle vague, and there's a similar cinephilia operating in Perry's work, with its partly digested influences (a little They All Laughed﻿ here, a little Royal Tenenbaums there) and the overwhelming impression—﻿﻿reinforced here by the near-total absence of modern technology—﻿﻿that the narrative is set somewhere within the history of cinema, kitty-corner to the director's favorite films. The closest cinema—﻿﻿﻿still unmatched in regard to how quickly it developed and diversified—﻿﻿﻿﻿has to a unifying rule is that its best works tend to be the ones that are at once aware of its history and reaching for something beyond the medium. Listen Up Philip is not, in other words, an attempt at re-creating literary effects using film techniques, but a film informed by its reaching toward literature.

Novelist-director alter egos have a storied tradition in film, and Listen Up Philip is Perry’s third consecutive work to feature a neurotic young writer as its male lead. With each variation, the writer character has become more successful: The Color Wheel’s Colin had given up because he deemed being a struggling writer too embarrassing; Elliott, one of the protagonists of Perry's unreleased TV series The Traditions, is a little-known novelist; Philip is famous enough to warrant photo shoots and magazine articles, and, per the narration, will one day become a major figure in American literature. Perry—﻿who played Colin and Elliott himself—﻿blatantly identifies with these writers, who share biographical details and tastes with the writer / director. Like Perry, Philip is a non-native New Yorker, and he and Colin (and Zimmerman, a sort of future Philip) are Jewish, though their Jewishness is only acknowledged in passing—﻿a Star of David hanging off the rear-view mirror in Colin's car, an anti-Semitic remark made by one of the targets of Philip's tirades.

In many ways, The Traditions—of which Perry completed seven shortish episodes, which, added up, run about as long as a feature—is an obvious precursor to Listen Up Philip. Like the film, the series has an evenhanded sense of perspective, and devotes as much time to Elliott’s wife, Michaela (Perry regular Kate Lyn Sheil, in her finest performance), as to Elliott. The setting is a small college where Elliott has a semester-long teaching position—the same situation in which Philip finds himself in the second half of Listen Up Philip. The humor is less absurdist and slapsticky than in Impolex or The Color Wheel, and prefigures the sharper, more realistic comedy present in Listen Up Philip.

In that sense, The Traditions represents a transition in the use of humor in Perry's work. Whereas Impolex and The Color Wheel were anything-goes comedies that revealed themselves as psychodramas in the last ten minutes, The Traditions alternates between the two more or less episode by episode. Part of what instantly identifies Listen Up Philip as Perry’s most accomplished work is the way it smoothly integrates these two major tendencies; it ebbs and flows instead of channel-flipping. This extends from structure to form: the jarring sound design that had characterized Perry’s work up until now is gone (Listen Up Philip is the first film that Perry hasn’t edited himself, handing over duties to documentarian Robert Greene), and, for the first time, music—mostly a moody cool jazz score by Keegan DeWitt—meshes with the action instead of serving as interstitial glue.

Movement (narrative, formal, etc.) tends to be waltzy and organic; it effectively hides the fact that the film is an ensemble piece. New characters are continually slipping in and out of the narrative—major, minor, one-joke, all of them affected, afflicted, or enchanted by narcissism. Philip and Zimmerman are old-school Roth-Mailer-Updike literary egos, and though their prose goes largely unseen, the titles of their novels provide clues. Zimmerman's breakthrough novel was called Madness & Women, while his career-low failed attempt at expanding his range is titled A Woman's Perspective; Philip's second novel—﻿the one that's just about to be published as Listen Up Philip begins—﻿﻿is impenetrably titled Obidant.

However, their brand of literary narcissism isn't the only one on display. Philip's sort-of-rival Josh Fawn (Keith Poulson), author of The Exploding Head Trick, is a post-modern writer in the McSweeney's mold, as shruggy as Philip is high-strung; he practices a more contemporary and self-effacing kind of narcissism which is just as toxic (and, as a later scene suggests, tragic) as Philip's and Zimmerman's. From a distance, narcissism—﻿whether Philip's, Zimmerman's, or Josh's—﻿suggests confidence, but up close, it reveals itself as insecurity; part of the dynamic of the film is the way its male narcissists attract strangers, but repel the women—﻿﻿girlfriends, wives, family members—﻿﻿closest to them.

If there's a moral hero in the film, it's Philip's girlfriend Ashley, who spends most of the movie cutting Philip out of her life, piece by piece. The quality Perry contrasts with narcissism—﻿﻿﻿the quality exhibited by Ashley—isn't selflessness, ﻿﻿﻿but agency. Philip and Zimmerman, are stuck in their own close-ups, unwilling to acknowledge how their actions affect others and therefore unable to understand or rectify their loneliness. Ashley, willing to confront her own complicated feelings toward Philip and her role in enabling the nastier aspects of his personality, is able to make decisions—﻿difficult decisions—﻿to improve her life. Throughout the film, Philip is identified with close-ups and Zimmerman with handheld follow shots, which often frame him from behind. The shot which signals the movie's transition to Ashley's perspective—﻿﻿one of the longest in the film—﻿﻿is a slow zoom-in from wide shot to close-up. This establishes a crucial difference between Philip and Zimmerman's close-ups and Ashley's; theirs represent the limits of their world, while hers represent a zoomed-in view of a larger perspective.

From this angle (which seems to represent Perry's worldview), Philip and Zimmerman are overwhelmingly pathetic characters. Zimmerman—﻿﻿whose thick beard, bad temper, authoritative voice, and ever-present glass of Laphroaig make him look like a fallen Old Testament God—﻿﻿﻿is regarded with pity by the camera; a standout mid-film sequence, in which Zimmerman and a similarly middle-aged friend try to get laid, is representative of the movie's sensitivity. Attuned to Zimmerman's hurt and anxiety, but more than willing to show the warts-and-all ugliness of his personality, it brings to mind John Cassavetes' work—﻿﻿Faces in style and texture, Husbands and A Woman Under the Influence in overall tenor.

It's this commingling of the sharp and the sensitive—﻿﻿﻿always informing one another, never negating—﻿﻿﻿that distinguishes Listen Up Philip as a major work—﻿﻿﻿perhaps the major work of the modern American low-budget indie scene. It takes a closed-off subject, but refuses to succumb to his perspective, growing outward to encompass more and more characters and experiences before, in the final scene, contracting back to his narrow point of view. Framed against this large-canvas view of life, ﻿﻿﻿﻿Philip—﻿at first darkly funny in his non-stop asshole yammering—﻿becomes one of the great tragic characters of contemporary film.