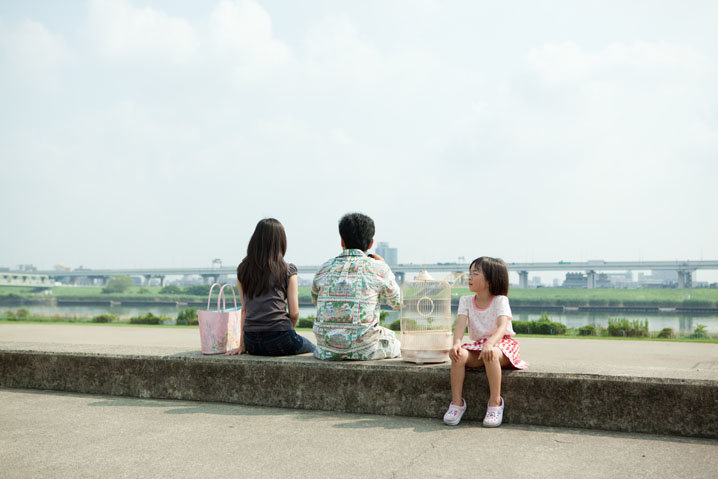 Whether you're measuring in quantity or quality, throughout this year's New Directors/New Films, wrapping tomorrow, no other publication — not the Times, not the Voice, no one — has even come close to Slant's coverage — supplemented, even, by its sister site, the House Next Door. To open this final roundup, then, we turn to them once again, starting with Chris Cabin: "There seem to be matters of social, economic, and political importance swimming in the undercurrents of Koji Fukada's sophomore effort, Hospitalité, though they are never in a hurry to be clearly identified. The inherent bizarreness of globalization, the fickle nature of capitalism, and how the modern Japanese family comes into confrontation with these forces often feel like themes directly tied to the film, but the way it unspools befits Monty Python as much as it would Haruki Murakami in its avoidance of frank and manipulative timeliness. There's even a hint of Beckett in the film's absurdist melancholy, but there remains an essential humanity to this tale of a disconnected family splintered several times over by the appearance of a larger-than-life, blithely confrontational tenant and his implacably foreign wife."

"Unabashedly riffing on Ozu, Hospitalité is set in a hermetic Tokyo neighborhood where the streets echo with the chirping of crickets." Anna Bak-Kvapil at Not Coming to a Theater Near You: "A static camera captures composed shots of trains and trees waving in the breeze. Tired husbands and gossipy neighbors interact with solemnity and politesse… Hospitalité places the Japanese social code under a microscope and suggests that while small moments of connection between Japanese and Westerners are possible, relationships refuse to work in the long term. Ultimately, Westerners are destructive rather than helpful, attractive, but nonsensical."

"Fukada and principal actors Kenji Yamauchi and Kanji Furutachi are members of the Seinendan Theatre Company," notes Christopher Bourne, "and Hospitalité does indeed have a theatrical quality, as much of the action takes place in the family's small house, and the film gets much comic mileage out of how the space gets increasingly crowded as events progress."

Back in January — in other words, before the earthquake, tsunami and nuclear meltdown of March — Chris MaGee wrote in Toronto J-Film Pow-Wow: "Hospitalité takes the nationally treasured cinema of Ozu and a gentle sense of humor to sugar coat a myriad of social ills that Japan is facing at the moment — a rapidly aging population, a declining domestic work force, debates in Parliament over whether more foreigners should be allowed to settle in the country and sexless marriages causing a decline in the country's birth rate… It's hard to imagine themes of unemployment, economic decline, adultery and xenophobia producing laughs, but this is the rare film that pulls it off beautifully."

For Derek Elley, writing in Film Business Asia, "the movie doesn't aim for any grand moral or religious statements like Pasolini's 1968 classic Theorem — in which a mysterious stranger seduces a whole family and then disappears — and ends up with a very concrete reason for the 'invasion.' Instead, it has much gentle fun with certain aspects of conventional Japanese society — everyday politesse, sweeping the unspeakable under the carpet, the country's love-hate affair with foreigners — and simply pushes its central idea to the limit and beyond, in a highly civilized comedy of manners that grows organically from the tiniest of beginnings."

Screens this evening at MoMA and tomorrow afternoon at the Film Society of Lincoln Center. 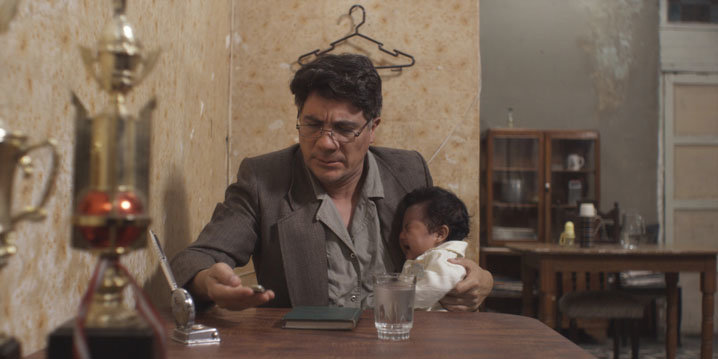 "Octubre frequently makes a show of Peru's religious fervor, but why religion matters so much to the film's characters (or doesn't), and how the pageantry of spiritual worship connects with the story's central narrative, remains uncertain," finds Slant's Ed Gonzalez. "But like Amat Escalante's Sangre, Octubre's tony aesthetic at least makes clear that directors Daniel and Diego Vega are fixated, like obsessive compulsives, on the style — if not the substance — of Carlos Reygadas's Battle in Heaven."

"Obviously substandard father material, Clemente [Bruno Odar] is naturally bit taken aback to find a little bundle of joy waiting for him," writes Joe Bendel. The set-up "sounds like a horrendously contrived sitcom, but the Brothers Vega largely play it straight, maintaining a consistently dark and gritty tone throughout. This is a seedy, naturalistic environment, perfectly suited to their aloof protagonist. They do not even exploit the baby for shots of heartwarming cuteness. Ironically, Octubre's subject matter could dissuade those who would most appreciate it, for fear of saccharine sweetness. Have no such concerns, this film is a perfectly respectable downer."

"A family is reconstituted, naturally, without unnecessary feel-good imagery and music," writes Howard Feinstein for Filmmaker. IndieWIRE interviews the brothers and Octubre screens tonight at the FSLC and tomorrow afternoon at MoMA. 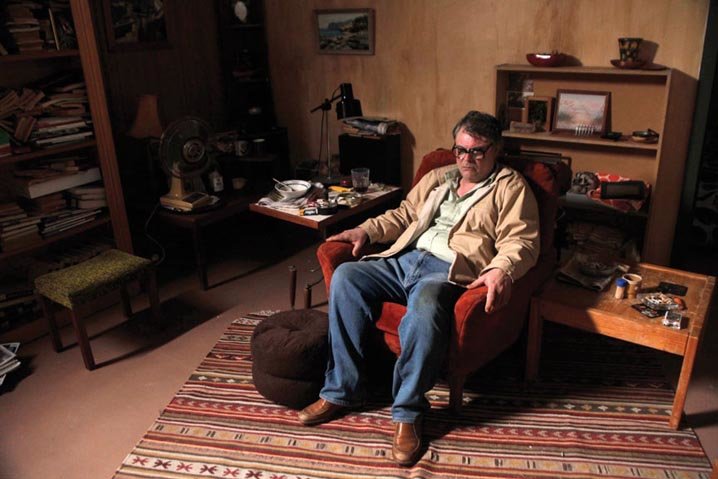 Peter Gutierrez at Twitch: "For one of the most compelling documentaries I've seen on media in a long time (and I take in a lot of these), Shut Up Little Man! certainly takes its time in winding up its punch — but, boy, when it lands, it leaves an impact. Maybe a crater. To be sure, for those who aren't so fascinated by its themes of cultural/economic exploitation, voyeurism, fandom, transmedia, and other fancy-sounding topics, Matthew Bate's doc also works quite well as a chronicle of a particular pop culture phenomenon. If you're aren't familiar with it (I wasn't), in 1987 a couple of young roommates in San Francisco got tired of asking their middle-aged neighbors to pipe down each night and instead started taping their epic, acidic, and booze-fueled arguments."

Those tapes, explains Nick Schager in Slant, "eventually became an underground sensation. Titled after Peter's most famous insult to Ray, Matthew Bate's film raises the question of what the fate of these works of 'audio verité' (i.e. recordings made in secret, and often of a pranky nature) would have been in our modern YouTube age, but never cops to the most likely answer: They would enjoy 15 seconds of fame before again receding, like 'Charlie Bit Me' and 'Evolution of Dance,' into world-wide obscurity." And "Shut Up Little Man! fails to legitimize its topic as one of any significance. Mitch and Eddie are merely a shrewd pair intent on franchising their covertly created tapes, Ray and Peter are no different than the hordes of creeps and exhibitionists crowding the Internet, and Bate, stuck with material too flimsy and shallow to elicit laughs or warrant moral handwringing, succumbs to copious dramatic recreation-and-cartoon-graphic gimmickry to mask his vacuously celebratory POV."

Circumstance is "a plaintive lesbian love story set in Tehran — though shot in Lebanon — from the director Maryam Keshavarz." Manohla Dargis in the New York Times: "The affair between the story's two teenage girls, sealed with kisses and heated up through an erotic fantasy, certainly attracted attention when Circumstance had its premiere at the Sundance Film Festival in January. But it's how Ms Keshavarz, who was born in New York, blends the love story with a portrait of liberal Iranians struggling against fundamentalism in their homes and out in the world — the brother of one of the girls has recently found God, with a vengeance — which gives the movie its power."

"Casting Iran as a sinister social and political labyrinth designed to ensnare — and thus ensure docile acquiescence from — its female citizenry is no doubt justified, but the twists and turns of Circumstance prove increasingly formulaic and phony," finds Nick Schager in Slant, and eventually, "the film, to its detriment, shifts its focus away from the human condition and toward plot-driven heartstring-tugging."

Leslie Stonebraker for the New York Press: "Like Brokeback Mountain, Circumstance fails to meaningfully advance the dialogue of queer cinema; and will be ultimately remembered only for its shocking content, rather than its confusing execution."

Circumstance closes ND/NF tomorrow evening at both MoMA and the FSLC.