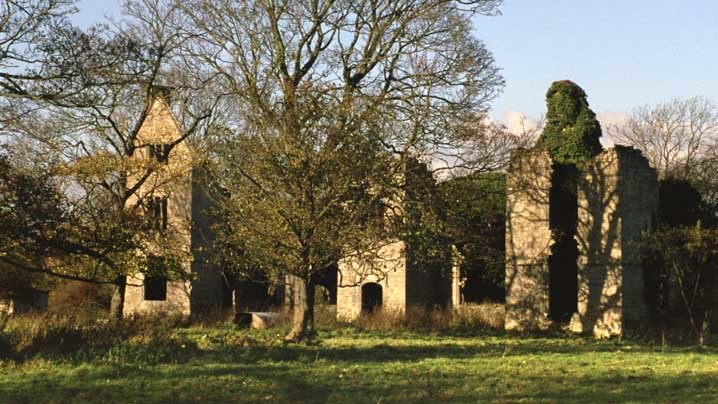 "Robinson in Ruins, the latest essay film/experimental landscape study/cinematic state-of-the-union address from the great British avant-gardist Patrick Keiller, is many things," begins Michael Sicinski in Cinema Scope. "It's the conclusion to a trilogy that even most hardcore cinephiles may not have known was in progress. It's the articulation of a failed politics of 'dwelling' and landscape use in the United Kingdom, presented with a detailed historicization that, on first viewing, is nothing short of intimidating. It's a plangent near-elegy (but not without a glimmer of utopian hope) for a spark of unconventional intellectual inquiry, quashed by the technocrats of New Labour and soon to be wiped off the map by Cameron's Big Society. But above all, this is the death knell, or so it seems, for a man called Robinson."

Naturally, clues as to who this character might be are sorted and considered, as is Keiller's place "a historical or cultural trajectory, one in which it both fits easily into the mainstream of a certain visible flow and yet has not at all been adequately seen. His early short films, such as Stonebridge Park (1981) and especially Norwood (1983), fall in line with a poetic, subjective mode analogous to certain aspects of Terence Davies's films, or even a more place-bound, straitlaced version of Derek Jarman's avant-garde approach. The three filmmakers provide a kind of study in aesthetic options for queer artists in the British scene: classicism (Davies), punk (Jarman), or Situationism (Keiller)."

"Keiller has said that if London is concerned with the problem of that city, and Robinson in Space is concerned with the problem of England, Robinson in Ruins is concerned with the problem of dwelling," notes Farihah Zaman in Reverse Shot. "This concept is explored in myriad ways as Keiller demonstrates that the answer to the question 'where do you live?' refers not only to the building one calls home, which has in and of itself been a universal preoccupation since the domination of agrarian society, but also to language, culture, community — one's place in the world and one of the foundations of human identity. The images run the gamut from street signage to abandoned grocery stores to a long, meditative moment with a tractor in a wheat field, so many quotidian artifacts of life that are dramatically recast as Keiller-as-narrator-as-Robinson makes extrapolations about everything from local governance and census statistics, to the global economy, to Neo-Darwinism, to the struggle of nature, to the ruination left in the wake of the industrial age. Keiller manages to construct a film that, while comprised entirely of images of the near past and present, creates a foreboding sense of our dystopian postindustrial future."

"Thankfully," writes Simon Abrams for the New York Press, "you don't need to accept what Robinson is saying as gospel to find Robinson in Ruins a fascinating and uniquely cinematic treatise, just as you don't need to buy the idea that reincarnation can lead monkey ghosts to come back and visit their human parents to be awed by Uncle Boonmee Who Can Recall His Past Lives."

"Notwithstanding what Keiller explicitly discusses on the film's soundtrack, these daring and sometimes beautiful juxtapositions of words and images suggest themes of their own," writes Kenji Fujishima at the House Next Door: "the sometimes debilitating effects of the passage of time on a landscape; the terrors and beauties of encroaching modernity; the depths of history that a photographic image hides; the vastness of the world and the relative insignificance of human problems within it. Keiller's visual strategies at times reminded me of John Gianvito's great 2007 documentary Profit motive and the whispering wind, in which images of historical landmarks were shot in ways that suggested the overwhelming vastness of history in seemingly ordinary settings; the only difference, of course, is that Gianvito allowed those images to speak eloquently for themselves, allowing his framing and editing to create its substance."

For Time Out New York's Joshua Rothkopf, "Robinson in Ruins is a case of willful obtuseness, both on the part of the filmmaker (who swaddles gorgeous 35mm footage of British nuclear silos and poppy fields with a dull Vanessa Redgrave narration) and the festival's selection committee, squandering the chance to introduce us to a stronger work."

Sean Glass attended the press screening for Ioncinema: "Keiller discussed his process afterwards, explaining that he works with a 'recipe' or 'itinerary' more than a script per se. The first two films had very specific 'recipes,' with this one being looser, 'less ground in more detail.' The camera subjects are identified beforehand, then they go out and shoot. A fine cut is created before the narration or narrative is even thought of."