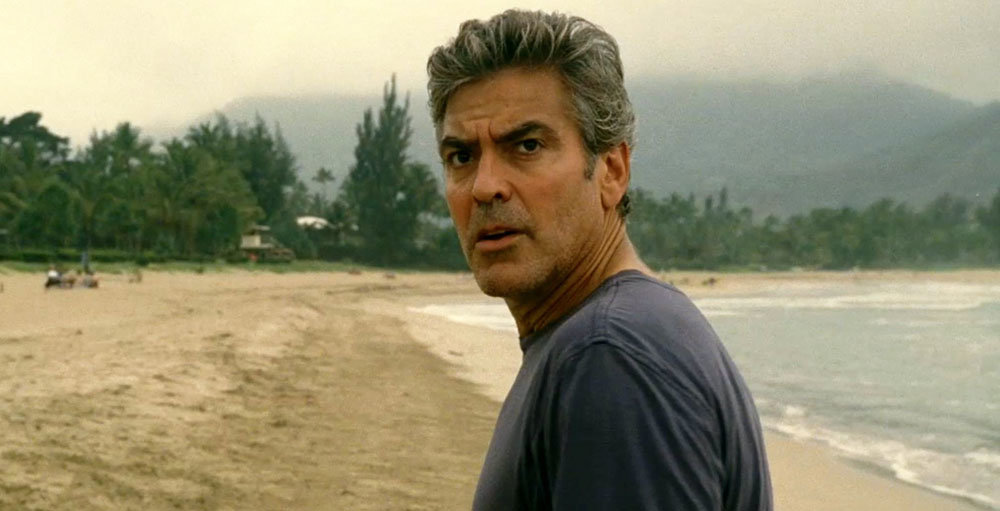 "Alexander Payne's first feature in seven years seems much less marked by schadenfreude than his previous efforts," writes Leo Goldsmith at Not Coming to a Theater Near You. "At times, it seems downright sincere, narrating as it does the tale of a busy, midlife crisis-ready lawyer from Hawaii — played by reliable George — whose life is upended when his wife Elizabeth suffers a waterskiing accident and is stricken with a coma from which she will never recover. Add to his woes a pair of unruly daughters, each on opposite sides of puberty, a super-important real estate deal in which his family plans to sell off some pristine beachfront wilderness to some kind of resort hotel developer, and the revelation that his wife was cheating on him before her accident, and one finds a set-up for a film that's very much of a piece with Payne's other portraits of dysfunctional middle-aged white guys…. If it is a critical cliché to say that a particularly daring film on a given subject is 'unflinching,' then this movie is the most flinching I've seen in a long while."

Writing for Filmmaker, Howard Feinstein notes that The Descendants "retains some of Payne's signature devices, such as voiceover, focus on a flawed character attempting to cope with a barrage of personal and social problems, and a perceptive feel for setting. What it lacks in comparison with his earlier work is comic edge, poignancy, and a strong sense of opposing forces at work.... As usual, this is an adaptation of a book, Kaui Hart Hemmings's 2007 novel of the same title. Reviews I've read of the book gush over its comic elements — so where are they in the movie?"

The New Yorker's Richard Brody posts a few notes, and here's one of them: "The Academy doesn't award an Oscar for casting; it should, and I'd be surprised if, were one to be given, this year's wouldn't go to Payne and his casting director, John Jackson, for putting together a group of actors, most of whom are relatively unfamiliar or are best known for TV work (such as the remarkable youths — Shailene Woodley, Nick Krause, and Amara Miller, whose first film it is — and Judy Greer and Matthew Lillard), and some of whom (I'm thinking especially of Robert Forster and Beau Bridges) lately haven't had roles up to their talent."

Nick Pinkerton talks with Payne for the Voice, noting that the director, "free-range in a film culture fenced off into art house and multiplex, to the detriment of both," has been "very, very lucky. The trajectory of his career has been an ongoing parallel rise in box-office success, critical estimation, and final-cut clout, from abortion satire Citizen Ruth (1996) to Election (1999) — much-cited in the 2008 Democratic primaries for its main character's not entirely flattering resemblance to Hillary Clinton — to the twin watersheds of About Schmidt (2002) and Sideways (2004). With the first, Jack Nicholson's participation made Payne a star; by the second, Payne could do the same for Paul Giamatti." As for his absence since then, Payne says, "It just happened. '05 was a washout, '06, '07, '08, a lot of that time was spent writing a screenplay with Jim Taylor that we haven't made yet. Late '08 I was so anxious to beat up on actors that I did a pilot [HBO's Hung]. And then in '09, I started work on this. It just happened, I don't know where the time went."﻿

Updates, 10/17: "Payne has made not only what may be his best film, but one of the very best films on the subject of grief," argues Jaime N Christley in Slant.

For Elise Nakhnikian at the House Next Door, this is Payne's "best film since Election, aside from the segment he directed for Paris je t'aime."﻿

Now then. "Payne keeps things pitched at the level of sitcom, not necessarily a bad thing," writes Michael Koresky in Reverse Shot. "Yet for all of Payne's occasional broadness, The Descendants is the most subtly pitched of his films — the comedy springs out of uncomfortable situations rather than slapsticky set-pieces (Sideways' surprising strength) or easy laugh lines, and the Omaha-born Payne's emphasis on its Hawaiianness — the soundtrack is wall to wall with laidback songs perfect for your very own luau; even the Kings' dining room is wallpapered with palm trees — is more simply atmospheric than regionally patronizing (imagine the Coen brothers' own Hawaii film for how much crasser a picture could be painted)."

Payne is "already putting the pieces together for his low budget, father/son road trip drama Nebraska," reports the Playlist's Kevin Jagernauth. "Granted, with his aim to deliver the film to theaters in black-and-white means that Paramount is only giving him $10 million to play with and it will be contingent on getting a major star to sign on (Gene Hackman, Robert Forster, Jack Nicholson and Robert Duvall are some of the candidates being tossed around). However, as he begins to do the press gauntlet in the run up to The Descendants, Payne spoke with Thompson On Hollywood and revealed his long absence from movie screens has due to the 'time suck' of his long gestating project Downsizing — something he still hopes to make — and that he's willing to play ball with the studio and deliver a color cut of Nebraska if required for television." Payne describes Downsizing as "a large canvas, science-fiction social satire" and an "epic masterpiece."﻿

Earlier: Reviews from Telluride and Toronto. For news and tips throughout the day every day, follow @thedailyMUBI on Twitter and/or the RSS feed.﻿