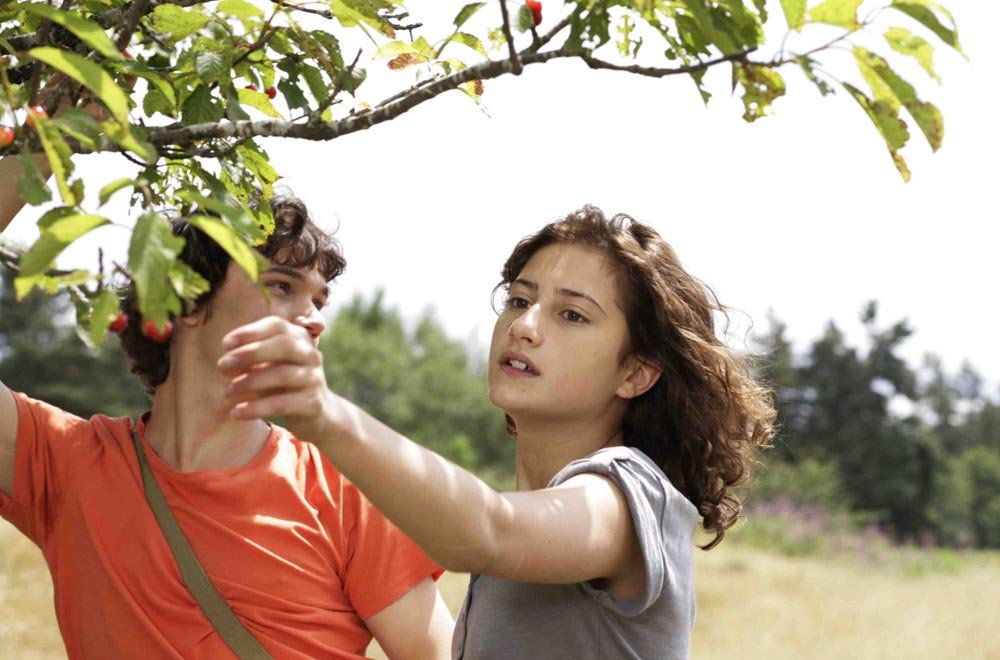 Mia Hansen-Løve's third feature, Goodbye First Love, "seems to advance by intuition," suggests Ben Sachs at Cine-File: "you can never predict where it's going. The story follows Camille (Lola Créton) and Sullivan (Sebastian Urzendowsky) from adolescence, when they're high-school sweethearts who go through a traumatic breakup, to their mid-20s, when they reunite after several years. Nothing happens comfortably or predictably: Hansen-Løve will devote several minutes to a seemingly mundane action, then bring the plot several months into the future with a simple, unassuming edit. (The greatest elisions, usually skipping over a few years at a time, are denoted by elegant fade-outs that suggest the line breaks in a poem.) Likewise, the movie generally seems tied to Camille's perspective, though it shifts at several critical moments to depict things that happen only to Sullivan. It's puzzling as to just whom or what is guiding the movie's attention; perhaps it's the characters' passion itself, which has transformed the film's structure no less radically than it has the characters. Hansen-Løve is playing with aspects of narrative movies we usually take for granted — such a consistent perspective and a clear sense of time's passage — and turning them inside-out. The result is a movie that seems organized not by events but by their emotional impact."

"Hansen-Løve treats it all less like a hot coal and more like a fedora lost in the breeze," writes Jay Kuehner in Cinema Scope. "Herein lies the quiet force of the film, in its evocation of a parallel slipstream of time that may even be indifferent to its heroine, who seems to mature hazardously, wondrously before our very eyes (Lola Créton will be the next pouting-faced star of French cinema). Goodbye First Love plays like an old Françoise Hardy song, its lachrymose-by-numbers shape belying an ineffable sorrow of time passing, of love's un-return."

"First seen as a monster's enigmatically tender child-bride in Catherine Breillat's Bluebeard, the 17-year-old Créton returns with a performance that should ensure a long career as a Gallic queen of the art house," writes Eric Hynes in the Voice. "There's an integrity to her performance that converts what could be seen as soap opera — ricocheting between lovers and towns — into something emotionally and philosophically true. She's fully herself when acknowledging that she has dual affections and desires."

Noel Murray at the AV Club: "Hansen-Løve both romanticizes the fervor of adolescent relationships — particularly the way that young lovers feel prematurely like grown-ups — and illustrates why they're untenable. The result is a movie that's poignant, bittersweet, and true." More from Kenji Fujishima (House Next Door), Karina Longworth (Voice) and Alicia Van Couvering (Filmmaker).﻿

Michael J Anderson: "Goodbye First Love adds to the 30-year-old Hansen-Løve's burgeoning auteurist credentials — which at this early juncture remain no less pubescent — as do the film's crisply biographical features, from Camille's romantic relationship with her intellectual and professional mentor, Magne-Håvard Brekke's Lorenz on screen and Olivier Assayas off, to the film's renewed emphasis once again on practical artistic creation, which in the director's latest finds a cinematically analogous form in the architectural medium. Hansen-Løve's world appears very conspicuously in Goodbye First Love. So too do the director's filmic antecedents, whether it is Assayas's Late August, Early September (1998), in which Hansen-Løve received her first screen credit (as an actor), and which increasingly feels generative of her entire body of work, or Eric Rohmer's corpus, with the 'Comedies and Proverbs' and his supreme masterpiece The Green Ray (1986) especially key for Goodbye First Love."

"Like the second half of Hansen-Løve's previous film, The Father of My Children, this is in some ways a movie about a teenage girl who decides she wants to be in the world," writes the L's Mark Asch. "For a film about change, one of the biggest undergone in Goodbye First Love is the meaning of the title, which begins connoting bittersweet youthful reverie and ends as a hopeful promise of something newer, better."﻿

Update, 10/17: "While this is only Mia Hansen-Løve's third feature film, Goodbye First Love still indicates a point of departure for her, a new style of symbolic, nostalgic storytelling," writes Anna Bak-Kvapil for Fandor. "Here she's taken a large step toward combining her most personal experiences with ambitious cinematic goals, sweeping through summer and winter, city and country, youth and age."﻿

Update, 10/18: "Hansen-Love, as the title of her film suggests, poignantly emphasizes the inherent sadness of growing up," writes Benjamin Mercer in Reverse Shot. "After a time, the viewer also might feel a twinge of sorrow that this film, which is often so perceptive about matters of the heart, is finally unable to reconcile its sprawling structure with its elliptical style."﻿